It’s a small miracle that I make it to Star & Garter at all. I’ve been plenty of times before but I’m walking from a different part of Manchester, so I consult Google Maps to see if there’s a quicker route. There is! Or, well, it looks like there is, until Google leads me down an alley that has more in common with a motorway siding than a footpath, all mud, brambles and metal railings, to somewhere that is definitely not the Star & Garter.

Fortunately, I do know where the venue is, so I navigate blind through Mancunian highways and make it to the pub just in time to hear the soundcheck. Doomy bass rumblings tumble down the staircase under a howled, guttural mic-check. It’s already sounding beautifully bleak.

Local three-piece Leeched open with a surreal salvo of window-rattling noise and the guitars proceed to squeal with distortion between every song. They drop into an onslaught of progressive, hardcore darkness that the fairly sizeable crowd is already enjoying. I don’t understand a word the singer growls, which is typically a good sign. The drummer is delightfully terrifying, corpse-pale apart from his facial tattoos, playing cloaked in a black hoodie, slowly shouldering his way through a feral onslaught of blast beats. There is an angry cry of, “Why are you not moshing, people? Please mosh for the next one,” which turns out to be a surprisingly polite request from a punter spitting into the stolen mic. Leeched continue to trudge through a catalogue of crusty dark metal that’s low and heavy, ending on a drawn-out decrescendo of six-string distortion.

Gets Worse are up next, offering an assault of songs that are short, heavy and fist-in-the-gut ferocious. This heavy 4-piece from Leeds shake the room with supremely fast powerviolence sections, punctuated with low slow-motion mosh breaks that expertly build anticipation for the next attack. Above the patchwork of heavy metal shredding are caustically spat vocals. All members of the band contribute to this, but it’s the drummer somehow making time to tear words from his throat that offers the fiercest noise. They slide catastrophically into harder, heavier songs with a handful of quieter, bass-led pauses. The bleak crunch of distorted guitars primes the room both for soberly dressed, serious head-nodding and frantic elbow-smashing bursts of hardcore.

We are fortunate that Boak have made the trip down from Aberdeen for this show. This fierce duo churn out brutally fast, savage powerviolence, laden with doomy, dark chords and growled, aggressive vocals. Each tune is like a rollercoaster hurtling full-throttle in to hell: frantic, breakneck fast and stomach-churningly exciting. The speed with which vocalist/guitarist Dave Robertson’s hand dances over the frets is staggering, creating a rib-rattlingly loud force of low, overdriven noise, with the odd squealing fret-slide thrown in.

It is frenetic, fist-in-the-air carnage down the front for the whole set, although a minor stage invasion from an overly enthusiastic gruff-lunged fan is not entirely welcome. Boak are also responsible for the first scissor-kicking stage diving adventures of the evening. It’s the kind of empowering hardcore that makes you feel alive; a wall of noise that invades your chest cavity and inspires utter chaos.

It turns out that Corrupt Moral Altar are as brutal as their name suggests. It’s catastrophically fast, earth-shattering hardcore underpinned by the occasional sludgier metal guitar groove. The crowd worship them, moshing, hunched over and hurling themselves round the dancefloor. The energy in every song is infectious, offering that joyous kind of blood-boiling that you only get at grind gigs. The percussion is a machine-gun attack beneath it all, although the drummer maintains a face of calm placidity throughout – one of those clever bastards that makes it all look easy. 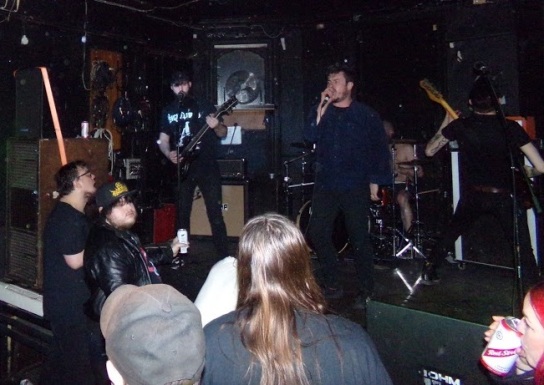 Corrupt Moral Altar’s edge comes in vocalist Chris Reese who alternates between ferocious growls and piercing shrieks every few seconds, evidently willing to sacrifice his own throat in the name of extreme songwriting. I’m most impressed that he’s capable of gripping the microphone between his teeth while screaming, hands raised in the air. Without an instrument to waylay him, he’s free to careen energetically around the lip of the stage, adding physical emphasis to the lyrics and interacting with the audience. There is zero opportunity to get bored. Between songs, Reese speaks quite soberly about the topics of the songs, which adds an amusing juxtaposition to the shudderingly heavy song intros that follow. “It pleases me that you’re all having a nice time,” he says to the crusty, beer-soaked moshpit, “Let’s make hay while the sun shines.”

Corrupt Moral Altar are a thoroughly watchable, exciting act that I would recommend to any fan of all things fast. Overall, it’s been a ferocious evening of full-throttle hardcore: the perfect way to hurtle you face-first into the weekend.