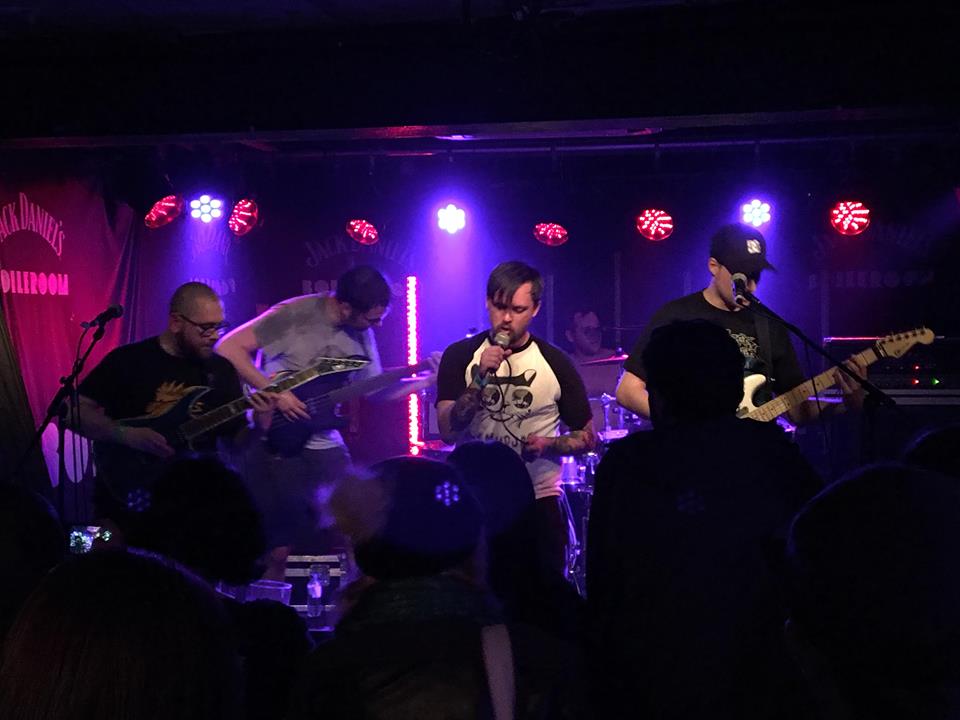 Review by Joëlle Laes. Photos/videos by Mirjam van Reijen, plus some snaps from Joëlle.

After so much anticipation created by the advent calendar announcements via social media, I couldn’t wait for the Bonsai Mammoth anniversary all-dayer, hosted by Darko, an event celebrating a year since the release of their epic debut album. Every announcement seemed like a gift that was personally selected for me. “You like this band? OK cool, we’ll book them.” Thanks guys. Perfect lineup.

Some of my friends decided to get the ferry over the UK from Belgium, and I was lucky enough to snatch a seat in the car. Getting up at 5am the day before to make the trip over and paying a fortune for a hotel was a bit of a faff, but hanging out with friends and seeing fantastic bands makes up for the lack of sleep and the hole in my wallet. After a good night’s sleep, it was time.

It couldn’t have started better than with a Punk Rock Yoga Session by Jo from Bad Juju Yoga! I, however, got my myself in gear too late and missed it.

Though 2pm seemed like an early start for most attendees, the room filled up nicely for the first set of the day. Darko kicked off their anniversary all-dayer by playing Bonsai Mammoth in its entirety (Sarah recently talked to the band about it – check out the interview here). Watching them, for once completely sober and still half asleep, was an experience to remember. With nothing clouding your judgement, you begin to realise how darn good they actually are. Mesmerised by their guitarwork and vocal harmonies, head bopping commenced amongst the crowd. It definitely set me up for a good mood the rest of the day.

Totally new to me, Wild Tales follow them in getting people hooked by some more indie-ish, danceable tunes and good vibes. This new project from members of Trails and Atiptoe are rather different from the rest of the lineup, in a good way. I was sad to see that they don’t have any music online yet, however I’ve been told this bunch from Guildford will have an EP out soon.

The moment I had personally been waiting for finally arrived. The Affect Heuristic, a band consisting of both Belgian and Scottish members, started setting up for their first gig ever. It’s a strange feeling seeing them live for the first time after witnessing the whole writing process happen in my house. It’s safe to say the crowd was blown away by this shredfest, intertwined with Scottish banter and deep lyrics. The tracks Against The Grain, which addresses toxic masculinity, and Tightrope hit especially hard. For those eager to listen, you can check out two demo tracks here.

It’s been a while since I’ve seen Laughing In The Face Of perform live, but it’s always nice to catch this rather techy melodic punk rock ensemble from Birmingham. Though taking their sweet ass time (I’m impatient, okay?!) between records, they appear to be tracking drums for some new songs. Excited!

Head bopping and singalongs were provided by London’s very own Screech Bats. After seeing them for the first time at Punkle Fester I’ve been slowly getting more and more into them. This performance was nothing but stellar… I absolutely adore the vocals of singer (in Flemish we’d say she had ‘a voice like a church bell’) that goes perfectly with the rock ‘n’ roll vibes they bring through their music. After releasing a banging EP in 2017, they recently announced a follow up Wish You Were Her, to be released on March 30th.

Onto more raw scruffy vocals brought by The Burnt Tapes, also hailing from London. To be fair I hadn’t listened to them enough before, but damn, this was good. I’m looking forward to listening more and catching them on their European stint mid-February.

My eyebrows raised when Manchester’s Fair Do’s entered the stage. Where’s the bass player?! Apparently Josh had prior engagements, such as photographing a wedding (priorities mate!). To be fair, even without bass Fair Do’s definitely have not lost their touch. They’ve been playing some new tracks recently that make me feel like their next release will be an absolute beast. Top notch highly technical melodic hardcore. Let’s hope we won’t have to wait much longer!

Whoever came up with the idea of a one hour dinner break is a genius. It gives you time to grab something to eat and replenish your energy levels without having to miss out on any bands. Could this become a standard for all dayers? Off to Waitrose for a sandwich and some hummus! Gotta get those staples in.

A little while later I hear a snippet of music from afar and run into to find Drones already halfway into their set. Damnit! I’ve been looking forward to seeing this band live for a while. They didn’t disappoint. Although it wasn’t necessary, the singer sure didn’t seem shy of acrobatics to entertain the crowd. If you want to keep up, a punk rock yoga session comes highly recommended; I’m sure we could all use one.

Bringing back the Scottish banter once again is PMX, all the way from Perth (pronounced “perfff”). I often wonder if anyone else understands what they are actually saying. Being influenced daily by Scottish dialect, I think I got lucky. Banter aside, they’re quite good at bringing catchy hooks and melodies, or the blistering technical fury we’ve all come to expect and love. If you don’t know who I’m talking about, check out Sarah’s two part interview with them.

Headlining is the Italian three piece Actionmen. Extraordinary, eclectic and excellent are the three E’s I’d use to describe Actionmen. Spurred into dancing by Pee Pee Island (dare I ask?) we were in for a treat. They might not be understood by all, but they are definitely praised for their musicianship. Quite possible the most danceable band I’d seen all day.

Back to the hotel for some snacks, followed by a comatose sleep. The next morning I was treated to what must be the first hangover I’d had in years, but for an all dayer like that, I’ll gladly suffer any day.

Joëlle is the Belgian fifth of Less Talk More Records, an international non-profit collective who aim to help release and promote skatepunk records.  Be sure to check out LTMR if you like your punk fast and technical. They’re also part of the awesome PNKRCKR Collective.