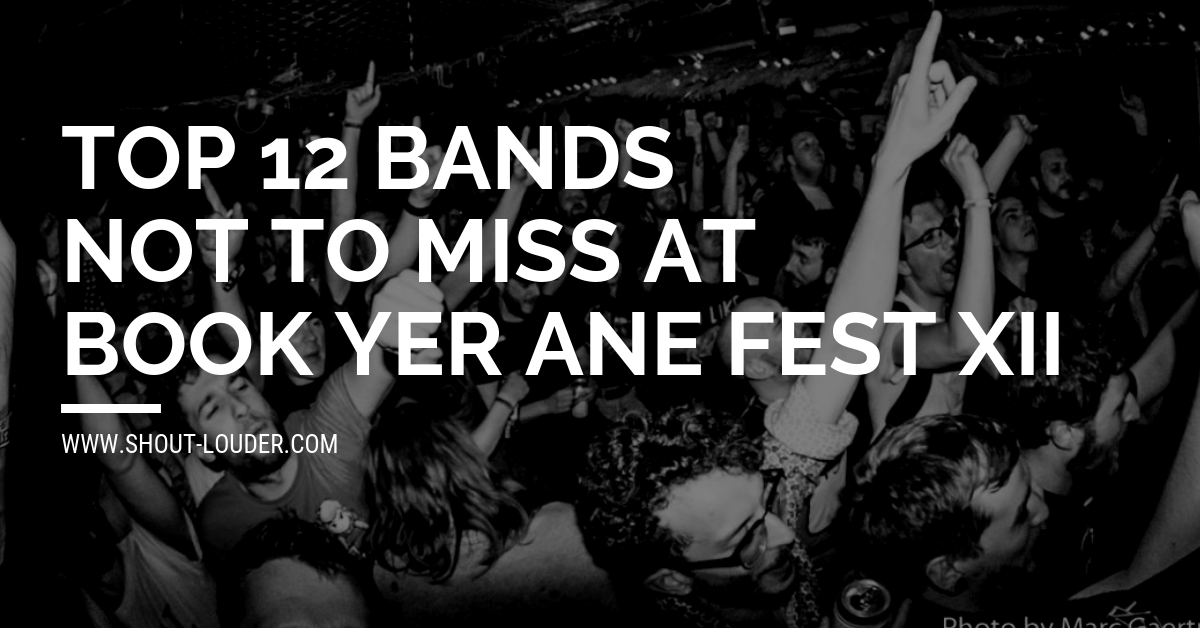 Book Yer Ane Fest is a gem in the UK punk rock calendar. Over the years I’ve heard the name whispered, dropped into any conversation about the best punk festivals, but it’s shrouded in an air of mystery. Perhaps because of its wintry date (November 30th – December 2nd) or its ‘foreign’ location (taking place in the Scottish coastal town of Dundee), it’s sometimes overlooked on circuit English festival-goers follow.

I’m here to tell you the trip is more than worth it. Every year Book Yer Ane Fest has a stunning line up – an exceptional selection of the best DIY punk bands the UK has to offer, plus some choice selections from overseas, handpicked by the crew at Make-That-A-Take Records. They’re spread across two venues over three main days, with pre- and post-fest shows and a host of labels, zines and chartiable causes.

There are some absolutely incredible bands on the BYAF XII line-up, however we’ve picked out ten for you to check out.

N.B.: I’ve excluded a couple of my all-time favourites as they’re too ‘obvious’, but you should all clearly go and watch The Burnt Tapes, Forever Unclean, Roughneck Riot, Tim Loud and Uniforms, and all the other bands too!

Catchy, delightfully intelligent lyrics, with a rousing undercurrent of anger much needed in this brand of acoustic-led indie punk rock. From Edinburgh, Paper Rifles released a sterling album The State Of It All in March that is an instant love affair.

Having recently released Fears via Little Rocket Records, Irish alt-punk trio Lost Avenue have been touring heavily round. Their songs are powerful, driven and loaded with irresistable hooks.

This new London-based melodic punk project are another gem from the Little Rocket Records roster. Another band who’ve been gargling razorblades, Mean Caesar’s self-titled EP is, in the words of our review by Ollie Stygall, “A sharp collection of brash yet melodic punk rock that draws influence from Hot Water Music and the much beloved Leatherface. Each track is packed with more hooks than a fisherman’s tackle box and more drive than an episode of Top Gear, all capped off by vocalist Danny Lester’s impassioned, gruff bark.”

These passionate Scottish pop-punks may be inspired by misery, but they’re bound to play one of the most uplifting sets of the year to a local crowd at BYAF. Having released their second EP Misery Punk Ruined My Life recently, this is a band destined to do great things. Get ready to fall in love with Goodbye Blue Monday.

Worcester-based punk rock quartet Fights and Fires are a band that pride themselves on having fun and truly enjoying themselves, whilst delivering chaotic, passionate rock-and-roll-inspired hardcore shows. It’s going to be a proper treat to catch them in Dundee.

The Affect Heuristic are half-Belgian and half-Scottish melodic hardcore act, so this is half of a hometown show. Taking influence from a diverse range of sources, ranging from classic EpiFat acts to tech metal and pop punk, they have created a unique sound that’s as heavy as it catchy. They’re one of my favourite new discoveries of 2018; they slay live.

I’ve not been able to catch Austin Lucas live before, however he’s been a result recurrance in drunken 3am YouTube sessions in recent years. He offers an enticing slice of Americana that’s not the typical hallmark of a punk rock show, but he’s got a voice that’d woo angels.

Revenge Of The Psychotronic Man

BYAF is going to be Revenge’s penultimate show, after 15 years of relentlessly boozing, touring and talking shit. They’re a band who put 100% into every single show and there DIY punk scene will be worse off without them – you’re guaranteed to have a good time. Come give them a proper send off.

BYAF represents the album launch show for Kaddish’s third album What World Was Still? I’ve been introduced to the concept of ‘eccosemo’ this year and somewhat fallen in love with it – a noisy, disenfranchised take on emo/punk. This is a rare show and definitely not to be missed.

What more do you want from a festival after-party than some ridiculously gnarly grind? I caught Boak earlier this year and was thoroughly impressed by their brutally fast, savage powerviolence, laden with doomy, dark chords and growled, aggressive vocals. To quote myself, “Each tune is like a rollercoaster hurtling full-throttle in to hell: frantic, breakneck fast and stomach-churningly exciting.”

Although they describe themselves as melodic hardcore, what sets Manchester (or thereabouts) quintet AVAS apart is their strong New York Hardcore influence – they’re the closest thing I’ve ever seen to Suicidal Tendencies rioting in the back of a Salford boozer. Proper good live, have at it.

I bloody love Fair Do’s and I was seriously excited to see that they’re playing the Sunday of Book Yer Ane Fest. They are an unrivalled powerhouse of technical melodic hardcore, who combine hardcore punk and metal in a way that few other bands manage.

Very reasonably priced tickets are still available from here. You can find information about the festival here and follow the event on Facebook here. We’ll see you down the front!