“Like Minor Threat had been dragged through every bar in Manchester,” Incisions are ready to tear your world apart.

Incisions are a fresh, no-nonsense, blast of fury from Manchester, who’ve just announced that they’ll be releasing their self-titled debut album via DIY legends TNS Records in December.

Incisions’ Quit Now was one of our Top 5 Releases of 2017 and their new material promises even more exciting things. Seen live, their fast, take-no-prisoners approach captivates audiences.  We spoke to vocalist/guitarist Jordan Lloyd to get the latest on their new album and their plans to conquer the scene.

Hey Jordan! How would you sum up Incisions for someone who’s just discovering you?

Hey! We are heavily influenced by all the hardcore bands and Slayer but like to try and bring a bit more melody into the songs. We try to play everything as fast as we can. We recently were told we are ‘the audio equivalent of a brick through a window’. I liked that.

Tell me a bit about how Incisions came to be – how did the band form?

I moved to Manchester a few years ago ’cause I wanted to start a band and there place where me and Steab (guitarist) grew up had no music scene at all. I found a really good drummer. We put an ad out for a bassist and met Mandog. We then met up at the first Manchester Punk Festival and obviously MPF is enough to make anyone want to start a band… we were both pretty overwhelmed by the whole weekend as is the case for everyone that goes, so we were much more serious about what we wanted to do after that.

Our drummer moved back to Spain before we really got going, but Tom joined straight away and then took it up a level. We’d written our first EP after a couple of weeks. Tom left just after we finished recording Quit Now. Stefan has been playing live with us since the second EP.

You’ve undergone some line-up changes since then, too. Give us an update – what’s the line-up looking like now?

Yeah, Archie (a.k.a. Betty Egg) from Clayface is playing bass for us now which is ace cos I love him and he’s pretty easy to influence when I want to go out and get drunk.

Andy is now playing drums for us he plays in Animal Byproducts as well, he’s from Barnsley so none of us can understand a word that he says but he seems friendly.

Stefan is still killing it on his snide Gibson and they all still have to put up with me!

I was completely gripped by the Quit Now EP you released last year, in fact it was in our Top 5 EPs of 2017. How does the album differ to the EP musically?

Yeah, thanks for that. We were really proud of making that list!

I think we started to find our sound when writing the last EP but we had come to terms with it when we wrote the album, so this was a bit more focused in that sense. Someone said it sounds like Minor Threat had been dragged through every bar in Manchester. I think it’s a bit more direct lyrically than the EPs have been and there are more riffs. 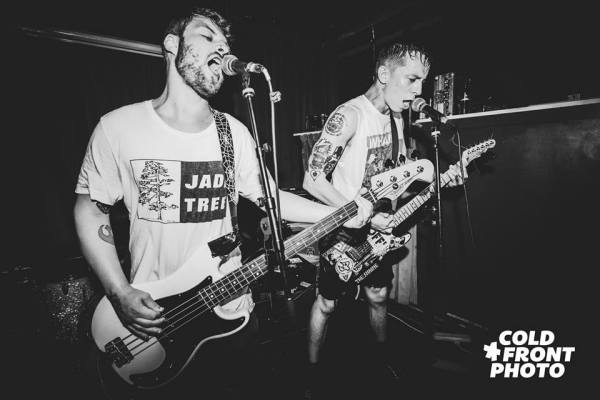 Your album’s self-titled. What is it about this record that you think defines Incisions?

Most of the songs are pretty personal, about things that we’ve been through or things that we stand against as a band so it is a strong representation lyrically. Also, it’s fast.

My favourite thing about your songs is the aggression and the urgency behind them. You don’t fuck around lyrically. Is that a deliberate choice, and are they any points your trying to get across on the new album?

Yeah I would say it is deliberate. Definitely when we are writing about politics which we do a few times on the album. Maybe not so much when it is more personal, I usually figure out what those songs are about after we have written them. I don’t think there are any points that run throughout the new album. We write songs about a lot of shitty things that are going on in the world or our lives. Obviously, there are a few songs about the fucking Tories and their mates.

You’re releasing Incisions through TNS Records which, as a rowdy Manchester band, seems like a match made in heaven! How did that come about? Are you excited to be working with them?

We are so proud that we are getting to put our album out on TNS. Those guys work so hard and, now that we have taken the blood oath and are in all of the secret meetings, it’s only made it more clear how lucky we and all our favourite bands are to have people like Andy and Bev and everyone else associated working so hard to help us reach new people.

Like every Manchester punk band does starting out, we hoped TNS would take a chance on us. It was actually the only thing we set out to do when we started the band.

My point is that makes us not only the strongest but also the most successful band in Manchester.

Manchester’s got one of the strongest punk scenes in the country. Do you think that’s made a difference to your sound?

Absolutely, we’ve got to see and play with so many amazing bands coming through Manchester who have influenced us thanks to how spoilt we are for fucking brilliant promoters.

Growing up in the 90’s bands it was impossible to avoid Nirvana, The Offspring and Green Day but they were a big reason I think most of the band started digging into punk. Hearing The Clash was the catalyst for everything for me though.

What’s inspired you most musically when writing for Incisions? Are there any new bands that are getting you excited?

For this album, Poison Idea, OWTH, Grand Collapse, Youth Avoiders, Pizzatramp, Slayer, Swingin Utters were probably the biggest influences. There are so many great bands about at the minute; we played with a band called Careering the other week, they were fucking brilliant. Obviously Aerial Salad are smashing it ’cause they are ace. We became friends with them when we had both just started our bands. We played a crusty gig at the Star & Garter and I think all three of them had Lagwagon t-shirts on.

What do you guys most like to do when you’re not playing music?

Fair amount of drinking. Love a bit of karaoke. Andy is well into vaping. Stefan has got a tattoo shop in Liverpool (The Crypt). Me and Archie mainly just hang around in town swearing at each other and intimidating people.

What are your big plans for Incisions in the future?

Get more likes on Facebook than Pizzatramp. We’re gonna stop being lazy and start touring. We want to play some of those festivals that have made some of our mates so famous aswell.

Incisions are due to release their self-titled debut album through TNS Records in December. Shout Louder are huge fans of this band, and we strongly recommend pre-ordering it now and making sure you get down to one of their live shows.