Shout Louder’s picks of the best short releases of the year.

It’s been an extremely strong year for releases in the world of punk. For the Shout Louder end of year round-up, I’ve decided to embrace the classic Top 5 format. Over the next few days you can enjoy all of the following:

First up are my Top 5 EPs of the year. This was a real struggle. As a cheaper and easier alternative to a full-length album, it seems to be the format of choice for many of the bands I favour at the moment. There were more EPs vying for the top spot this year than there were albums.

Just short of making the cut was Alaska Alaska’s Another Planet’s Hell. I have also listened to No Trigger’s Adult Braces a hell of a lot, however it’s mostly on the strength of one song – Dogs On Acid. I ought also mention On A Hiding To Nothing. They are one of my favourite live discoveries this year, and their EP Formaldehyde is stupidly fast, complex and awesome. 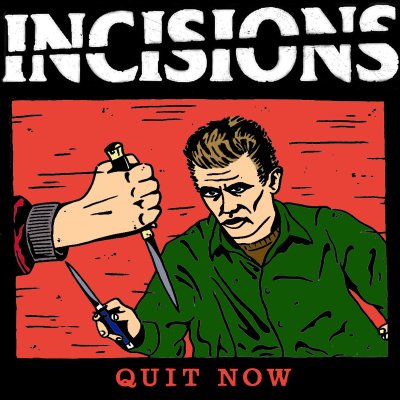 Incisions are a gutsy foursome from Manchester who create proper, noisy fast-punk full of swagger. It feels like they’ve taken a rowdy punk band and added a hard rock guitarist, driving the songs with irresistible riffs and grooves. Jordan Lloyd’s coarse vocal and snappy fuck-off lyrics tie it all together, dripping with attitude and agression.

Absolutely zero fucks were given in the making of this record. Or, at least, that’s what the attitude in the lyrics convey. In reality it clearly takes a lot of talent to make an EP this good while making it seem effortless. I loved this the first second I heard it, and my only regret is not seeing it played live until November. Live or recorded, Quit Now has an undeniable power to make you to rock the fuck out.

I have to thank Colin Clark’s impeccable music taste for this one. He recommended this band to me earlier in the year, shocked that they only had ~100 Facebook followers despite producing an incredible record. It’s five tracks of bouncy, fast acoustic folk-punk that’s pleasantly uplifting, in a similar vein to bands like Jake & The Jellyfish. Call In Sick has shed a bright beam of positivity on 2017 for me, and I want to share it with everyone.

Coming from Bristol, Toodles & The Hectic Pity produce quick, snappy and percussive punk ditties, overlaid with witty lyrics, delivered in a vocal style that cracks and strains and makes you want to sing along. My favourite song is by far the title track, hitting a real nerve with me with the words, “You shouldn’t have to work so hard to barely get you by.” The theme of the song in part gave me the confidence I needed to leave my job and change my life this year. Well done, Toodles, it’s an incredible record.

The latest release from Danish trio Forever Unclean is four flawless tracks that are scrappy, shouty and upbeat. They hit the grittier end of the pop-punk spectrum, incorporating the speed and skill of skate-punk and the lyrical angst of indie-punk. The record is driven by huge hooks and full-frontal guitar riffs that will to appeal big time to fans of Gnarwolves and PUP, played in the gorgeous rich tones of bands like Hard Girls. Lyrically the songs are a sharp and destined to be screamed back by a big audience, at it’s best on the end chant on Worthless, “Do you know, you make me feel worthless?”. They’ve successfully juxtaposed positive sounds with negative sentiments in the way that will strike a chord with any listener.

I was immediately grabbed by the colour scheme and artwork for Float (which is available on lovely bright orange vinyl via Disconnect Disconnect), and I was hooked in immediately by the title track. Float is a small slice of punk perfection that always leaves me wishing for more.

I was completely floored the second I discovered this EP. Lifer was released on Lockjaw Records and Charlie’s Big Ray Gun Records in August, just in time for their performance at Punk Rock Holiday. I popped this on in the car on the way home and have had it on repeat ever since. I think I must have told everyone how in love I am with Sombulance’s technical melodic hardcore, including my colleagues, my housemate and my long-suffering Dad (all of whom could not care less). Now I’m telling you.

Lifer doesn’t have a weak moment and leaves me wanting more, as any EP should. I’m impressed by the complex composition; the guitars organically weave together in a melodic cascade that leaves me thinking of waterfalls and thunderstorms. Dean Harwood’s supreme vocal clarity is what gives this an edge over other hardcore releases, and I love the way the lyrics read like a thesaurus page. There is an overwhelming amount of talent in this band and I hope they do more in the future. Check out our full review here.

I think it will come as no shock that Alterations has topped my list for 2017. It is six tracks of strong, sombre sing-along material with subtly faultless melodic backing. Burnt Tapes have grown enormously in the last 18 months and they’ve effectively established their own genre of ‘regret punk’. I believe it exceeds the Iron Chic comparions they often receive; it’s more relatable, with a grounding in skate- and pop-punk sensibilities. I also reckon they could give Iron Chic a run for their money for writing lyrics that pair well with cat photos. 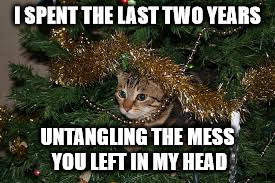 As a long-time advocate for all things gruff, it’s Pan and Phil’s equally gritty vocals that cause this record to really excel in my estimation. The lyrics paint a picture of self-deprecation and angst that I find intensely appealing. It’s at its best on Things Get Weird: “Cause I am, I am the worst you’ll ever have. You move like a summer dress in the breeze, asunder memories.” There’s a theme of nature and seasons that runs throughout the EP that pairs beautifully with the stripped back line-drawing of the tree on the cover. In an aside, I’m totally pretending I have a Burnt Tapes tattoo now. 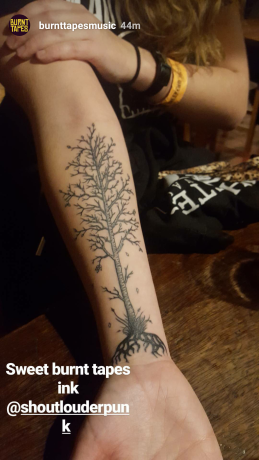 The Burnt Tapes aren’t brash, aggressive in-your-face punk, so the quality of this release may not immediately strike you. It’s a record that I grow more fond of with every listen, and my only complaint is that there’s not more of it. Check out our full review here.

Keep an eye out for our other End of Year Top 5s: