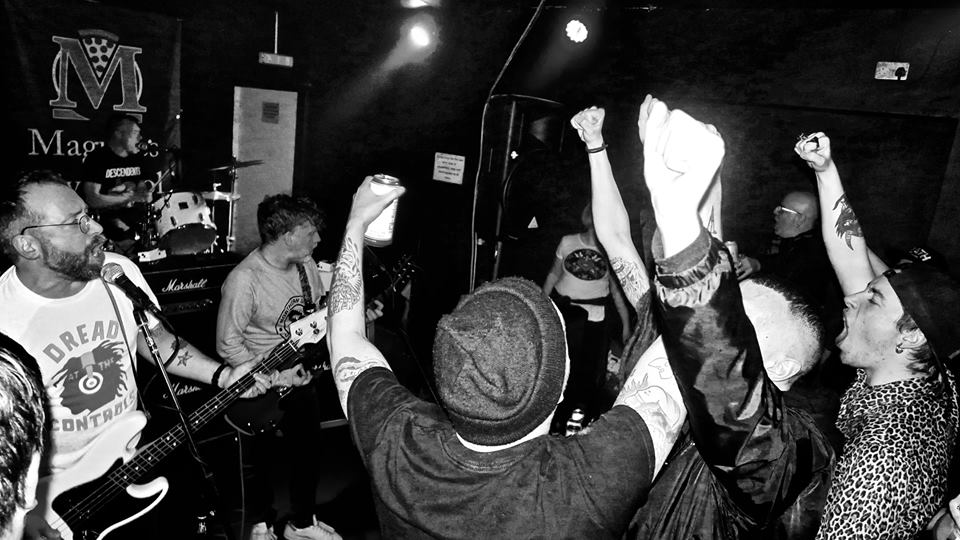 Before this show had even begun, I was brimming with excitement. It’s my first gig of 2018, my first time in Liverpool and (this is a totally irrelevant personal achievement) the first time I’d ever driven to a gig. On top of all that, I got to start my year off right with a trip to see Consumed.

For years I’ve heard my Northern punk pals raving about Maguires and it’s easy to see why. At the front it’s a tiny, colourful bar that boasts an impressive menu of vegan and vegetarian pizza options. Knowing that I can’t miss this opportunity to sample some proper cruelty-free fast food, we plump for a vegan garlic mushroom/pesto combination that turns out to be a masterpiece in greasy joy. I savour it while enjoying the crude animation in Jason & The Argonauts that is being projected onto the bar wall.

Once we are well and truly stuffed we venture past a bookshelf-doorway into the venue itself. Before the entertainment’s kicked off, it is easy to see this is the ideal punk venue. It’s a small black box with a bouncy wooden floor and an array of gig posters plastered to the roof. It looks like the sort of gaff where sweat would drip from the rafters if you got the right act in here. 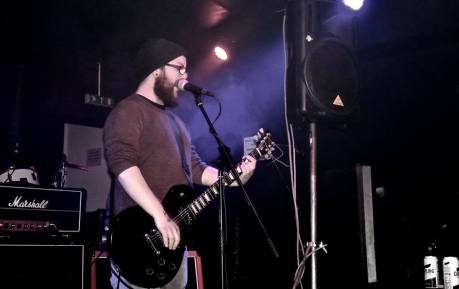 Opening the show are local Liverpool punks, ironically named The Hunx. They play straight up fast-punk with clear 90’s skate-punk influences, best illustrated in their extremely popular cover of Bad Religion’s American Jesus. It’s a very well-chosen tune that gets the crowd’s fists in the air as they sing along. Their edge is in their frequent self-deprecating jibes, slagging themselves off to a Johnny Vegas standard, which gets a great reaction from the local crowd who are clearly in on the joke. Although I enjoy a bit of droll humility at the best of times, it feels like the band are doing themselves a disservice; they might have more success if they injected some enthusiasm into their act.

Admirably, they announce at the beginning of their set that they are donating their merch sales for the evening directly to homeless people on the nearby streets. They deliver an enjoyable show, although the vocal sound quality leaves a lot to be desired – the combination of gruff and fuzz made the words a hard to decipher. Overall they’re a solid opener who kick off the evening well. 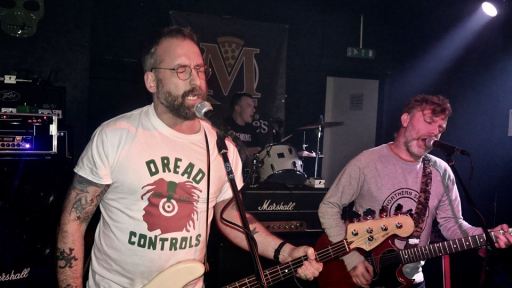 At the opposite end of the enthusiasm spectrum are Down & Outs who explode into their set with a huge blast of energy. My friend and I exchange a knowing nod of mutual approval; the international gig sign language for ‘Holy fuck, this is good’. I immediately want to throw a Descendents comparison at them, purely because they’re tight as fuck, they have a host of classic hook-laden punk rock songs and they are a tad older than your average touring band. Realistically there’s a lot more to it than that; there are notes of Leatherface, Bear Trade and 80’s hardcore influences. They’ve got a tune called Heartbreak Radio (I think?) that’s such a banger that it should be piled on mash and smothered in gravy.

Astoria‘s a similar slice of old school pop punk paradise, which they announce is off a new record that they’re releasing on Valentines Day. You know what to buy me if you fancy it, eh? The most infectious element of their sound is the dual vocals, adding a real depth to the melodies. They’ve got an intimate relationship from the crowd from word go; their banter is casual and comfortable, even getting one of the audience to hold up the guitarist’s tuner so that he can actually see it.

I feel I throw the word perfect around a bit too often, so I’ll describe Down & Outs as exceptionally well-executed melodic punk, played effortlessly and with a lot of passion. Bouncing floors and black walls only add to the understated simplicity of their performance, which has most of us poised fist-in-the-air for the whole set.

Of course, there is very little that can compete with Consumed. Although they had a long hiatus and only returned to the stage in 2015, every show I’ve seen them play since has been full of classic sing-along power, English witticisms and seriously on point musicianship (I should probably point out that I wasn’t at Podstock 2015). This set is no exception. They play many of their classic tracks, opening with Not Today and Sunnyside Up. The first proper sing-along comes in the form of Gut Buster. They’ve returned from the dead to show us how it’s done.

There’s a chap in the audience who was fortunate enough to see Consumed back in 1998, which makes me feel horribly young. Singer and guitarist, Steve, tells him that he looks just as delicious back then as he does now. Steve also sarcastically poses for photos mid-song, and introduces Wake Up With A Smile by saying, “This is for anyone with a shag piece. I’ve given up on sex, it’s boring.”

All of Consumed’s performance is slippery and chaotic with a would-be pit opening up during the introduction to Black and Blue. There are a group of women at the front who are sliding and skidding around – I believe it’s called ‘having fun’ – much to the chagrin of some of the veteran punks in attendance. The energy ramps up a notch for Twat Called Morris and transforms into complete lunacy for their cover of Ace of Spades.

Consumed live are the perfect recipe: a clever concoction of all the component parts, like the punk rock stars have aligned for this brief 30 minute window. Their forceful delivery drives hooks and dry banter directly into your frontal lobe, with grumbly masculine harmonies to fill the void. These are surely some of the best riffs ever written. They play a handful of tunes from their new EP, due for release late this year. You’ll be pleased to learn that new Consumed is virtually indistinguishable from old Consumed, apart from the fact that the words aren’t yet etched into your skull. They know they’re onto a good thing and they’re certainly not going to dilute it with age.

P.S.: Consumed don’t often play shows, but they’ll be gracing The Steamboat in Ipswich on Saturday 24th February along with Vanilla Pod, Almeida, Sombulance, Aerial Salad and plenty of others. Be there or forever regret your life choices. Event page here.

Do you think it's time? Tree from @mcrpunkfest sent me this last week and it's been playing on my mind.
Mark Bartlett from @iniit_records_uk has picked the perfect holiday reading 🌴
Happy birthday to @andy_tnsrecords - one of the people who glues of Manchester punk crew together 🎉
So good to be back at @deafinstitute after fears it was closing. Had a top time last night with Hannah and Mof from @wildernessrecs on the decks.
Recommended reading: this is a top collection of poetry. Martin is working hard at @scumbag.press to print interesting small works, always independent and always DIY. #readmorezines
Loving the new @mcrpunkfest Helping Hands tee. I bloody love @danflanagandesign designs and this has to be one of my faves.
There’s some great punk rock in stock at @wildernessrecs - particularly from @pumpkinrecordsuk and @lockjawrecordsuk.
A reminder that you should totally buy my book. It's in stock at @wildernessrecs, where you can also find me, a lot of the time.