Last month, thanks to RNR Tours, Almeida realised our longtime dream of playing a run of shows in Japan – and had the honour of sharing a stage with Belvedere, Waterweed and our cruddy buddies Darko every night.

In my experience, playing in a band – particularly a DIY punk band – means that your proud achievements don’t always translate when talking to regular folks with regular lives. Cramming into a smelly van for hours and rating the service station toilets out of ten isn’t the most jealousy-inducing boast, no matter how many different countries you’ve rocked the fuck out in.

But there’s something about touring Japan that seems to really resonate with people and help them (accurately) realise, “Wow, you’re really serious about this!”

For this and a million other reasons, going to Japan was a highly gratifying landmark experience for Almeida, and if you’re in a touring band I’d highly recommend you start networking in order to get out there as soon as you can.

If you do get around to it, there will likely be a few culture shocks and bits you’ll forget to do, so here are some top tips to help you survive.

A 15 hour flight may be daunting (and very boring if your in-flight entertainment conks out – grazi mille, AIitalia airlines!), but if you’re used to long stretches of staring at the back of someone’s head on tour, you’ll be fairly well prepared.

Make sure you pack comfy gear like PJs and a good quality neck pillow – if you travel on a budget like us you probably won’t get much decent kip on the rickety old seats. It’s not just vital that you stay comfortable for the sake of your flight, but you don’t want to be spending your whole time on the road in Japan trying to pop your neck back into place.

We took our instruments and drum breakables on as hand luggage, which was a good way to ensure they weren’t getting smashed about by the airline – but make sure you’ve established whether it’s ok to do so, as you may incur heavy charges if you haven’t cleared it with them beforehand.

RNR Tours were an awesome well-oiled unit to work with, helping us get from A to B, all the while making sure we got some time in to stroll around a 16th century castle in Nagoya, see the bright lights of Shinjuku, and frolic with feral deer in Nara. As ever, it’s important to not faff about too much in the mornings if you want enough time to see the sights.

We’d have been absolutely hopeless without our team. Unless you have a fluent Japanese speaker in your band, you’ll outright need to employ a tour manager at the very least.

The RNR team are incredibly efficient and assisted us every night with loading our gear in and out of the venues. If you get into a similarly fortunate situation, you can help them (and yourselves) by ensuring sure you label and number your bags to avoid something getting left behind. Probably good practice for any tour, to be honest.

RNR also sold our merch for us and made sure it was all set up properly at the table, so again, if you are ever blessed with this privilege, the least you can do for their sake is to ensure that your stock is as organised as possible. Your shitty system of bunging it all into one box with no order will cost you sales if they have to spend ages looking for a size you’ve run out of.

There are some seriously dedicated collectors at shows, so make sure you have as wide a range of attractive merchandise as possible.

If you’re a veggie/vegan, or just fussy – eating in Japan can be a right old ballache. There’s some tasty grub if you know where to look, but the concept of not eating animals is notoriously alien, so it’s a good idea to download the Google Translate app to help you read the ingredients before you tuck in.

Bring lots of nibbles from home, just in case you end up in a scenario where there’s nowhere to eat for hours on the road, and literally everything has meat in it. I sadly ended up buckling and eating some gnarly fishy, potatoey thing, and was pretty ill as a result, which of course isn’t what you want when you’re supposed to be onstage in two minutes.

Every show we played seemed to start and finish a lot earlier than we’re used to – but this was a nice change of pace because it meant RNR were able to take us for a nice chill out and a sit-down meal afterwards with the other bands.

Each venue had its own backline and production team, and the sound at each show was notably excellent both onstage and off. The attendance for each was also very impressive, with every crowd blowing us away with their enthusiasm and familiarity with our songs. They really went out of their way to make us feel welcome, and many even asked for photos and brought their Almeida CDs along for us to sign, which was fucking mental. 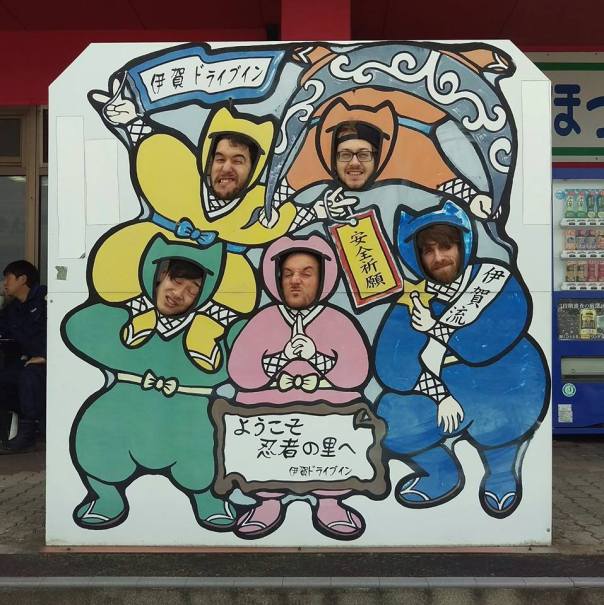 The stereotype of Japanese people being really respectful and courteous is, at least in our experience, pretty accurate. You’ll find that if you’re smoking in a public place (bar some stuffy venues and designated areas), you’ll probably be the only one doing so. Same goes for being a loud, obnoxious bell-end, which, to be fair, we’re all prone to after a few adult beverages. So yeah, reign that in if possible!

That’s not to say the locals are antisocial, though. Unlike some European countries, people seem to want to have a conversation with you even when it became clear neither of you spoke each others’ native tongues. This is super fun and wholesome, but gesticulating wildly starts to get a bit embarrassing, so here are a few essential phrases we picked up which helped us get by, onstage and off.

Massive thanks again to RNR for being total legends – we had the most amazing time and can’t wait to come back with a new album’s worth of tunes.

I hope this list is helpful – dear reader, do give me a shout if you want to chat about touring hacks or visiting Japan!