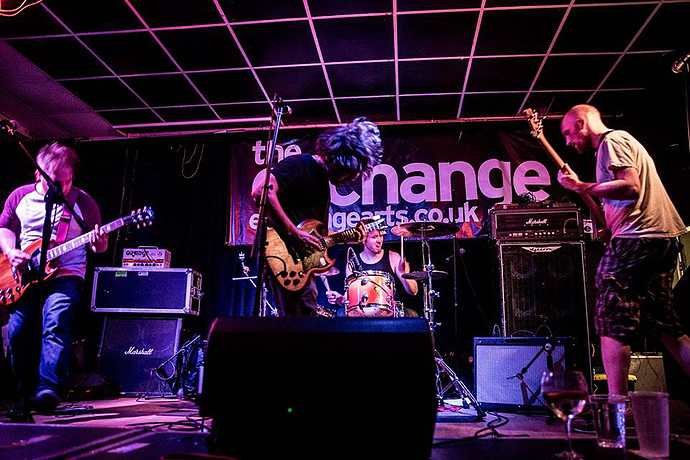 When a band says that their latest album is ‘recorded live onto 2″ tape in a converted chapel’ they instantly have my attention. Furniture for Modern Living by Sounds of Swami shows a raw and rough approach to recording that is lacking in today’s Pro Tools marketplace.

Sounds of Swami are a well known post-hardcore act who excel in mixing punk and atmospheric noise in an inventive, prog-influenced style, underpinned by lyrics that promote left-wing politics and DIY sensibilities. They’ve built up a strong reputation for exciting, aggressive live shows and they’ve captured that live intensity on Furniture for Modern Living. This follows their self-titled debut album and two EPs, all of which had had a uniquely raw production style that’s further developed on the new record.

Album opener Lull gives a lush post-rock sheen akin to ISIS and Godspeed. It draws you into a release full of dynamic shifts and a real sense of space. Guillotine takes the not-quite dissonant aspects of Lull but has solid riff work at it’s core. It is a more dynamic track that segues nicely into the next more traditionally hardcore song. Kill Me Already sounds like Fucked Up had a baby with Queens of the Stone Age and it grew up listening to Royal Blood. It is a phenomenal track, and a clear testament to the live ability of a band that have a real chemistry together.

Rome Won’t Wait hits next and again has dissonance within the verse sections that is a staple throughout the track listing. Their sound is verging into Soundgarden territory at this point and, while I appreciate the musicianship and craft of the band, I did much prefer the power produced on Kill Me Already.

A swift drum fill leads Twisting My Arm into a swung and groovy ditty that glides through at pace, clocking in at only 2:17. The progressive shifts in this song are the most diverse so far, and yet they feel like the most natural thing in the world… not an easy feat. Palava is another quick, sub three minute track that hints at a dynamically diverse style, with the lyric ‘I’ve crossed the line’ a cue to hammer down on the main riff and bludgeon the listener with fuzzy bass goodness.

Bigger Pictures brings us back to the post-rock feel from the start of this opus, and builds to a fake-out drum roll before settling in for a dissonant groove akin to Radiohead. The instrumental nature of this track and the dub-inspired outro feels like it is leading to something… that being Take Take Take. We’re hitting the hardcore territory once again, until everything suddenly gets very quiet. The drums are played at an almost whisper-like level, but then the vocal line, ‘Where I fucking choose!’ blasts us back into sonic carnage. This track is very much, “That thing the Pixies do – let’s do that but at eleven.” Awesome.

Penultimate track New Wounds has a nifty twin guitar attack, where they play off each other until coming together for the main power riff. The vocal delivery on this album has been absolutely on point, powerful and guttural but delicate when the instrumental demanded it.

The final track, Tough Love, is a six minute encapsulation of the album that preceded it. Beginning softly and featuring a direct lyrical approach, asking the subject of the song to ‘paper the cracks’. It feels really personal, even with the sonic tapestry surrounding the vocal delivery. Building to the end, it feels like the band throw everything at the wall, the pedals, the feedback, the kitchen sink, everything.

This is by far the most sonically diverse album I’ve heard in a very long time, from a band that play music that is quirky and unique, but doesn’t feel quirky and unique. The album flows naturally, capturing the honesty and raw intensity of the band’s live show, confident in their own dissonance and dynamism.

Furniture for Modern Living is available now from Drawing Board Records. Check out their Facebook or pick up a copy of the album from Bandcamp. It’s also available to stream or download from iTunes, Amazon, Deezer, Google Play and Spotify. Also, make sure you catch them live at Manchester Punk Festival.