Aerial Salad’s frontman tells how the band started and how they got banned from Fest, in the second half of a two-part special feature.

Check out Part One here.

Aerial Salad have been playing together since high school, although they’ve only really been a proper band for two years. They’ve done a lot in that time: releasing their first album, getting added to the Plasterer Records roster and playing increasingly large shows, including Florida’s infamous annual punk rock event: Fest.

Roach, released last week, is a raw, angsty record, that takes cues from bands like Jawbreaker, Greenday and Gnarwolves. Misery, mundanity and self-loathing are the most prescient themes on the album, although musically it’s very upbeat. Chatting to singer/guitarist, Jamie Munro, it’s clear that his life if underlined by a negative outlook that many of us can relate to, with his passion for music driving him forward through is shitty day job and crippling self-doubt.

Jamie and I covered a lot of ground in Part One, but early in the conversation he told me a story that deserved an article in its own right.  We got chatting about the perils of drinking wine that you’ve found open in a roadside in London. We determined pretty quickly that although Jamie’s got some punk sensibilities, he draws the line at street wine (quite rightly so).

I asked him what the most punk thing he’s ever done is, and he suddenly comes out with this corker:

“The most punk thing we’ve ever done was to play Fest, and then get banned from ever playing again.”

It turns out that this unexpected gem is also the origin story of Aerial Salad. 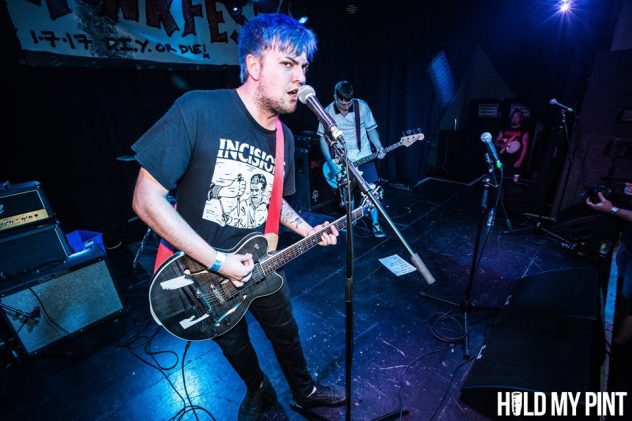 You got banned from Fest? Tell me about that!

Fest is the main reason Aerial Salad all happened. This was only two years ago; but I was a miserable piece of shit, I was well depressed.

When you’re properly depressed it makes you into a cunt: once you have no regard for your own well-being, it makes it really difficult to have regard for other people’s well-being. If your own emotions are so bleak, you don’t care about upsetting other people, so you can become a narcissistic arsehole. Not everyone does! Positive people who deal with depression are incredible, because it’s a very selfish illness, and it can turn you into a piece of shit. It took me a really long time to realise that’s what I was doing.

To cheers us up, Jack [Appleby, drummer of Aerial Salad] took us to Fest. I ended up meeting Tony [who runs Fest] out there, which was incredible. I told him, “This festival basically stopped me from killing myself,” which is true. That’s what 97 is about. I asked him how you get onto playing it and he just said he likes hearing new bands.

When I got back, I was thought about how I wasn’t really enjoying being at uni. I’m a bit of a fuck up, I’m acting like shit, I’m treating people like shit. My life’s going fucking nowhere… and that’s normally how people start punk bands!

We got the band back together, and we decided we were going to play Fest before we’d even started recording. Fest ended up being our ninth gig. It was the best week of my life… up until we played.

Here’s the thing though, right? We’re in America. I’ve got a right Liam Gallagher on me: I’m playing Fest, I’m basically famous. I was tweeting Fat Wreck Chords every day being like, “C’mon guys, when are you going to sign us?” I was a proper cunt, thinking we were the best band ever. Not only had we just about gotten okay in the last couple of months, this was only our ninth gig.

I was also bang on it – getting fucked up every night like it was nobody’s business. Jack and Mike were taking it a bit easier, but I was completely fucked every night of the festival.

On the day we were playing, it got to about half nine… and then it hit us that we were about to play Fest.

We hadn’t practiced in a week or two. And then the stars all aligned… and Jack and Mike got really, really fucked up. I got even more fucked up!

It really fucked with me because I thought it was my big chance at making no money and playing in a punk band. It turns out that actually as soon as you start a punk band you have made it, as the whole goal is to make no money and sometimes be a little bit rubbish.

I know I fucked that up. I feel that part of becoming a better person is admitting your faults in life and confronting them. If you hide away from the reason why you’re a piece of shit, you just justify it to yourself, that what you’re doing is okay.

Jamie talks a big game, full of rock-star anecdotes and Gallagher swagger, but underneath he gives the impression of a man who really hates himself. It’s an endearing combination of ego and self-loathing, something which he harnesses in his lyrics and his raw vocal delivery.

Hearing it all laid out on a complete record for the first time on their album Roach, it’s overwhelmingly relatable. He’s a shitty, flawed human being, plagued with anxiety and boredom just like the rest of us. That’s precisely why you should go and listen to the album.

What’s the future for Aerial Salad? Where do you see yourself in 10 years’ time?

Fuck me. That’s the problem with depression, you can barely see about four weeks ahead sometimes. This is what I love about the DIY scene. We are all very lonely, very sad little people and we bond over that, and a love of loud, shouty music.

What I want is for us to continue to do what we’re doing. I’d like to tour more and do longer stints. I’ve pretty much written another album. I don’t really see us anywhere. There is no goal in this band. The only goal is to make my life sort of worth living and that’s what it does. So as long as it’s worth the constant stress and heartache… We’ll be exactly where we are, with a few more people listening to us.

Check out Part One of our interview here.

While you’re here, check out our review of their new album Roach. Follow Aerial Salad on Facebook and buy a copy of Roach over at their Bandcamp page, you won’t regret it.