I manage to catch up with Aerial Salad’s Jamie Munro on a wet Tuesday evening in October, on the eve of the release of their first album, Roach. Jamie has spent the last hour or so stuck on one of Manchester’s buses, and curses the heavens for deciding to open just as he’s lit a cigarette. I wouldn’t call Jamie a tortured genius, but he’s got an uncanny knack for channelling life’s little day-to-day tragedies into something creative.

He has plenty to be excited about, though; 2017 has been a big year for Aerial Salad. The young trio from Manchester have been playing increasingly bigger shows with the likes of The Bouncing Souls and PEARS, plus big festivals like Rebellion. Roach has just been launched on Alex Brindle-Johnson’s label Plasterer Records, and they’re embarking on a full-on three week tour with Wonk Unit this week. Jamie sings and plays guitar, with Mike Wimbleton on bass and Jack Appleby on drums completing the trio.

I could chat to Jamie for hours; he’s funny, self-deprecating and bubbling with youthful exuberance. Mid-interview, he asks me, “Can you say I was ‘the voice of a generation yet to be heard’? Because then it can say that on my gravestone. It’s very arrogant.” We had so much to discuss that I’ve split this interview into two shorter parts.

Read on to learn about Aerial Salad’s touring successes and failures, plus Jamie’s take on songwriting and musical influences. In tomorrow’s instalment, we find out the origin story of Aerial Salad, how they got banned from playing Fest and why Jamie hates himself with a burning passion.

For a fairly new band, you’ve managed to get onto some big gigs like Fest and Rebellion. How have you managed that?

This band is based on two things: naiveté and luck. That’s what’s beautiful about the DIY scene: you’re only ever four gigs away from playing with one of your favourite bands. The only difference with us is that we’ve had loads of time to gig, because we allowed ourselves to get shit jobs so we can afford to play in a band all the time.

What are the biggest gigs you’ve played recently?

The biggest one we’ve done was Rebellion, but I think Wonk Fest was the best show we’ve played. The first gig we did with Beach Slang at Brudenell Social Club was fucking ridiculous. That was the first good set we ever played. That was just after Alex [Brindle Johnson, of Wonk Unit] had started managing us. He had seen how shit we were, and he told us we needed to be better. He taught us how to be good.

Didn’t you have a support slot with The Bouncing Souls that went a bit awry?

Yeah, there was a miscommunication between the promoter and the tour manager. We turned up after a five and a half hour drive to Norwich all excited for our first proper tour, ready to get stuck in and play with The Bouncing Souls. Their tour manager was like, “Who are you? There’s only three bands playing tonight and you’re not one of them.”

God bless him, Dan, who was putting on the gig, was like, “Please can you just let these children play this show?” We went on 10 minutes before doors opened and played a 20 minute set. Our friend walked in halfway through Dunhills and just thought we were sound-checking. Before you knew it, Great Cynics were on.

So, we did play with The Bouncing Souls and no one can take that away from us, even though we did play before doors opened and no one saw us. It’s alright.

You’re heading out on a nineteen-date tour with Wonk Unit next week – it’s the biggest you’ve done. How do you feel about that?

That is the granddaddy of them all! Three weeks in the Wonk Unit van; I literally can’t wait. I say all the time to people (and to Alex as well) Alex is like my hero. It’s kinda like having Ian Brown as your manager; it’s really weird trying to get over that fanboy thing. 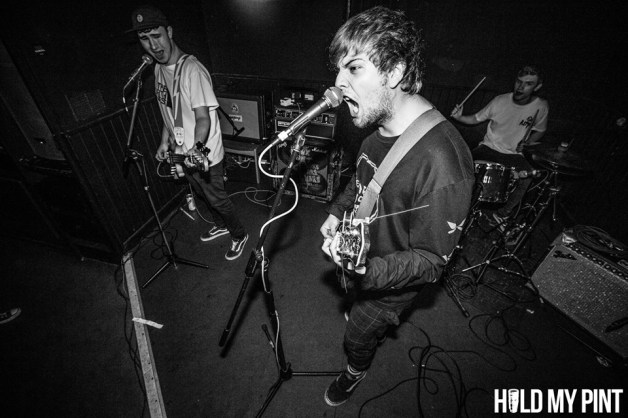 What part of the tour are you most excited about?

All of it. I’m looking forward to all the venues, all the gigs, all the bands we’ll be playing with. I’m looking forward to being with my best mates for three weeks straight – that’s the best thing. Quite often it’s the car journeys where we have the most fun. We’re not tight enough or quite good enough yet, to where we can relax and enjoy the gigs. We have to really focus, but the build up to it is always fun. I can’t wait to spend three weeks crammed in a van with my best mates.

I’d love to speak to you again after you’ve been cooped up in a van for weeks. Surely you’ll get fed up with each other?

I think those two will do! We rarely argue or fight; we all love doing it and we all love each other. That’s never forgotten, no matter how weird or bad a show we’ve done. We’ll just say, “Well, I’ll never forget that.” What else would I have been doing on a Wednesday night in November? I would have been in my job, selling gas and electricity to people badly. Or serving drinks to rich idiots in a bar.

You were telling me that you wrote Habits and Problems at work, how did that come about?

It was on a really busy Saturday shift at a cocktail bar I worked in, in Manchester. It was really going to kill me that job. I was putting bottles away in a fridge, and I was just like [grumpily], “I’m sick and tired of always working weekends…” I started humming it, and I jotted it down on my phone on a cig break.

Is the writing process usually that quick for you?

For the really good songs, yes. Most of the album has been written between the hours of 3-4am.

That’s the depression hours, that is.

Exactly! All in the depression hours. The really good ones come out straight away. If I have to sit on it and think about it, it becomes forced. Our sound is based on the fact that it’s real and about capturing how we feel in that moment.

When we first recorded Dunhills the lyrics were improvised in the studio. I only had the gist of what the song was about. I was feeling very shit, and I had just done a very horrible thing, in a horrible situation that I’m not proud of. I was hating myself.

You’ve definitely managed to get that raw self-loathing into the song. Roach has really interesting production; there’s a sense of urgency behind each of the tracks. Was that deliberate?

We recorded with Tim Gray at Big Tone Studios. He’s recorded Faintest Idea, Random Hand’s first EP, Apologies I Have None’s first EP. We hit it off with him, because he loves Green Day and he loves Jawbreaker so he got us right away. We put him through hell because we were really shit. It sounds scruffy because it was all very rushed, because we don’t have a lot of money. Everything had to be done quickly. He did an amazing job.

You’ve taken all the songs from the old Roach EP and included them on the album. Were any of them re-recorded?

No, we just re-mastered it to fit in with the new recording. We said to Alex that we didn’t want the old songs included on the new album, but Alex’s point was, “Well, no one’s fucking heard it have they?” He’s a very wise man.

It’s easy to pick up your influences on the album. Check My Mind feels like listening to Green Day’s Longview for the first time. The bass line’s like a warm hug from an old friend. There are also snippets of Gnarwolves, The Menzingers, etc. What were you listening to when you were writing it?

All of the songs have a slightly different flavour, I suppose. I find it quite frustrating when people don’t admit that their songwriting is influenced by other people. There’s a difference between ‘influenced by’ and ‘ripping off’. Sometimes it happens without you realising. For example, Success was directly influenced by Dark Days by PUP. Somebody picked up on that in Glasgow and we were like, “Fuck yeah it influenced by that – it’s a great song!”

They are sad songs because I’m a miserable piece of shit and I hate myself greatly, with a burning passion. We have a joke in the band that the root formula to all our songs is: going to kill myself, intoxicated or bored.

Sometimes when I’m thinking about a song I’ll decide I want it to have a message… and then I think, “How pretentious have I gotten?” There are songs that have meanings, but then you’re restricted to it having only that meaning. What I want is those songs that are loose, that people can put their own meaning on. “I’m sick of tired of working weekends,” is a lyric people can actually agree with. That’s what I love about music: hearing it and bringing my own meaning to it.

Join us for Part Two tomorrow, where we find out how Aerial Salad got started, and how they got banned from one of punk’s most prestigious events, Fest.

While you’re at it, check out our review of their new album Roach. Follow Aerial Salad on Facebook and buy a copy of Roach over at their Bandcamp page, you won’t regret it.

Article by Sarah Williams. Photos by Hold My Pint.