#MentallySound: tips for managing coronavirus panic and isolation, from someone’s who’s survived their own mental hell

As stricter rules have been imposed by government in an effort to curb the spread of COVID-19, my anxious friends and I have joked that ‘normies’ will suddenly know what it’s like to feel mad all the time.

Anxiety: sweats, shakes, racing thoughts, imagining impending catastrophe. Depression: solitude, sadness and worthlessness. We’re being told that if we don’t wash out hands well enough, it might kill our Nan. We’re scared to leave the house. There’s an omnipresent, invisible threat, lurking around waiting to take us out. Coronavirus panic has an awful lot in common with good ol’ run-of-the-mill depression. END_OF_DOCUMENT_TOKEN_TO_BE_REPLACED

DIY punk rock’s most mysterious band, Knife Club, reveal their identities, tell us all their secrets and launch their new video and album!

Knife Club are the most mysterious punk band of 2020 – teasing live shows and recordings without ever revealing who they really are. If you’ve missed the hype, we posted an article speculating about their identity (sorry folks: we were in on the joke the whole time).

Today you can finally learn the identity of the band! Our interview below sheds light on the whole affair. To celebrate, they’re launching pre-orders of their first full-length album We Are Knife Club – available from TNSrecords.

Watch this video right to the end, and read the interview below to find out exactly who Knife Club are and what they’re all about!

You can finally tell the world who you are! Introduce yourselves for us.

Pat from Australia’s best skate-punk exports The Decline shares his memories of gigging, in jokes, and on-the-road antics.

The Decline are a high-energy straight up skate-punk band from Perth, Australia. Unfortunately, their UK/Euro tour has been scrapped to due to whole pandemic malarkey, but we still had a chat with them about their past touring experiences.

They’ve recently released a rad album: Flash Gordon Ramsay Street on Pee Records (with international collab from Bird Attack, Disconnect Disconnect, Bells On, Cargo and Oxford Records). It fits right in the vein of Frenzal Rhomb, NoFX and Lagwagon. Questions were answered by guitarist / vocalist Pat, who first up said that they ‘love touring, drinking beers and playing legend of Zelda’.

It’s very hard to say! Maybe Punk Rock Holiday in Slovenia? Maybe South America with Much The Same and The Fullblast. Maybe Australia or Mexico with A Wilhelm Scream. It’s usually the people you’re touring with or the people you meet who make it the best, rather than the actual place… maybe the USA with MakeWar. END_OF_DOCUMENT_TOKEN_TO_BE_REPLACED

Dan Gott gives his finest advice on surviving a tour, plus an excellent insight into life on the road with Snakerattlers.

Snakerattlers are a unique duo from York, playing stripped-back garage punk with an acerbic edge. Twisting memories of sun-soaked desert dirt-rock, with echoes of blues and rockabilly, they’re a refreshing listen both live and on record. Intimidating and intriguing, uniformed and chaotic in equal measure, they’ve dubbed their style ‘rattlerock’.

We spoke to guitarist and vocalist Dan Gott about their experiences out on the open road.

Definitely each time we play with The Monofones from Switzerland. We’ve just completed our fifth tour with these guys and each time we have more fun than the last. We consider them to be family. END_OF_DOCUMENT_TOKEN_TO_BE_REPLACED

Sarah’s personal highlights from the Do It Together Fest weekend, including bananas, oranges, pastry and some punk rock somewhere along the lines. 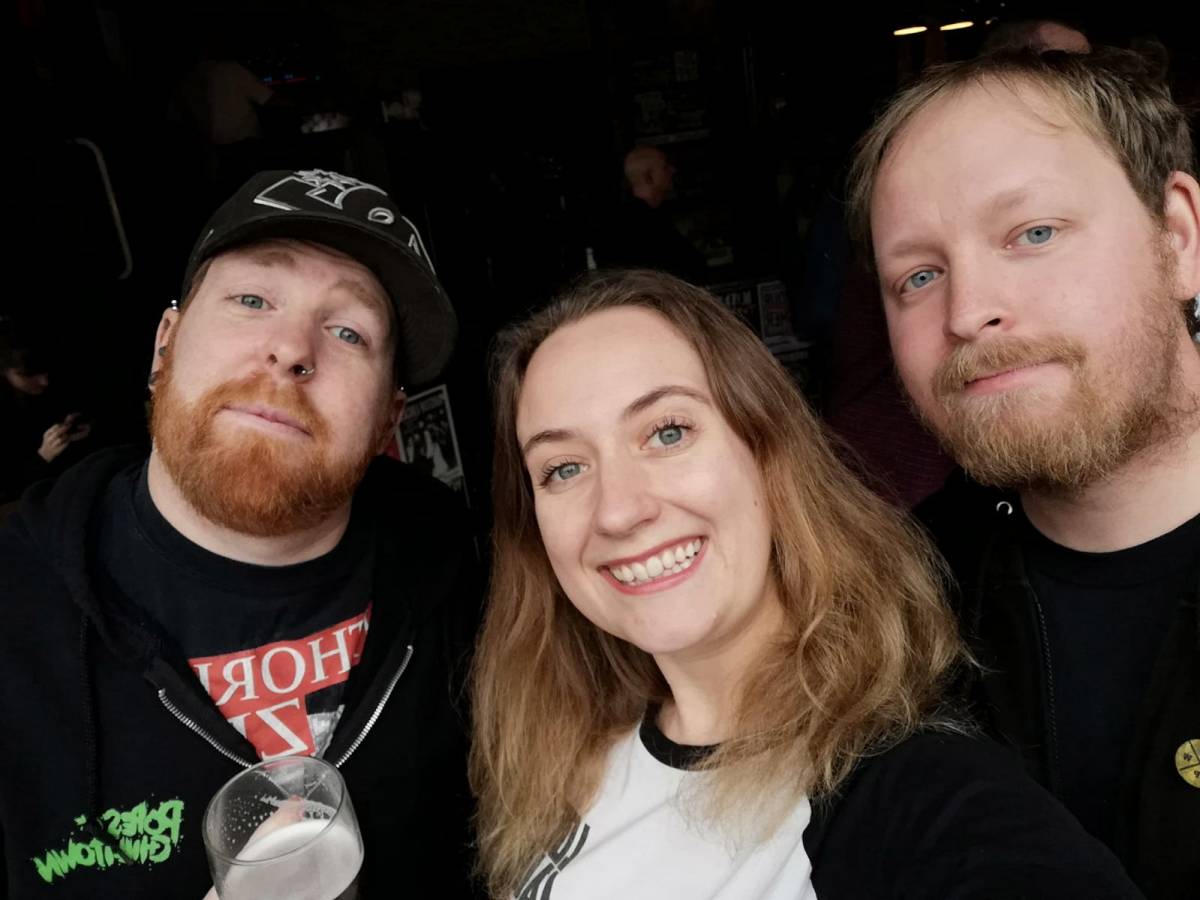 Thank you to everyone who attended Do It Together Fest. In collaboration with Paul Smith (Be Sharp Promotions) and Colin Clark (Colin’s Punk Rock World), we’d hoped to put together an event that celebrated the punk rock community, and what we achieved exceeded my expectations completed.

Firstly I’d like to announce that we raised a grand total of £880.72 for Mind! Thank you to everyone who donated, played our punk rock tombola or scoffed OGGS kindly donated cakes. Thanks also to every single person who attended, all the bands who played and everyone who lent a hand: you could truly feel the power of our community over the weekend, and every single person was a part of that. END_OF_DOCUMENT_TOKEN_TO_BE_REPLACED 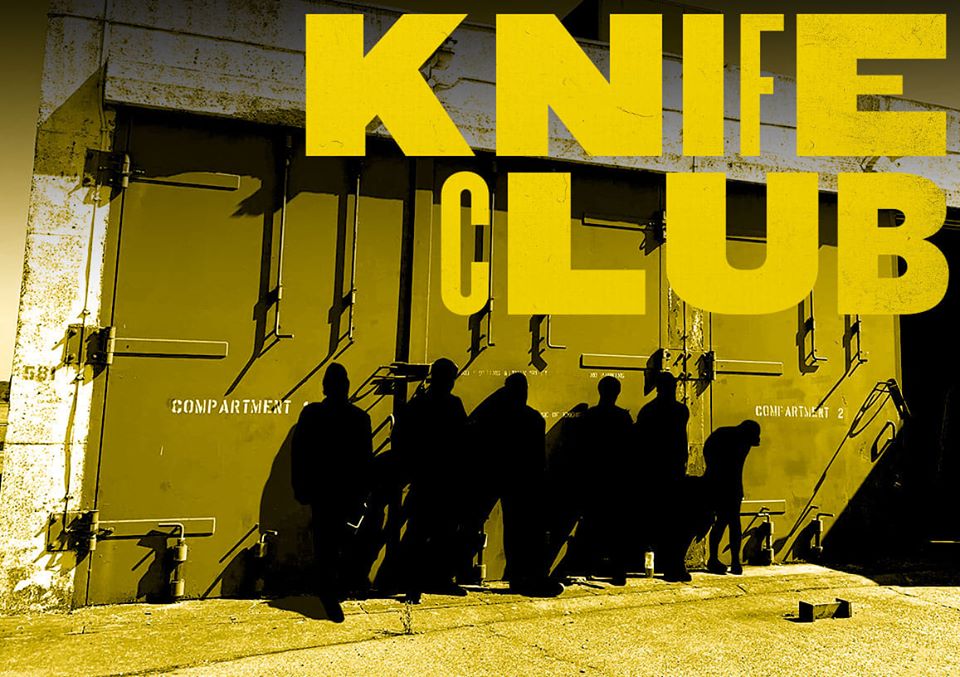 It’s likely that by now you’ll have heard of Knife Club. Their distinctive switchblade graphics and their provocative ‘#WhoAreKnifeClub?’ hashtag have been spread across social media since August 2019.

They have been announced to play enviable slots on big name festivals like Manchester Punk Fest and Rebellion, plus a smattering of club gigs, beginning with a spot high up the bill at April’s edition of Garlic Bread Club at Manchester’s Retro Bar.

How is it possible for a band to exist, get bookings, tease an album recording and create so much controversy… without anyone knowing who they are? END_OF_DOCUMENT_TOKEN_TO_BE_REPLACED

Introducing the bands playing Do It Together Fest this weekend, including music videos, fun facts and recommended reading. 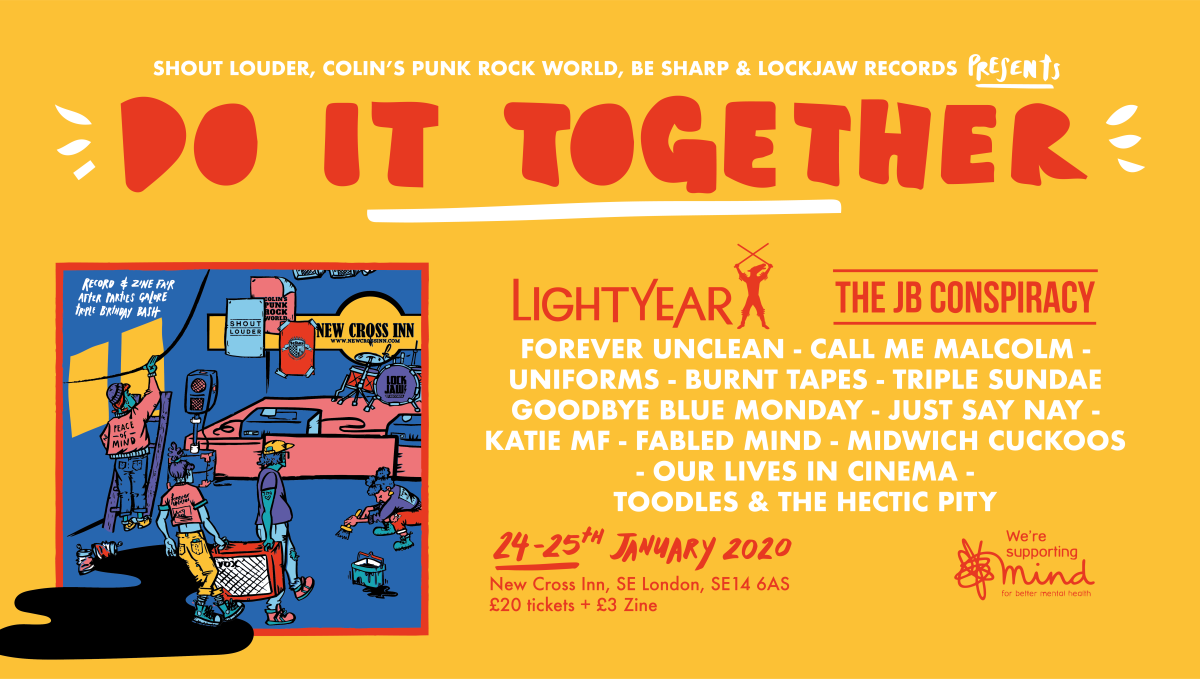 Do It Together Fest is a celebration of the DIY punk rock community, which we’re hosting alongside our friends Be Sharp Promotions and Colin’s Punk Rock World on 24-25th January 2020.

Sat in a beer garden last summer, I stumbled on the idea of putting on a London weekender (an evolution of Shout Louder Fest in 2019)… a flurry of WhatsApp messages and not a lot of thought later, we’d planned the whole thing.

Paul, Colin and I all have our birthdays over the same two weekends so, rather than competing, we’ve clubbed together to create this shindig. We’ve invited our mutual favourite bands to play, and we’re giving a platform to other promoters by offering stalls to labels and zines. I’m even making PAPERCUTS (our community themed book) to tie in with the event.

Do It Together Fest takes place on 24-25 January at New Cross Inn, London. Grab a ticket and a zine.

Our aim was to create a diverse line-up, hoping to help you to discover some bands you may not have experienced yet. Here’s a run down of all the awesome artists we’ve got playing. END_OF_DOCUMENT_TOKEN_TO_BE_REPLACED