Part 3: Claire and Craig get hitched at Punk Rock Bowling Festival in Las Vegas, then celebrate with some amazing bands! 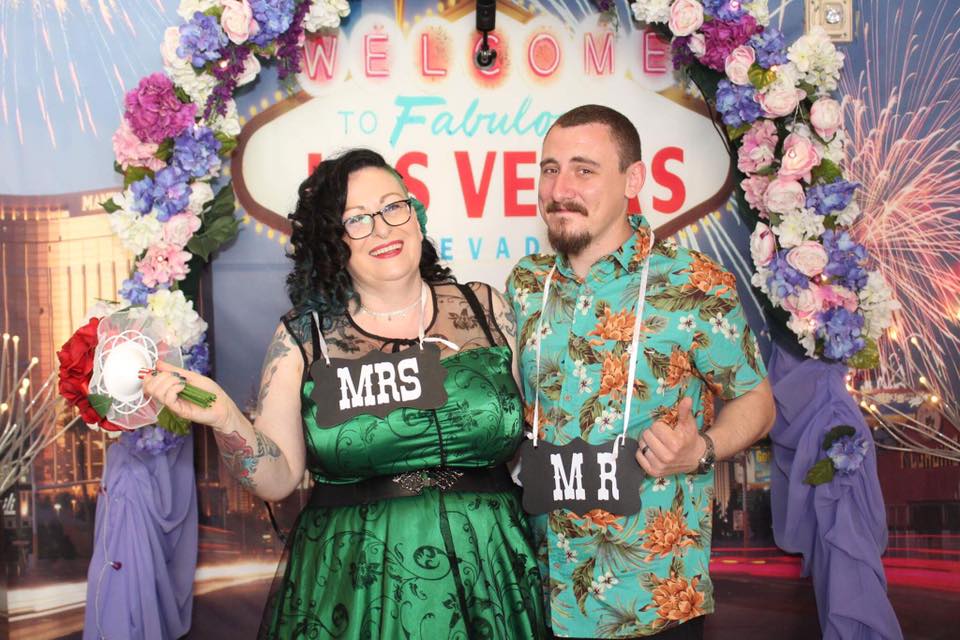 Welcome to Part Three of our Punk Rock Weddings Weekender! In our final instalment, we talk to Claire Core and Craig McGarry, who got hitched at Punk Rock Bowling in Las Vegas. They’re huge punk enthusiasts and regulars at many of the big gigs around the country. Although they live only a few miles from Shout Louder HQ in Suffolk, I run into them more often at events like MPF, Wonkfest and Rebellion.

Craig’s originally from Rochdale, whereas Claire’s born and bred in Suffolk. They are one of the most heartwarmingly lovely couples you could possibly imagine; whenever I see then they’re utterly enamoured with one another. The story of how they got together is beautiful and, after meeting at a punk festival, it seems only fitting that they should get married at one too.

Firstly, tell me a bit about yourselves. How did you first get into punk?

You guys have had a fairly speedy advance through this love stuff. That’s no bad thing! Talk us through how you met.

END_OF_DOCUMENT_TOKEN_TO_BE_REPLACED

Part 2: Kaz & Big Hands celebrate with two massive gigs and plenty of help from their friends. 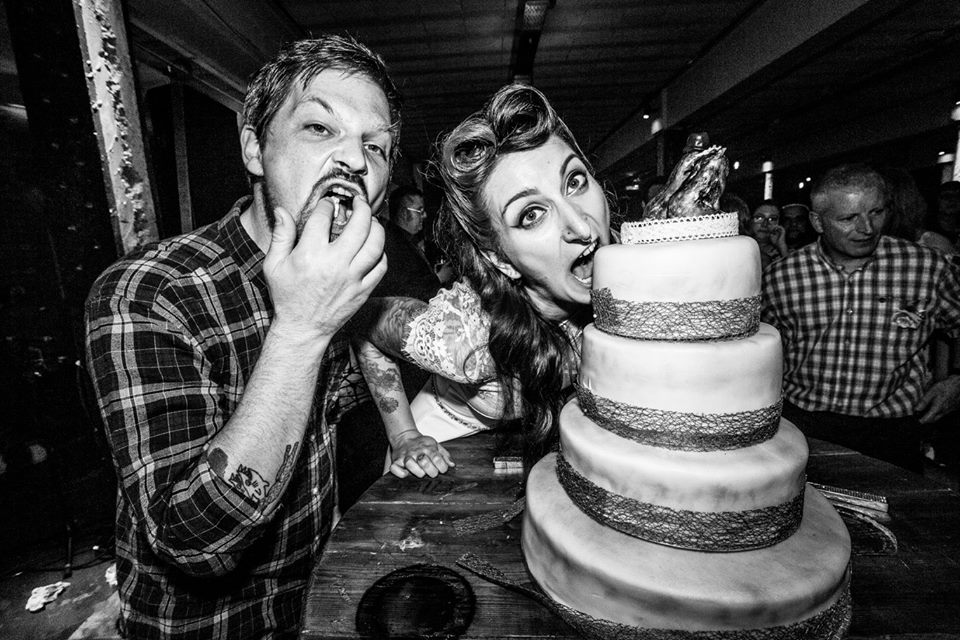 Feature by Sarah Williams. Photos by Bev/Hold My Pint Photography.

Welcome to Part Two of our Punk Rock Weddings Weekender!

Earlier this year, Kaz and Big Hands hosted two of the biggest punk rock marriage celebrations I’ve ever heard of. Not only did they have a four-band line-up on their big day, they also managed to squeeze in an impressive ‘Hag Do’ gig at Gullivers in Manchester.

Chris Hinsley, better known as Big Hands, does data analysis by day but is the drummer in Revenge of the Psychotronic Man by night. Karen Hinsley (née Warburton, better known as Kaz) loves her job as an Animal Nursing Assistant, where (if her Facebook feed is anything to go by) she gets to care for incredibly cute puppies and kittens for a living. Together, Kaz and Big Hands are an integral part of the TNS Records family, spending their spare time packing merch and helping with new releases, as well as going to gigs and generally getting involved. They have also taken on the admirable task of running all the merch for Manchester Punk Festival.

I wanted to find out whether their experience of DIY gigs influenced their marriage choices, how two noisy punk gigs translate to a successful wedding, and whether Kaz managed to crowd-surf in a wedding dress.

How did you both meet? 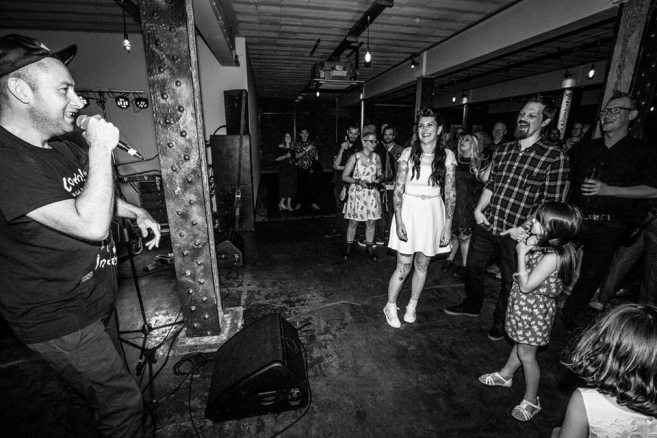 Before we get onto the wedding in detail, tell me all about the hen / stag do.

END_OF_DOCUMENT_TOKEN_TO_BE_REPLACED

Part 1 of our Wedding Special: Felicia tells us what it’s like to perform at your own wedding and how a DIY approach can make a difference. 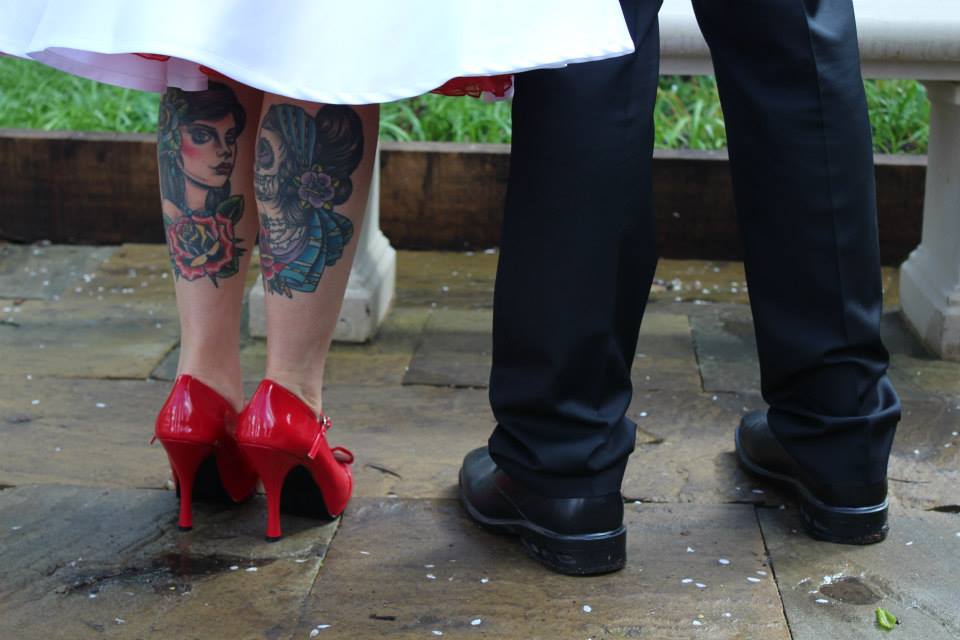 Marriage is something that has never, ever appealed to me. In my view, weddings are an expensive social construct and the idea of religious nuptials is antiquated and reductive. You have to wear uncomfortable clothes, wait to pose for awkward photos and narrowly avoid drunkenly embarrassing yourself in front of someone’s new in-laws. The only upside is the occasional utterance of the magic words: open bar.

Or so I thought. In the last year I’ve heard of some brilliant wedding celebrations that have made me jealous, to say the least. Seeing some of my punk friends tie the knot is enough to make me re-evaluate the whole institution of marriage. Maybe it isn’t a complete farce after all?

I suppose organising a wedding is a lot like booking a gig: you’ve still got bands, beers and a heap of drunk mates to consider. Far from the notoriously shite cover bands and mobile discos that infest traditional weddings, we spoke to three very different couples who introduced their love of punk into their special days in an inspiring way.

Over these three articles, you’ll hear what it’s like to play a gig at your own reception, to have your first dance to Wonk Unit live, and to say “I do” just before watching Bad Religion headline.

First up are Will Spicer and Felicia Dahmen. Spicer’s known for having previously played in Luvdump, although he’s recently joined a new band, Cheap Heat. Felicia plays violin with Danny & The Moonlighters and the pair are on their way to forming their own hardcore band with some mates in Bury St Edmunds. Spicer’s a born and bred East Anglian, but Felicia’s all the way from Melbourne, Australia.

What made their wedding different was their DIY approach, and the fact that Felicia’s own band played at the reception. Spicer even had to leave his own wedding for half an hour to go and seek out an amplifier. I spoke to Felicia to find out a bit more. END_OF_DOCUMENT_TOKEN_TO_BE_REPLACED