Moving North have sourced an exceptional punk rock line-up for a cold Wednesday in the Rainy City. Tonight’s bill of Spanish Love Songs, Pkew Pkew Pkew and Goodbye Blue Monday showcases the future of melodic punk rock: each of these bands is set to explode in the near future. This is a tour that will go down in the history books.

Selling out weeks in advance, tonight’s also due to be a shoulder-to-shoulder riot in Manchester’s tasteful Soup Kitchen basement. Exposed brick, classy beers and healthy grub here make it one of the best venues the city has to offer. It’s gigs like this that put Manchester at the forefront of the UK’s live music scene. 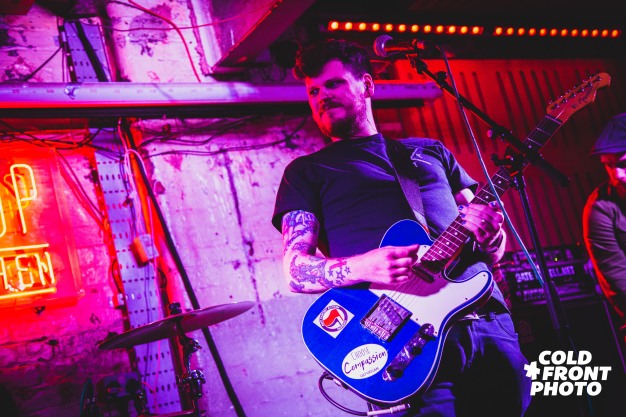 Scottish misery-punks Goodbye Blue Monday open the show early to a sparse but friendly crowd. They open with newer tune Red Skies that eases people in gently with a slow crescendo intro, before they plaster grins on our faces for one of their biggest old tunes: The Sickness, The Shame. END_OF_DOCUMENT_TOKEN_TO_BE_REPLACED

Sarah speaks to organiser Andy Davies about MPF’s dedication to the DIY approach, five years on from the festival’s humble beginnings.

Manchester Punk Festival has grown significantly since its beginning five years ago. As one of the biggest punk festivals the UK has to offer, it remains fervently independent, affordable and free from corporate sponsorship.

Now that MPF is booking massive international headliners, increasing its capacity with new venues and still selling out of tickets (in 2018, there’s a handful left for 2019); it’s easy to forget the DIY roots of the festival… but the organisers definitely haven’t.

The festival is coordinated by a collective composed of three distinct Manchester promoters: TNSrecords, Anarchistic Undertones and Moving North. Outside of MPF, AU and Moving North are still putting on small DIY shows at least once a month, while TNSrecords are working hard championing and releasing records from up-and-coming punk rock bands. All three groups work to promote independent music, tirelessly and with no expectation of financial gain, and they apply the same mentality to Manchester Punk Festival.

Things all kicked off in 2013 with TNSrecords’ 10 Year Anniversary all-dayer; the biggest event they’d run by themselves. They’d had a stage at Strummercamp for a number of years, which contributed to their desire to run a bigger festival. In the year before, they’d seen a gap for a collaboration in the Manchester scene, which led to them calling a meeting of like-minded promoters.

END_OF_DOCUMENT_TOKEN_TO_BE_REPLACED

Follow our playlist to discover up-and-coming punk bands who are playing near Manchester.

Although we’re often on the road for gigs, Shout Louder’s proud to have its HQ in Manchester, UK. It’s a city with a vibrant music culture that embraces the DIY ethic at the core of our community, with an abundance of punk shows to choose from every single week.

On the fence about going to a show? Not sure whether you’ll like the support acts? Want to know about all the latest gigs? We’ve made this playlist to help you with that, and we’ll be updating it with new gigs as they’re announced.

Follow the playlist to keep up to date with the bands we’re most excited to see in Manchester in the next two months, in approximately chronological order (first on the list are bands playing this weekend). Anything we haven’t added? Let us know.

P.S.: We’ve included a few shows that are a short train ride out of town; fuck the borders.

Special credit to Anarchistic Undertones, Moving North, Horn & Hoof, Under The Bridge, Evil Music and The Old Town House for consistently booking excellent shows. You’ve got to appreciate people working tirelessly behind the scenes to bring music right to your doorstep, without them this scene would be nothing.

MPF 2018 was a special weekend for reasons beyond just the music. Sarah’s rounded up her personal highlights from the festival.

Now widely known as Manchester Pals Fest, MPF 2018 has been even more of a blinder than previous years. I guess we knew that it would be from the moment the line-up was first announced, with Propagandhi topping it. In a landslide of Facebook posts, messages and hugs once the weekend was over, the word out there is that it’s the best festival in the UK. The three-day weekender in the Rainy City is drawing like-minded punk rock fans from all around the world.

The festival is special both as a personal and a collective experience. If you attended, you would have been amazed by the number of familiar faces in crowd. I barely had time to chat to someone properly before running into the next person. With that many dedicated, creative and intelligent people surrounding you, it’s easy to see that the UK scene is thriving at the moment. Although it felt like we were all sharing this one great, special experience, as the weekend is split between five venues around town, it’s possible that you could have had a completely different experience to a friend who also attended.

With that in mind, these are my personal Top 10 experiences of the weekend. What were yours?

“This is about how punk has taught us all our ethics; this is for all of you,” Dan Allen says between songs, instantly capturing the spirit of the festival. While most of my friends were queueing to get into Random Hand and getting turned away, I opted to catch Ducking Punches at Rebellion on Thursday night and I really don’t regret it.

Earlier in the day, Danny from Fair Do’s had said, “Look around you. This is what a beautiful, intelligent and ethical punk community looks like.” Both are examples of how appreciative the bands are of the event they’re attending. Far from being a big fest where you turn up, play and fuck off, Ducking Punches were around for the whole weekend, partying and enjoying the music like the rest of us. I had a transcendent moment during somewhere between Sobriety and Big Brown Pills from Lynn where I remembered that all my friends in the world are in this city with me, enjoying an incredible time. There is an overwhelming sense of community that I’ve not felt elsewhere – partly from the punk scene and partly from Manchester, a city with a strong sense of identity.

Closing on Smoking Spot was the perfect move from Ducking Punches, who’ve really grown with their new album Alamort. “This is a song about having the best time with your best friends,” Dan says. Perfect.

Watching my friends’ bands playing to sold out rooms

For many bands it’s their first time at the festival (and their first time in Manchester), but every act played to a huge crowd. Through general gigging and through this website I’ve become friends with some of my favourite bands, so I’m absolutely bubbling with pride when I see them getting an enthusiastic reaction from a big audience.

On Thursday, No Matter opened the festival to an almost full room at Rebellion. Following them were Captain Trips, a skate-punk group from the South Coast that I have a massive soft-spot for. I’ve been trying to get as many people to hear about them as possible, so to see Rebellion full for their set was incredible. Not only was the venue rammed – the crowd were dancing, moshing and generally enthusiastic about seeing them. It made my heart melt a little bit. END_OF_DOCUMENT_TOKEN_TO_BE_REPLACED

Teenage Bottlerocket’s Ray Carlisle and acoustic genius Sam Russo treat us to an intimate evening with help from Arms & Hearts and Fraser Murderburger.

Fraser kicks things off, commenting that he’s pleased to be correclty referred to on the poster as MacDaddy Mudderbang. This sets the tone for an evening of in-jokes, as all the acts really engage with the intimate audience. He opens with Born For This which, like many of his songs, is catchy, energetic and self-deprecating. His vocal has a gritty, edgy tone which works well as part of an acoustic show, although we’re more familiar with him belting it out live with The Murderburgers. It also sounds great on his poppy cover of Descendents’ Hope.

Halfway through the set he seems to shed some nerves. He actually declares that he ‘thinks he’s enjoying himself,’ before going on to play Another Way Out Of Here – a tune about ‘trying to find a way out without tying a noose and kicking a chair’. He also plays Wank, Florida, Wank, the gloriously named new single from his other band Fuck (It’s Pronounced Shit). He shouts out audience members (well, mainly just Mikey Wong) and chats to Ray, who’s sitting at the back of the room. It makes for a very intimate and friendly show. Everything about his set makes me happy and I’m grinning with laughter by the end of it.

Up next is Arms & Hearts, which is the moniker of solo singer-songwriter Steve Millar. He opens with a tune called Sore Sight For Sorry Eyes, a good example of the clever, emotive turns of phrase that he often uses in his lyrics. He seems to write with traditional tattoos in mind; if Arms & Hearts gains more popularity, soon everyone will be walking around with his words inked in banners around roses and skulls. Every word comes across crystal clear because Steve has a good, practised microphone technique, allowing you to fully appreciate the rich range in his voice. END_OF_DOCUMENT_TOKEN_TO_BE_REPLACED