Introducing the bands playing Do It Together Fest this weekend, including music videos, fun facts and recommended reading.

Do It Together Fest is a celebration of the DIY punk rock community, which we’re hosting alongside our friends Be Sharp Promotions and Colin’s Punk Rock World on 24-25th January 2020.

Sat in a beer garden last summer, I stumbled on the idea of putting on a London weekender (an evolution of Shout Louder Fest in 2019)… a flurry of WhatsApp messages and not a lot of thought later, we’d planned the whole thing.

Paul, Colin and I all have our birthdays over the same two weekends so, rather than competing, we’ve clubbed together to create this shindig. We’ve invited our mutual favourite bands to play, and we’re giving a platform to other promoters by offering stalls to labels and zines. I’m even making PAPERCUTS (our community themed book) to tie in with the event.

Do It Together Fest takes place on 24-25 January at New Cross Inn, London. Grab a ticket and a zine.

Our aim was to create a diverse line-up, hoping to help you to discover some bands you may not have experienced yet. Here’s a run down of all the awesome artists we’ve got playing. END_OF_DOCUMENT_TOKEN_TO_BE_REPLACED

Day tickets are now available for our London music fest, with Lightyear and The JB Conspiracy headlining.

We’ve just announced the day splits for Do It Together Fest 2020, the party we’re hosting at New Cross Inn alongside Be Sharp Promotions and Colin’s Punk Rock World.

The event’s taking place on 24-25 January 2020 and is a celebration of the punk rock community, with a record and zine fair. We’re even got some live music after parties yet to announce!

The latest episode of the Shout Louder Podcast features a conversation with Andrew Summers: Eat Defeat frontman and tour manager extraordinaire. Fresh from The Fest we talk about touring the USA, getting hounded by cops and surviving on caffeine.

On our latest episode of the Shout Louder Punk Podcast we have a great chat with Andrew Summers! You may remember him from such bands as Eat Defeat, Kickback UK and The Fractions… as well as his career as a well-respected, Pokemon-obsessed tour manager.

We get cosy in his living room in Leeds to talk touring, caffeine and all things ska. Fresh off a USA tour with Eat Defeat, he’s got plenty of tales to tell. We reminisce about the noughties UK punk scene, harmless run ins with the police and trips to our favourite tour venues.

Eat Defeat have just released a new single Wake Up, which you can hear on the podcast, along with their earlier song Can’t Say I’ll Miss You. Listen on Soundcloud, Apple, Google, or wherever you get your podcasts.

Eat Defeat will be playing Do It Together Fest, which Shout Louder is putting on with Be Sharp Promotions and Colin’s Punk Rock World on 24-25th January 2020. Grab a ticket here. 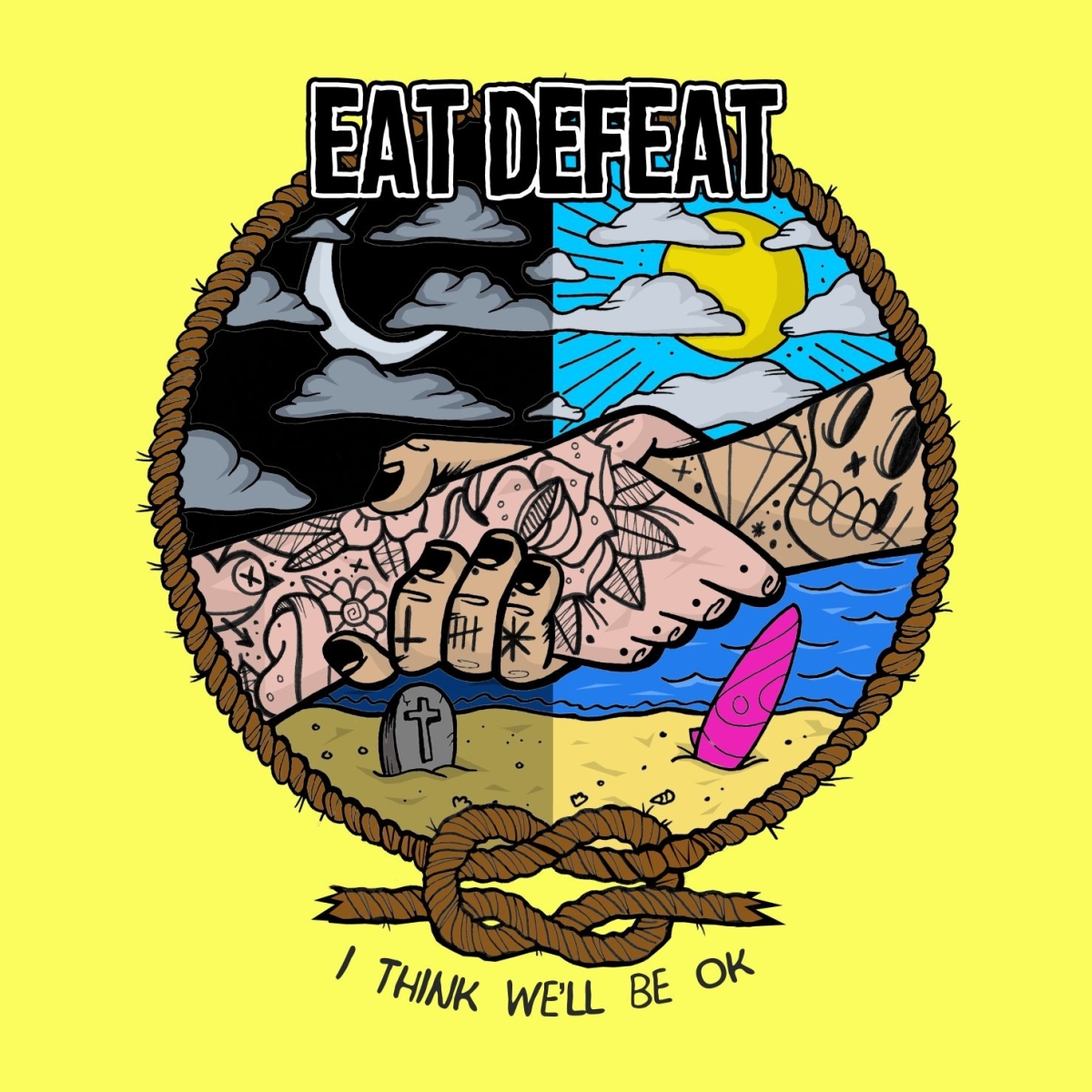 Leed’s based pop punks Eat Defeat were already arguably the UK’s greatest unsung pop-punks, and I mean pop-punk in the classic Drive Thru record’s/Warped Tour sense rather than the diluted squash of the countless Neck Deep-alike easycore contenders. Their last EP Time And Tide, which was released through Umlaut Records, was a shining example of modern UK pop-punk. Their 2nd full album I Think We’ll Be Ok, expands on the promise of Time And Tide in terms of song composition (and recycles one song and a Japanese release exclusive track from it) and adds superior lyrics and a strong uniting album theme.

I Think We’ll Be Ok is their first release for Bearded Punk records and features some pretty gorgeous, colourful artwork that nicely sets the tone for an album that tackles tried and true topics such as depression, anxiety and the complexities of relationships, but all wrapped in a sugary exterior and an ultimately optimistic place.

First track A Little Less Than Ok sets a high bar immediately with an utter sharknado of melody attacking you from every direction. Lovely guitar textures abound and there’s enjoyable harmony and rich, crunchy and full production here in spades. ‘I can’t break out of this mental state’ sets up the lyrical conflict of the album pretty perfectly.

Second track Duvet Day, is as concise a statement as can be at 41 seconds but no less affecting; the lyrical sentiment, “You’ll take this duvet away from me when you pry it away from my cold, dead hands,” is one a lot of us can easily relate to. END_OF_DOCUMENT_TOKEN_TO_BE_REPLACED

Tune into the next instalment of the Shout Louder punk podcast! Tunes from Eat Defeat, SKIV, Wolfrik and Hummer.

Podcast #8 sees the return of everyone’s favourite: Mark Bell! This episode is all excitable Mark and Sarah music banter – we cover a huge range of topics, including all the gigs and punk rock antics we’ve experienced lately. We’ve play tunes from Eat Defeat, Wolfrik, SKIV and Hummer.

Mark gives us the gossip on Hell Hath No Fury Fest, with Bolshy, Natterers and Brassick. Sarah chats about gigs she’s been to in Manchester, including Tim Loud, Custody, Holiday, Bear Trap and Incisions. END_OF_DOCUMENT_TOKEN_TO_BE_REPLACED

Mark and Sarah discuss all things MPF 2018 including insider tips and line-up clashes, plus we announce the Wotsit Called Fest headliner!

We are so excited to share Podcast #4 with you! This is our favourite one so far; we just hope you love it as much as we do. You can listen on iTunes, Soundcloud and many other podcatchers, or on the link below.

Recorded in the extremely silly, hungover aftermath of Dugstock Festival Mark and Sarah discuss all things Manchester Punk Festival in detail. We pick through the whole line-up, talk about the festival’s history and give you insider tips on surviving the weekend. Even if you’re not attending the festival, it’s worth a listen to hear some fantastic punk tunes and to laugh at how tired we are.

Stay tuned till the end as we will also be proudly announcing the Friday night headliner of Wotsit Called Festival. Wotsit Called was one of our top festivals of 2017 and it’s growing even bigger this year. It takes place on the last weekend of September at The Palace in Hastings – you can book tickets here. We can’t wait to tell you who they’ve booked!

The podcast is available on iTunes (here) and all other good podcatchers, or you can listen to it right now:

These are the songs we play:

END_OF_DOCUMENT_TOKEN_TO_BE_REPLACED

Now in its third year, Might As Well Fest is socially-responsible all dayer split across two tiny London venues: The Macbeth in Hoxton and the infamous Old Blue Last in Shoreditch. If the cracking line-up isn’t enough to coax people down, the promoters are also using the forces of music for good, raising money for two worthy causes: CALM and SANDS.

When I hurriedly stumble into The Macbeth at 3.20pm, I’m concerned that I’m late but turns out that I needn’t have worried: they’ve had some troubles of their own. Don Blake and Sweet Little Machine have pulled out last minute, and You Know The Drill’s van has broken down outside Birmingham. As a result, they’ve had to shift timings, drum kits, amps and expectations. The change in the set times is actually a positive: the opening bands will now have a bigger crowd and the heel-draggers like me, who couldn’t make it earlier, won’t be missing out. Nonetheless, I’m reminded that we ought to be extremely thankful to anyone with the resilience to put on DIY shows!

A handful of early-birds assemble to watch Thirteen, a Scottish group who’ve joined the bill at the last minute. They play old school punk with a rock ‘n’ roll flavour, which is good, but slightly out-of-sorts with the rest of the line-up, which is a combination of fast-punk and pop-punk. It’s good pub-punk and not a bad way to kick things off for the day.

As I reviewed their EP recently, I have been very excited to catch Our Lives In Cinema live. This is only their 8th gig and their freshness shows: they look a little awkward on stage at the beginning of the set, settling in after two songs.

They open with Cut and Run – an awesome throwback to a lot of energetic early noughties punk. You can hear a strong Jeff Rosenstock influence in Mark Bartlett’s frantic, emotional singing which is conveyed better live. Bartlett has a unique style of performance: he packs as many words into a bar as possible while shaking around the stage. Currently it looks a little awkward, but with more practice I expect it to become an integral part of their act. Otherwise, they’ve got a good, solid rhythm section, strong drumming and great backing vocals. They close on their most anthemic song, I Got This, leaving the audience happy. Once they’ve got a few more shows under their belt, I look forward to seeing a much more confident and comfortable band.

Lay It On The Line are up next at The Macbeth. They’re the most hardcore band of the day. It’s a brutal and disordered performance, with frontman Mike spending much of show writhing, crouched or lying on the stage while screaming bloody murder. He gives the impression of a man on the edge of breakdown extremely well. It’s all held together with some warmer guitar backing, adding a more melodic edge to their otherwise extreme sound.

It’s unusual to see bands with two standalone singers (Casual Nausea’s the only one I can think of), but it really works. Mike and Alice and equally adept at screaming and conveying a lot of anger and emotion. It’s hard to make out the lyrics but their explanations of the songs are both surprising and entertaining – one song’s dedicated to fans of the Marquis de Sade (of which they assume there are none in the room), another is about a head teacher who was killed by a rent boy after he failed to pay up…  It’s fascinating to know what inspires people’s song writing sometimes. They pull out a fantastic cover of Rotting Out’s Positive Views and end the set in a wail of feedback.

Recap are up next, and they are fantastic. That’s the least you can expect from Dave House and Mark Pavey’s latest project – a reincarnation of Pacer and follow-up to The Steal. They jokingly say it’s only their second show, but they’re anything but new to the game. END_OF_DOCUMENT_TOKEN_TO_BE_REPLACED