On this week’s podcast I got really damn angry about the UK government, coronavirus, sexism and racism, and I argued with trolls on the internet. I thought: where better to let out that rage than on a public music forum, where will respond and/or care?

I enjoyed the new radio podcast format massively for Round #1, so I thought I’d try it again. I’ve played some bangers and done my best to give you some solo banter – I’ve talked a lot more on this episode and I will not be the slightest bit offended if you skip ahead to the juicy punk rock tunes.

END_OF_DOCUMENT_TOKEN_TO_BE_REPLACED

We enjoyed the return of one of Belgium’s biggest punk rock festivals, featuring Not On Tour, A Wilhelm Scream, Millencolin, Snuff, Jawbreaker and more.

Years ago, Groezrock was as much a draw for British punk rockers as Download or Reading. For many of us it was our first festival outside of the UK. After a fallow year, Groezrock has evolved and become more refined, but it still boasts an exceptional line-up and an excellent atmosphere.

I travelled over to the sprawling festival site in sleepy Meerhout in the company of Goodbye Blue Monday, who were playing the smaller Cockpit stage on Saturday. We were keen to get a Jupiler down our necks as soon as we arrived, which fortunately coincided with Pkew Pkew Pkew getting things started. END_OF_DOCUMENT_TOKEN_TO_BE_REPLACED

As DIY giants Manchester Punk Festival have just announced the first installment of their 2019 line-up, we thought it was time for Ian ‘Tree’ Robinson to join us on the podcast.

Tree’s a staple of the Northern punk scene, known for booking regular gigs through the Anarchistic Undertones collective and tours via AU Tour Booking. He’s got years of experience in DIY bookings, plus a Northern attitude that makes him quite an entertaining guest.

We discuss Manchester Punk Festival’s changes, what he’s learned from 10 years of booking punk shows and some of our current favourite bands and labels. We also talk about Propagandhi. A lot.

P.S. The star of tonight’s show is our cover model, Bernie, who you can follow on Instagram @dci_burnside.

END_OF_DOCUMENT_TOKEN_TO_BE_REPLACED

The latest Shout Louder podcast features none other than Nuno Pereira and Trevor Reilly from melodic hardcore legends A Wilhelm Scream!

Sarah caught up with the vocalist and guitarist at KNRD Fest, in the beautiful Bavarian woods. We shared a drink and talked a bit about the magic of the music festival, the charm of sweaty club shows and some of the staggering things that have happened to the band on tour over the years.

Hailing from New Bedford, Massechusets, A Wilhelm Scream are one of the most influential bands in modern melodic hardcore punk. Since 1999 they’ve been turning out high-octane, aggressive punk anthems, releasing some of the best albums of the last 20 years, proppelled by unrivalled live shows. We’re glad we were able to catch them and we hope you enjoy listening to the episode as much as we enjoyed recording it.

Apologies in advance for the phone noise in the second segment – if it’s really bugging you then skip on past it to part three.

If you’re interested in reading more, start with Sarah’s personal account of following AWS’ UK tour with Darko, then Sarah’s 13 Best Memories From KNRD Fest. We also interviewed AWS drummer Nick Angelini back in May.

We also play a sterling selection of fast-punk tunes:

Enjoy Sarah’s personal account of a magical weekend over-indulgence in the Bavarian woods. Feauring After The Fall, A Wilhelm Scream, The Human Project, Petrol Girls, Forever Unclean, Money Left To Burn and The Affect Heuristic…

For years, people have been telling me that KNRD Fest is special. I finally bit the bullet this year and made it out to Nuremberg for the two day party in the famed Bavarian woods and… it turns out they’re right. KNRD is something truly special.

KNRD (pronounced ‘conrad’) is a magical, musical fantasy for anyone in the European skate-punk scene; so great that I wonder whether I dreamt elements of it. With bands like After The Fall and A Wilhelm Scream gracing a sterling skate-punk oriented bill, you know it’s going to be a great weekend, but what makes KNRD exceptional is the unique private-party feeling it has. 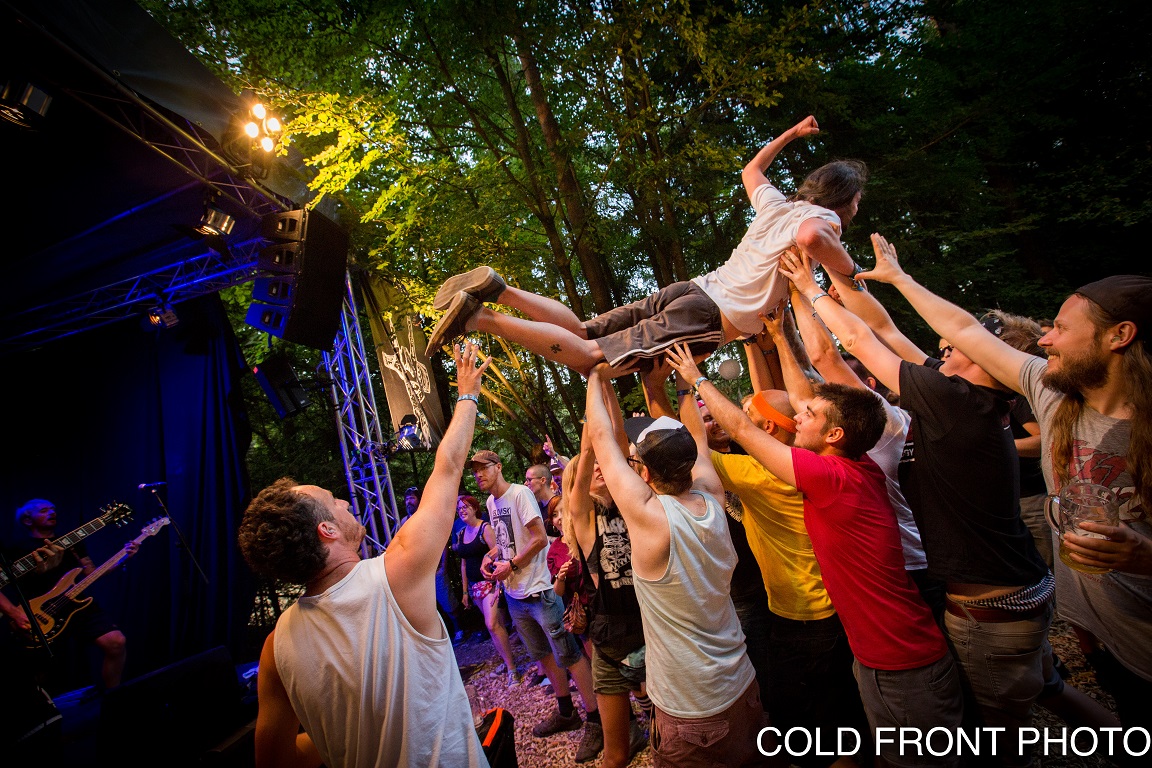 I arrived quite late on the Friday, just as the bands were beginning, and just in time for to see Darko’s Karl Sursham wielding the mic and welcoming everyone to this wood-chipped glade with a charming boom. A keg is ceremonially cracked open and, thenceforth, it’s feels almost rude not to imbibe as much crystal-clear, chemical-free Bavarian beer as possible.

It’s this, in combination with the generously free-poured gin and tonics, moscow mules and pfeffe (peppermint) shots, that bring me to the theme of today’s article. As people regrouped on Saturday morning, after Friday night’s excesses, the question on everyone’s lips was: “How much do you remember of last night?” END_OF_DOCUMENT_TOKEN_TO_BE_REPLACED

Sarah spent a long weekend following melodic hardcore legends, A Wilhelm Scream, on their UK tour with Darko. This is her personal account of the sweatiest weekend of the year.

It’s sweltering. I’m screaming. There’s a crush of bodies all around me, elbows and fists and softer parts, heaving and desperately scrabbling for space. Every surface is slick with sweat. I turn around just in time to catch a boot to the face, as singer Nuno Pereira is hoisted above the pit, trailing the mic cable, still belting the lyrics out.

He circles above the crowd before being gently propped back onto the the stage, where he immediately bounces back to scream out the chorus. I’m crushed against the edge of the stage and, when I look up, he’s literally dripping a waterfall of sweat straight on to all of us in the front row.

It’s the longest, hottest day of the year, and the air feels ripe with anticipation for the chaos that A Wilhelm Scream bring on tour with them, unleashing raw, unbridled energy on stage every single night. This 5-piece melodic hardcore whirlwind have journeyed from their hometown in New Bedford, Massachusetts for a month-long tour, beginning with 7 dates in the UK with Shout Louder faves Darko.

I’ve been known to go to absurd lengths for the love of punk rock and this weekend will be no exception. Taking every chance to see one of the world’s most incendiary live bands, I decided to catch them in Manchester, Norwich, London and Stafford. Fortunately, I managed to convince Tree (of MPF/Anarchistic Undertones fame) to join me, so I wasn’t alone for the ride.

Manchester’s show at the Star & Garter is unquestionably the best gig I’ve been to this year (and I’ve seen Propagandhi twice). Perhaps it’s the intense heat. Perhaps it’s the crush of friends at the front. Perhaps it’s the insanely good performance from one of my all time favourite bands…  or perhaps it was the excitement of knowing I get to do it all again for the next three days. END_OF_DOCUMENT_TOKEN_TO_BE_REPLACED

Listen to our Spotify playlist for all of June’s hottest tunes!

The whole team at Shout Louder is addicted to music, whether that’s live, on record or just sung badly in the shower. There’s not enough time in the world to review every record we love, so we’re going to share a monthly Spotify playlist with you.

Enjoy this month’s selection of tunes – featuring many of the bands we’ll be catching live this month. Here’s what we’re listening to:

Dan and Rob from melodic hardcore heavyweights Darko join Sarah for a chat. We talk lyrics, cocktails and tour stories. Dan shits his pants and Rob gets shat on by a bird. Don’t miss this! 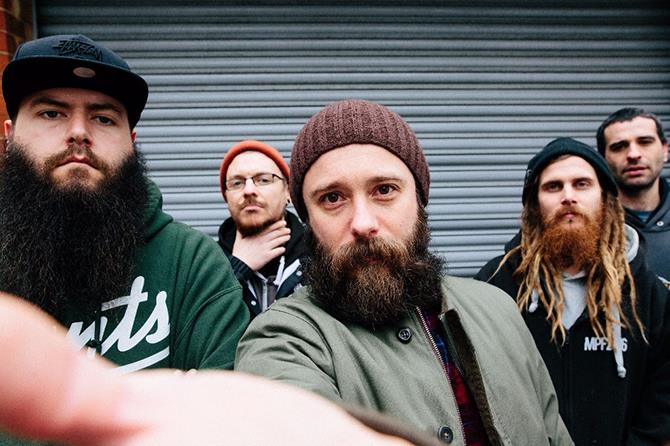 Darko are simultaneously one of the hardest-working and hardest-partying bands we know. They are all dedicated, intelligent and serious musicians… but that doesn’t mean that they’re above telling us about shitting a tent at Punk Rock Holiday.

Join us for this special episode of the Shout Louder Podcast with Dan Smith and Rob Piper of Guildford’s melodic hardcore tour-de-force: Darko. We have an in-depth chat, finishing with the most embarrassing Worst Time story we’ve heard yet.

We also tell the tale behind the ‘summer cocktail’ bundle they have recently announced, with a gorgeous yellow/pink/blue splatter re-press of their stunning album Bonsai Mammoth. I wanted to find out a bit more background behind some of the songs and how the band manage to balance their punk rock lifestyles with their day jobs.

You can also enjoy music from Forever Unclean, Money Left To Burn and A Wilhelm Scream. And Rob gets shat on by a bird. You wouldn’t want to miss that. Subscribe on Apple Podcasts, Soundcloud or wherever you get your podcasts!

Darko’s summer cocktail bundle can be pre-ordered from Lockjaw Records, with special edition t-shirts and posters – you can pick up a copy here.

Darko are heading out on a rare UK tour with A Wilhelm Scream in two weeks time. Shout Louder strongly recommend that you go to as many dates on this tour as you possibly can. Here’s the full list:

END_OF_DOCUMENT_TOKEN_TO_BE_REPLACED

Sarah speaks to melodic hardcore powerhouse A Wilhelm Scream about their upcoming UK tour. “No one will survive. Not even you.”

Melodic hardcore legends A Wilhelm Scream will be coming to the UK for a seven date tour in June, before heading over to the mainland for an epic month of club shows and festivals with bands like Descendents, Pennywise, Astpai and Darko! We at Shout Louder honestly couldn’t be more excited.

For those unfamiliar with A Wilhelm Scream, they are a 5-piece powerhouse of hardcore talent from New Bedford, Massachusetts. They’ve been killing it on stage since 1999, however the band are probably best known for their classic 2005 album Ruiner and 2007’s Career Suicide. They’re a band who’ve been said to scrap songs from their albums because they’re just ‘fast’ rather than ‘very very fast’, running in the same category as Strung Out, Strike Anywhere or Propagandhi.

As personal heroes of ours, we jumped at the chance to speak to drummer, Nick Angelini, ahead of their UK tour.

Hi Nick! Thanks so much for talking to me.

You’re planning a killer month-long tour around Europe and the UK in June. How do you plan to survive such an awesome few weeks?

No one will survive. Not even you.

You’re touring with Darko, Pennywise, Descendents and Astpai, plus a handful of festival dates. That’s a hell of a line-up. What are you most excited for?

I am super excited to play more shows with Darko. I listened the crap out of the last CD they gave me.  I’m excited to watch them play, knowing the songs now. They are all great bands. Legends. Darko is really kicking my nuts off at the moment.

You’ve got an impressive back-catalogue. Of your recordings, which are you most proud of and why?

I am really proud of all our records. It is hard to pick just one. It’s like having five human babies and saying baby Fernando is my favorite.

My favorite thing to play live is my Wail City Drum Kit. I dreamed of building a full drum kit for many years. When I finally pulled it off, I was so happy and proud. Every time I play it on stage I am like a proud pappy. END_OF_DOCUMENT_TOKEN_TO_BE_REPLACED