Check out all of Ollie’s articles here. 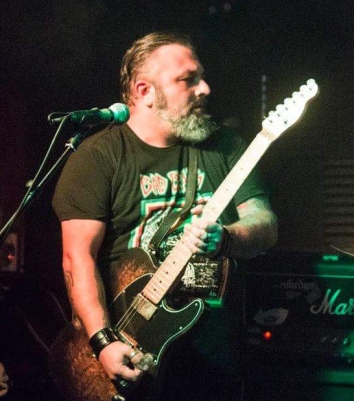 Introduce yourself! Who are you and what do you do?

That is a good question! I am an old man with a lifelong addiction to noisy music. I’ve been playing in bands for way too long… thrash, punk and since 2003 a band called Grifter. We’ve had the record deals, done the touring, played the festivals (Bloodstock, Hard Rock Hell, Desertfest… etc.), been to Europe and had a jolly good time. We’ve been classed as stoner rock but I hate the term… end the genre. We’re a rock band, albeit a rock band in stasis. I’m currently putting together something far more rooted in my love of punk, rock and roll and noise. I’m married, have 3 kids, work a normal job, have a twisted and highly inappropriate sense of humour, enjoy swearing and shouting at the telly.

What was your introduction to punk?

As a teenager in the early 80’s I was a die-hard metal head living on a steady diet of Metallica, Slayer, Venom, Mercyful Fate, Iron Maiden, etc. Although the Sex Pistols were long gone and I was in my room blasting songs extolling the virtues of Satan, my mum decided they were the epitome of disgust and expressly forbade me to ever buy a Sex Pistols album. In perhaps my first move of punk rock rebellion I bought the Flogging A Dead Horse compilation the very next week, the one with a turd on a gold record on the back cover. From there the dominos continued to fall as I immersed myself in The Ramones, Bad Brains, Dead Kennedys, Black Flag, Discharge, The Exploited then eventually the UK hardcore scene of the late 80’s where I started to take notice of the messages behind the music… messages that still ring true to me to this day.

If you could be in any band in the world (past or present), which band would you choose and why?

I should probably say my new band (which may well be old and well established depending on when you read this) but I’m going to say Motorhead. As my favourite band of all time it would have been incredible to share a stage with Lemmy for even 5 minutes and soak up a fraction of the greatness.

You’ve got unlimited funds, a time machine and any venue you fancy, but you can only book three bands. Who do you book for your ultimate gig?

I’m going to use my time machine Bill and Ted style to grab 3 bands from different eras so first up, Motorhead circa 1980, their peak with the ultimate line-up. Next up Bad Brains circa 1982 before HR went a bit mad and was arguably the greatest punk front man ever. Having watched footage of the band from that era there is no-one to touch them. Third would have to be AC/DC with Bon Scott… just because it’s AC/DC with Bon Scott and you can’t argue with that! And venue? Something small and intimate… maybe the Fleece in Bristol or The Underworld in Camden… or CBGBs in New York if I have the cash!

You’re on an aeroplane that’s about to crash. What do you put on your iPod?

It would be tempting to say a podcast on how to survive a plane crash, but if the inevitable is going to happen probably something by Buddy Holly or Lynyrd Skynyrd… seems appropriate for the situation!

Check out all of Ollie’s articles here. Get to know the rest of the team here.

I keep forgetting that I published a book. PAPERCUTS is a collection of stories from folks in the DIY punk rock community - we've still got some in stock!
SAD NEWS 😢 Unfortunately, Jo and I have decided to postpone our @garlicbreadpunk birthday bash on January 22nd. We'll now be pretending it's our birthday on July 30th instead!
TOP 10 RELEASES OF 2021 🏆
WOTSIT CALLED FEST REVIEW ⛱️ Head over the site to read my review of my favourite seaside weekend!
Are you coming to our birthday bash? 🎂
REUNITED 🎉 Saw some amazing Southerners for a terribly important business meeting today.
What's your album of the year? 🏆 I've made a playlist of 100+ killer punk rock tracks that landed in 2021.
NEW PODCAST 🔥 Listen to our latest punk rock radio show wherever you get your podcasts.