Check out all of Mark’s articles here! 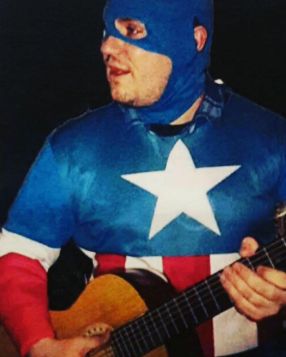 Introduce yourself! Who are you and what do you do?

Hi, I’m Mark. I’m the front-person for Our Lives In Cinema from London. I also used to be the singer for The Separation. When I’m not doing that, I like to make comic books with my friends over at Deadly Foe Comics. I love film and have written for Flickering Myth, Screen Rant and Close-up Film. I’m a manager for Picturehouse Central in the West End; we won the Screen Awards cinema of the year for 2016. My favourite Musician is Jeff Rosenstock, my favourite UK band is Fresh and I have an insatiable appetite for comic-book movies.

What was your introduction to punk?

A tape I was given of Nirvana’s Nevermind, but watching Rocket From The Crypt busting through On A Rope during the musical segment of TFI Friday’s was the real life changer.

If you could be in any band in the world (past or present), which band would you choose and why?

I’d fuck up my favourite bands by being in them. I’d be in something cultish like The Polyphonic Spree. I’d get to wear a white robe, hang at the back and have a low pressure role like playing the triangle.

You’ve got unlimited funds, a time machine and any venue you fancy, but you can only book three bands. Who do you book for your ultimate gig?

Prince, Nirvana and Bomb The Music Industry at the London Astoria.

You’re on an aeroplane that’s about to crash. What do you put on your iPod?

Stuff That I Like by Bomb The Music Industry.

Check out all of Mark’s articles here! Get to know the rest of the team here.