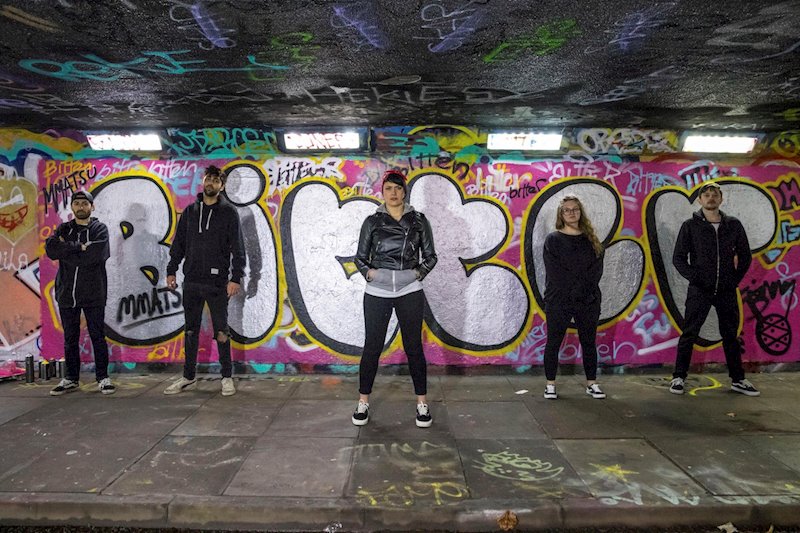 Millie Manders & The Shutup are one of the UK’s forefront modern ska-punk bands, specialising in clean, bouncy pop tunes driven by Mille’s exceptional vocal talent. They have been putting in the miles for years, but it’s only in 2021 that they’ve released their debut album Telling Truths, Breaking Ties. They’re currently in the middle of a huge 26-date UK tour, and they’ve landed a support slot with Less Than Jake in the spring of 2022.

We caught up with songstress Millie about drafty vans, bloodstained guestrooms and the joys of being recognised at a service station.

You’re on the road right now. How’s it going? Did you find touring in 2021 any different to your previous trips?

It’s been such an incredible tour so far. I’d say the highest so far has been in Newcastle at Cluny 2. It was our first show in Newcastle and the venue was rammed. From the moment we started, we could hear people singing our songs with us, and midway through the set there was this mad, spontaneous applause when I thanked them for welcoming us to their town. It just kept going and I was trying to hold back happy tears because it was so overwhelming.

The lowest low was definitely the accommodation after the same show. We stayed at this guest house about half an hour away. There was mould and damp everywhere, the rooms smelled like smoke, and I found what looked like blood stains on both my towels and bedsheets. It was scary-grim.

I think this tour has been different because it’s the first time we are headlining, and the first live outing of our album, Telling Truths, Breaking Ties. I think that’s made a huge difference. It’s a double whammy of people thankfully loving the release, and our lovely fans and friends not seeing us for two years.

Have you ever looked around on tour and thought ‘what the fuck is happening’? What had happened?

To be honest, I feel like that most shows when people are showing up and singing along! It never gets any less unexpected. We did actually get stopped in a service station yesterday, though, on our way to Cardiff … A guy ran up to us: “Are you Millie Manders and The Shutup? I listen to you on Primordial Radio! Can I get a picture with you all?” I swear to God all of us had eyes as big as saucers. It was so surreal.

When was the first/last time that you had a ‘fuck, this isn’t worth it’ moment? How did you overcome it?

I have genuinely never had one of those moments. I think for me it’s more, “Can I keep going? Can I afford this? Can I feed my cats?” But I don’t ever think it’s not worth it. Even in the darkest times, it’s my music and my band that keeps me trucking. I couldn’t live without it!

What’s the furthest you’ve ever driven to play a 30-minute set?

Darwen Live. I think it was a 7-hour trip each way because of pickups and drop-offs to play a 35 min set in the pouring rain outside. It was sideways freezing rain coming into the stage. We still loved it, but we were very broken the next day!

What are your tips for surviving a tour?

Have a good eating schedule and seek out good food. Have a blanket, water bottle, coffee cup and travel pillow. Comfy travel clothes. Look after your body and your instrument (even more important if it’s your voice because your body is your instrument). Try not to sweat the small stuff. If you left on time but there’s a road accident, there’s nothing you can do about it. Be organised AF! Then there’s less small stuff to sweat. Finally, and most importantly, surround yourself with good people who you can trust so you all have each other’s backs.

Do you have a long-serving tour vehicle? What are its quirks?

One sliding door only locks from the inside. It beeps its horn every time you lock it, as a result. There is no air con and only heating in the front and the doors don’t have good insulation, so in the winter it is freezing. The window at the front on the passenger side doesn’t open so in the summer you can get burned through the glass. It whistles and creaks in the wind. So many quirks.

What’s your soundtrack in the van?

Snoring! We more often than not catch up on sleep in the van. But we do have an ace tour playlist with all the bands we have/are sharing stages with on this run, on Spotify.

Do you have a luxury item you take with you?

We always have ground coffee and a cafetiere. I hate instant coffee and our Tour Manager, Jeff, basically has coffee instead of blood. We are both coffee snobs.

Are there any van in-jokes that are safe to share with us?

Not really, but Alex is definitely the joker of the band. He’s constantly taking the piss out of everyone. His latest fave thing is changing the lyrics of Your Story to keep us entertained … “Just want a bite of your sandwich!”

If you could choose any band alive, which band would you most like to tour with?

Oh, lordy there are so many. James would say Gold Finger, Alex would say Blink 182. George would go with You Me At Six and I would likely say Skunk Anansie, Interrupters or Enter Shikari.

Millie Manders & The Shutup have a lot of dates booked right now. Catch them at one of these: