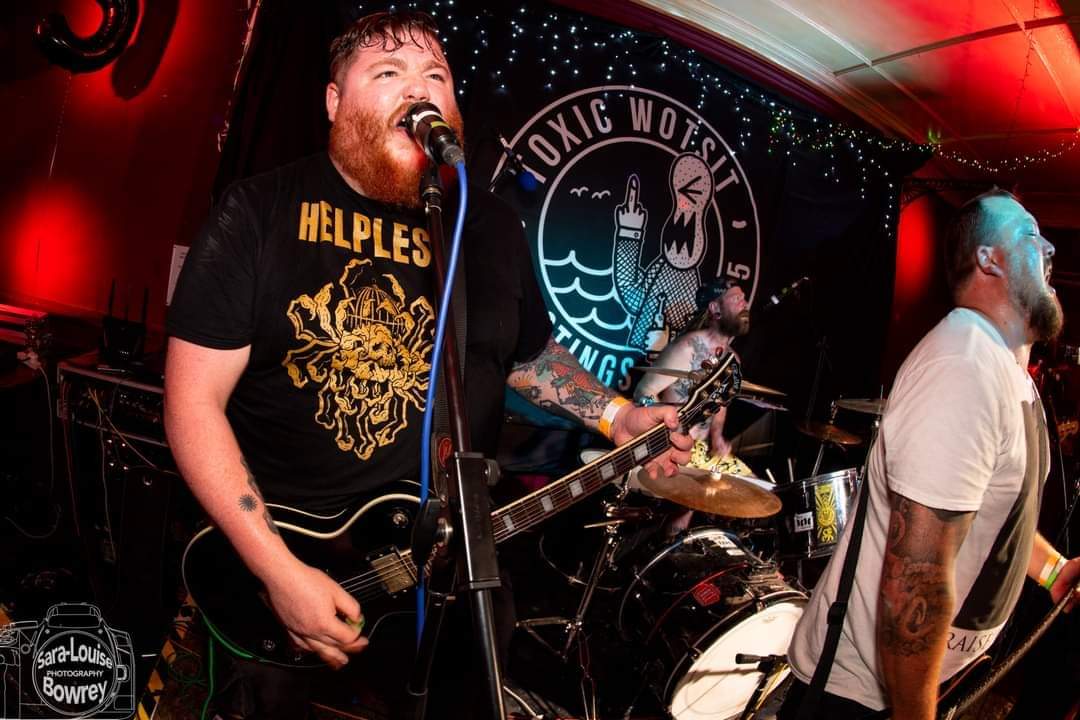 Simon Walker is a multi-talented chap from Falmouth: guitarist in Rash Decision and Monolothian, and host of the incredible Seabin Podcast. The Seabin Podcast is Room 101 for DIY punk rockers – a hilarious chat show that’s kept us going through the lockdowns.

We caught up with Si in Hastings at Wotsit Called Fest, where he was playing with Rash Decision, as part of their Fuck Brexit tour with Jodie Faster and Pizzatramp. We quizzed him about the recent tour, what’s it’s like being in a touring DIY band and what’s changed about touring in 2021.

You’ve just come off tour! How was it?

Tour was insane and intense, an absolute fever dream of sweat, stress, feedback and hardwood floors. The highlight of the tour was definitely seeing all of the friends in Hastings. Getting to meet all of these humans that I have been talking to and getting to know over lockdown in the flesh was glorious. This goes hand-in-hand with the lowest point, in that at the end of the evening in Hastings, I really could not deal with how much I was getting grabbed and touched without my consent, and had a bit of a personal freak out. Having people I barely know and complete strangers grabbing my beard, face, chest, shoulders, bum and genitals … really was not the one. That or just the lack of real solid sleep, lots of waking up and quick snoozes but no deep long sleeps.

Did you find touring in 2021 any different to your previous trips?

I didn’t really find touring that much different after the long pause I’m sure the Jodie Faster guys would disagree because they had to deal with the Covid and Brexit issues of coming over from France. But apart from taking tests on the road and wearing masks … everything felt as it should.

Have you ever looked around on tour and thought ‘what the fuck is happening’?

I remember playing a squat in Paris way back in 2009/2010 and it just being full of incredibly drunk/high French squatters with more dogs then I have ever seen in my life, running around. There was dog shit literally covering almost every square inch of the floor. I walked into the bathroom to punks shooting up and randoms handing me fistfuls or marijuana without reason. It was my first real tour ‘culture shock’ moment.

When was the first/last time that you had a ‘fuck, this isn’t worth it’ moment? How did you overcome it?

There’s been a lot of moments like this for me, I’ll be honest … I’m kind of not made for touring. I grew up spending most of my time alone and have a lot of difficult to explain mental health issues and trauma that makes it really hard for me to be around lots of people for long periods of time. I need my own space and get very, very low on tour, lower then I even really tell my own band mates. Every tour is struggle for me so it’s hard to really pinpoint any moments ….

I know this is a bummer of an answer. But, on a positive note, how I overcome this is by seeing how what we do possibly effects the lives of those who support us. No matter what band I’m playing with, or if they are talking about my silly podcast, anytime somebody has come up to me and said that something I was a part of made their life even a tiny bit better or easier. It makes it worth it and grounds me to a point where I can remove myself from my sadness and really enjoy it again.

Just remembered though, when we broke down in Ramsgate the other day and got relayed home by the AA and it took 18 hours to get home … that can suck my chode.

What’s the furthest you’ve ever driven to play a 30-minute set?

The furthest I think would be Oslo, Norway to Hamburg, Germany that was, for lack of a better term … Absolutely fucking savage! Ostrava on the border between Czech and Poland to London over night was also next level absurdity. Don’t recommend.

What are your tips for surviving a tour?
Tips for surviving tour. Bring antihistamines, heartburn tablets, anti-diarrhoea pills, toilet paper and – for the love of God – stay hydrated. I know it’s easy to just beer it up, but you really, really need to drink at least a couple of litres of water a day.

Do you have a long-serving tour vehicle?  What are its quirks?

Our old Rash mobile has sadly died, but that bad boy put in some fucking miles for sure: 100,000 miles of thrash. We carved of bits of its rusty body and sent them off with the tribute shirts to raise money for the new van which is also now sadly in the garage because the fucking engine caught fire. Nightmare.

What’s your soundtrack in the van?

Soundtrack to the van varies in the driver. If it’s Dave behind the wheel then you should expect lots of Pennywise and old school skate/street punk bangers, mixed in with Converge and Raised Fist. If it’s Tom behind the wheel then expect Rage Against The Machine / System of A Down … but one record that is always guaranteed to play at least once is Offspring – Smash!

Do you have a luxury item you take with you?

This is a new one for this last tour, but I bought myself a Nintendo Switch for my 30th birthday and that’s been awesome. Playing Pokémon Sword on long drives is top tier. Dave has really nice noise-cancelling headphones that I’m very jealous of because just wearing them without music and blocking out all noise sounds like heaven. But before then, I would say my biggest luxury item was just bringing a few pillows from my bed with me. I can’t sleep without loads of pillows, so while the dudes are scrunching up their hoodies for pillows I’m fucking laughing, mate.

Are there any van in-jokes that are safe to share with us?

A silly in joke in the Rash van is replacing lines in songs with “wosname” and “suck I off”. It’s hard to explain why it’s funny but it kills us. Also, we have this little tune that we whistle to each other from an obscene video and sometimes just out of the blue somebody will start it off and we all join in. On this last tour we couldn’t stop calling each other “YOU TOILET” and telling each other to “mange ma pipe”. We are children.

If you could choose any band alive, which band would you most like to tour with?

Me personally … I would love to tour with Iron Reagan, Propaghandi or Grand Collapse. We have tried to get a tour with GC going for ages but it just hasn’t happened yet. It kinda did a few years but it was only a couple of days and I want us to do it properly.

Check out The Seabin Podcast on Spotify and Bandcamp. Keep your ears peeled for Rash Decision’s new record, due out early next year. In the meantime you can follow them on Spotify or Bandcamp.