Check out Shout Louder’s musical highlights of 2020, including a playlist and a round-up of the year’s best singles and albums. 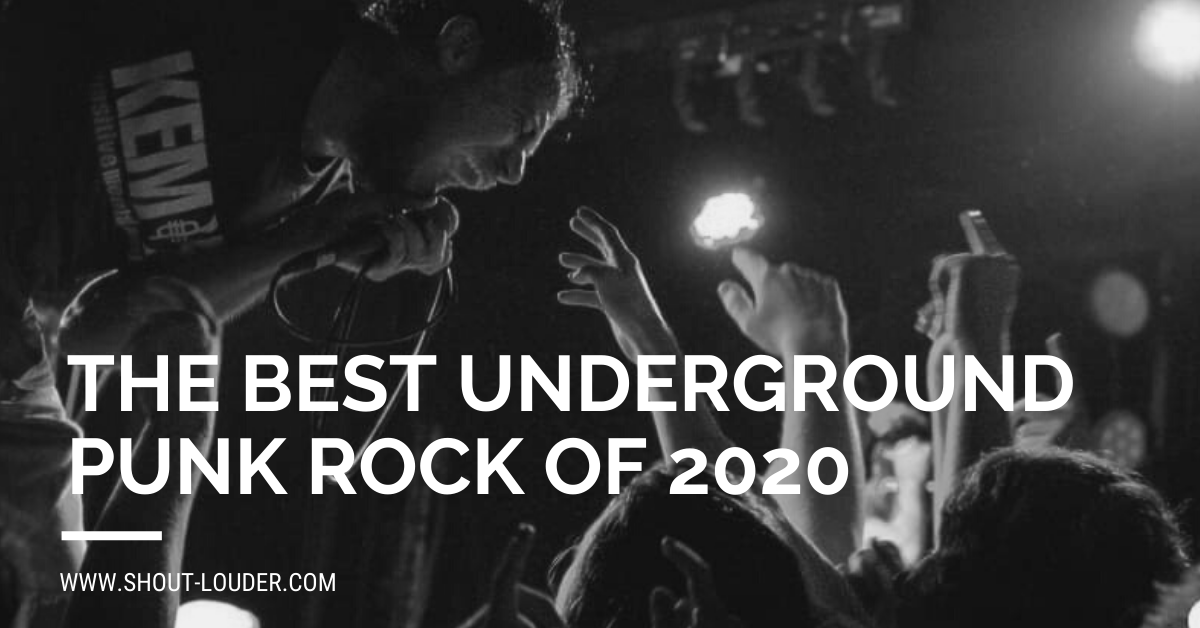 Listen to our Best Underground Punk Rock of 2020 playlist now!

In the words of Burnt Tapes, “This year’s been a weird one.”

Despite that, it’s not been a bad one. Shout Louder’s been quieter than usual, but I did publish two books (PAPERCUTS #1 & #2 – get yours here!). I started a punk rock radio podcast that was surprisingly popular (65k listens on Episode 4 is surely a fluke?!) and co-hosted Do It Together Fest… which I hope would have made a few folk’s ‘Top 10 Gigs of 2020’ list even if it weren’t one of the only gigs in 2020.

The musical landscape is not the only thing that’s changed dramatically in 2020, but it’s the one I’ve noticed the most. I’ve read that the unpredictability of the year’s events has driven people to a lot of nostalgic listening – replaying comforting past releases rather than diving into new albums. I’ve definitely fallen into that trap: it turns out I still know all the words to Anthology by Alien Ant Farm and every Limp Bizkit and Slipknot album.

I’ve also found myself exploring a lot of genres outside of ‘punk rock’, because for me punk is ultimately about live music. Without gigs, without all-dayers and without people buzzing with excitement around me, I’ve had less interest in discovering new bands. According to my Spotify Wrapped, I’ve spent 2020 listening to ‘jazz rap’, ‘neo-soul’ and grime instead. For anyone interested, my personal 2020 Bangers playlist can be found here.

I’m not doing a traditional Top 10 Releases but I didn’t want to let the occasion pass without identifying a few top albums, EPs and singles that I’ve enjoyed this year.

Listen to our round-up of 2020’s best underground punk rock releases on Spotify.

There were a few particularly notable musical highlights in 2020. To my mind, this has been the Year of The Single. Is that what the musical environment is in 2020? Has playlist culture won the battle against the LP? Are B-sides a thing of the past? Do we choose our music by ‘mood’ rather than genre nowadays?

Regardless, my ‘mood’ for 2020 has been lifted by some great singles from Goodbye Blue Monday, The Sinking Teeth, Camp High Gain, Drones and The JB Conspiracy. My only complaint is that I want more music from all of the above.

There have been some top album releases as well, but there’s not been one that I singularly fell in love with. Well, perhaps You Can’t Steal My Joy by Ezra Collective, but this is a ‘punk rock’ zine and we don’t talk about jazz (ssssshhh!).

Aerial Salad are the darlings of the Manchester punk scene, however they’ve made a big impact on the country with their stripped-back, catchy and self-deprecating tunes. They’ve nailed it on the videos this year too. Dirt Mall‘s an excellent step forward in the Salad realm and I just wish they’d been able to get out and tour it – this would be killer live. It’s a strong contender for my album of the year – the more I listen to it, the more I think they ought to be playing stadiums.

I’ve been banging on about how much I love Stoj Snak for years and I’m sure people are sick of listening to me, but there’s no doubt that Life Death and Everything In Between is one of the best underground releases of 2020. His unique vocal is the reassuring, enlightening tone that I needed to get me through the year, and his poignant lyrics are more relevant than ever. I’ve got a soft spot for the blend of folk with punk – plaintive acoustic sections melded with rowdy rabble-rousing jaunts.

Similarly, Spanish Love Songs are one of those bands, like The Wonder Years, who have a specific talent for speaking to a generation. Their lyrics capture a certain time and a certain angsty phase of life that’s relatable to a lot of older millennials looking bleakly upon their existence. It’s hard to deny that they’re one of the best melodic bands out there right now, and Brave Faces Everyone will surely be topping a lot of album-of-the-year lists, as it encapsulated the discomfort and mental anguish that we’re living in 2020.

Svalbard are vast and bleak and heavy, and have garnered some much deserved mainstream music press this year. Their popularity doesn’t make me love them any less, and their new release When I Die, Will I Get Better is as vicious and visceral as ever. A lot of the atmospheric guitarwork reminds me of classic Canadian melodic hardcore, but it’s got a distinct, dour British outlook and an acidic feminist edge. This album is as uplifting as it is destructively dark.

There are a few artists I’ve instantly fallen in love with this year, too. Where on earth did Borts come from, and how are they so good? I had an instant love affair with Broke Alone and the whole of EP1 just makes me beg for Album 1 – it’s a real gem. Swayze popped up out of nowhere with St Angry – five tracks of incredibly good Canadian melodic punk.

I was excited to hear that Adam Davis from Link 80 (one of my all-time favourite bands) was starting a pseudo revolving-door band called Omnigone, but I tempered my expectations in case it didn’t live up to my Link 80 expectations … I needn’t have worried! Their split with Catbite is incredible – the best ska-core I’ve heard in a long time.

My big prediction for 2021 is that there will be a lot of new music. I imagine some bands have held-off releasing albums this year that they’d already recorded, because they wanted to tour alongside the release. On the other hand, I reckon there’s an awful lot of musicians out there who’ve had time on their hands to write new material this year. I know a lot of folks have amped up their home recording systems, and are starting to smash out new records. Exciting times.

Well done for surviving this year and looking after each other. Hopefully next year, we’ll see you down the front.