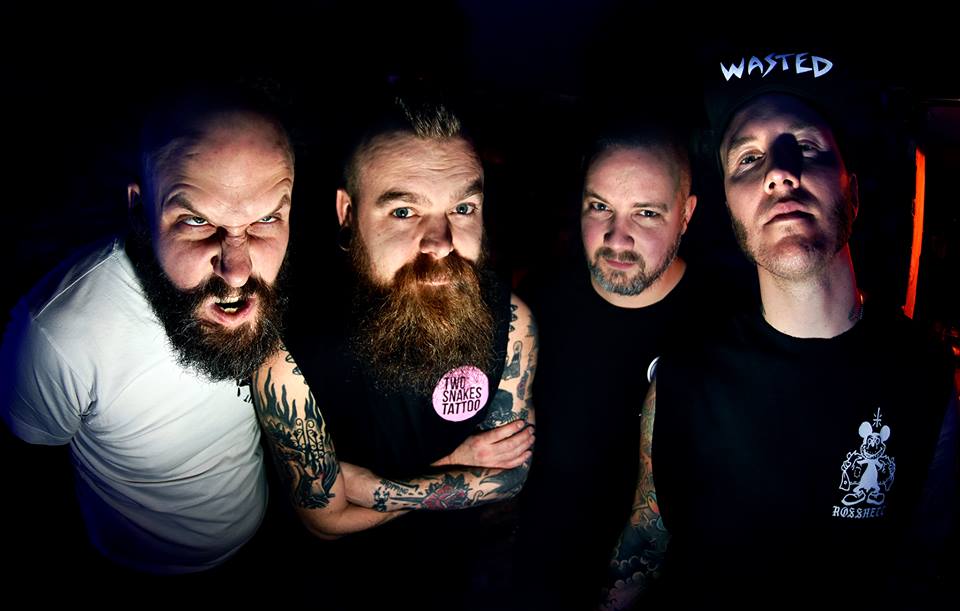 Sadly, this year’s Manchester Punk Fest has fallen victim to the COVID-19 catastrophe. Before then, Shout Louder had been working to write this year’s MPF program, including a series of band interviews. Rather than waste everyone’s hard work, we decided to post the interviews for your enjoyment here (plus keep an eye on Ear Nutrition for an excellent interview with Shai Hulud).

As one of the foremost up-and-coming bands on the current UK hardcore circuit, I was keen to speak to Haest. Based in their eponymous town of Hastings, they’re a sludgy, doom-laden co-project from members of Matilda’s Scoundrels, The Barracks, Knife Club and many others. No doubt familiar to Shout Louder’s regular readers (we’ve interviewed them in the past), they’re uniquely enthralling live, they’re also purveyors of excellent DIY music videos. They’ve recently released their first full-length album Anomie on TNSrecords.

We spoke to guitarist Dan Flanagan about all the joys of Manchester Punk Festival, their history and their tongue-in-cheek approach.

Many folks have given interesting descriptions of Haest’s genre. What’s your favourite?

The one we get quite often is Black Sabbath crossed with Black Flag, but my favourite and most recent is ‘Warzone dragging a dead elephant in chains’.

How would you describe yourself? What were you aiming for?

I’m still not sure how to describe us really. We set out to do something a lot heavier than most of us were doing with our other bands. We have a lot of different influences and have never really aimed to fit anything in particular.

Haest is a second-project for most of you. How did Haest get started?

It started back when Scoundrels had a break over the winter of 2017/2018. I got on a bit of a creative spree and wrote a bunch of songs but they didn’t really fit the style of Scoundrels. So Mark, Dan and I had a chat on a night about having a jam sometime. We meet up a few times over the next month, then got Dave involved. Everything clicked right from the beginning.

Your DIY-or-die style videos are some of the best around. What’s the most you’ve spent on a music video, and what’s the stupidest idea you’ve had for one?

We’ve only actually spent money on one video and that was to our mate who filmed and edited it, the rest we’ve all done ourselves on mobile phones. We’ve got an idea for one which we’ve had for a while, it’s going to be more of a mockumentary with that band Thröbbin’ Stixxx.

Your song titles are reportedly all based on practice room one-liners. What’s your favourite?

There’s far too many to pick or remember, we’ve had to set up a Facebook group message to store them. We’ve got hundreds and hundreds. My favourite thing is hearing radio stations and reviewers talk about them.

You’ve just released a full length album Anomie on TNSrecords. What was most challenging / most rewarding about the release?

We had a plan from the very beginning to write all the songs flowing into each other, kind of like it being one long song. It was written in the order Anomie is; we wrote each song once we knew how the song before it ended. In the end we felt it needed a few small gaps in places, but ultimately we’ve all created something we’re really proud of. We’ve also started writing the next album in the same way.

You play in Manchester more often than bad Oasis cover bands and Smiths discos. What’s your favourite thing about the city?

It’s got to be V-Revs and Bundobust, I wish we had either of them in Hastings. Manchester gigs are always great gigs, everyone just goes for it every time. We have loads of mates up this way and it feels like a second home to us.

What would you recommend to someone attending MPF for the first time?

I would say check out the Bandcamp playlists before going and try to see as many new bands as possible. The after parties are fun, especially the covers sets. Plus make sure you get cocktails at Font!

Listen to Haest’s album Anomie on Bandcamp, or grab a copy from TNSrecords.

I started the week with zero intentions of going to an arena gig on a Monday night, but I’m bloody glad I did.
Went to a big gig yesterday. I don’t go to a lot of big shows because … well, either because most of the bands I like are relatively unpopular, because I can’t ordinarily afford £30+ a ticket, or because I just don’t like them.
NEW INTERVIEW 🧟‍♀️ I talked to Sheffield based skate-punks Disaster Forecast about their zombie apocalypse plans, their pedalboards and why it's important to do music for fun
Never miss a punk rock gig in Manchester again 🐝
NEW INTERVIEW 👀 The latest in our Punk Rock Tour Tales series features Millie Manders & The Shutup.
Garlic Bread Club is the best night out in Manchester, I swear 🧄🥖
NEW PODCAST 🎧 I sat down with Joe Dimuantes from Sounds of Swami and The Human Project.
Holy shit 💥 I’ve only just learned that @pigsx7 are playing Manchester next Tuesday. Who’s in?