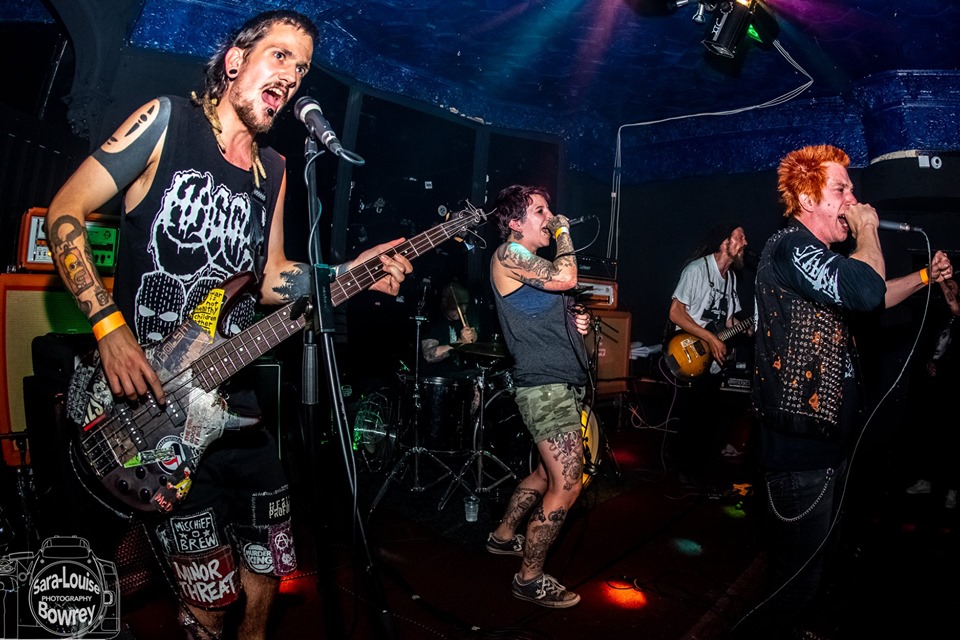 Scrappy, shouty and faster-than-fuck, Casual Nausea are long-standing TNSrecords favourites from Ipswich, Suffolk. Earlier in 2019 they released a stunning album Demons, which was a huge step forward for the band both in songwriting and production quality.

Known for their DIY-or-Die approach and their sunny attitudes, we were keen to talk to Casual Nausea about their album, their ethos and their Suffolk roots. Answers are from Zoe Barrow and Shawn Fendley, Casual Nausea’s impossible-not-to-love vocalist and drummer.

Welcome to Shout Louder! You helped us out when we were first getting started with the website, so I’ve been super keen to talk to you about the new album Demons.

Casual Nausea has been a band for a long time – could you give us a brief band history lesson?

We formed in 2012 as a bit of a laugh and something to do. We had all been friends for years, and most of us had at some point been in bands with each other before. We never really thought it was going to go anywhere but were all up for giving it a go.

Our first gig was at the Grinning Rat in Ipswich on Friday the 17th of August 2012. Since then we’ve played all over the country, have done two tours in mainland Europe. Played Rebellion, Boomtown, Manchester Punk Fest and loads of other amazing festivals, but have mostly spent a lot of time in cars with each other discussing poo.

In 2013 we put out Change Your Reality: a sixteen track extended demo (some of us consider this our first album) recorded by our friend Rhodes (from The Domestics). Then in 2015 we put out a self-released split EP with Chewed Up on CD, which was later released on pink vinyl by TNSrecords. In 2016 our then bassists Briggs decided to call it a day. He was replaced briefly by Kai for two gigs, before Matt became our forever bassist. It then took us three years to record and release Demons. It’s been a lot of fun.

You’ve recently released Demons on vinyl on TNSrecords. It’s 19 tracks! How does it feel to have the album out in the world?

It’s amazing. It’s been along time coming, and has taken a lot of time and effort, especially considering our terrible organisational skills. Personally 2018 was a massively shit year for most of us, so having something positive to focus on was really helpful.

In terms of songwriting and recording quality, I feel Demons is a huge leap into the future for Casual Nausea. It’s fantastic. Are you happy with the outcome? What’s your favourite part of the record?

Thank you, we couldn’t be happier. Ben Hannah at The Organworks Recordings did a ridiculously good job. Going above and beyond, even agreeing to move his studio from Leeds to Ipswich last minute when we found ourselves with no transport.

Not only is he obviously very good at the technical side of things (twiddling the knobs and that), he is also is a proper lovely person. He created an atmosphere we all felt comfortable in, and seemed to know exactly how to get the best out of us. I don’t think we could have done it without him.

Although we are all really proud of our previous recordings, I think its fair to say Demons by far best represents what we do as a band. It’s hard to pick a favourite part, but the acoustic version of Blood In The Oil makes me happy. It only came about because we all had a bit of a meltdown recording the loud version. To get us back on track Ben suggested having a couple of run-throughs acoustically, sitting in a circle on the floor. It was all recorded through one mic in the middle of the room. We weren’t expecting anything from it, but were chuffed with the end result.

What was most challenging about the recording?

We recorded in a concrete bunker on an ex-military base about 15 miles outside of Ipswich. We had no transport between us, so it was a massive logistical nightmare getting all of us to and from there each day. We had loads of help from our friends and family so just about managed it.

Also, Zoe stabbed herself in the hand prising apart frozen vegan burgers at about 1am in the morning after a full day’s recording. This resulted in an all night trip to A&E, stitches, and eating her dinner straight out of the oven whilst sitting on the kitchen floor at 7am, and then recording all her vocal parts that day.

At the same time Matt, who seemed to only be consuming cheap cider and large amounts of apple juice, unsurprisingly developed a proper bad case of the shits. Making the only poo place (there was no toilet) unusable.

There have been rumours about the origin of your name: it is true it comes from Zoe’s nervous mid-set voms?

Unfortunately this is just a happy accident. From my blurred memory, I’m pretty sure we all just came up with a list of names, had a vote and Casual Nausea happened to be the least offensively rubbish (although that is still up for debate). However, it is true that I am partial to a little nervous sick or two on stage. It’s more like frothy sea foam to be fair.

As a band and as individuals, you live the mantra of your song DIY Or Die. How has taking a do-it-yourself approach directed your journey as a band?

We were blown away when TNS told us they were interested in releasing the split. I’m sure everyone reading this knows all about TNS so I won’t go it to detail, but they perfectly demonstrate what can be achieved with a DIY ethic. The punk scene is built on people all over the place doing it themselves, and creating their own fun. Without other DIY bands and promoters none of this would be possible for anyone. We try to go to as many gigs as we can, watch as many bands we can, and try to make everyone feel welcome at our gigs.

You’re supportive of other acts in UK punk rock, partly through putting on your own shows in Ipswich and helping to foster an interconnected and accepting community there. What would be your advice to fans that are looking to support underground acts?

It’s all pretty obvious to be honest. Most people do all this anyway. Go to gigs. Get there from the start, so the promoter isn’t panicking that no one’s coming. Watch all the bands. Never try to dodge the usually reasonable door charge. Buy the bands merch if you can afford it. Try to make everybody else feel welcome. Put on a gig!

You grew up in Ipswich (and surrounds). What influence do you think your hometown has had on you as artists?

The Ipswich punk scene has always been pretty special in my opinion. It’s small but loyal. Everyone comes to everything, and bands always seem to have fun playing here. The town has a great punk rock heritage with The Adicts, Extreme Noise Terror and The Stupids all calling it home, but the Ipswich band we all grew up watching would definitely be Red Flag 77.

From an early age we have been snuck into gigs and were treated like instant family. There was a real sense of belonging. It taught us how to put on gigs, inspired us to start our own bands and introduced us to the concept of the punk rock family. You can’t help but take influence when you’re surrounded by such an active and passionate punk scene.

Later on, Ipswich legends Tammy and Mike started putting on gigs at The Royal Oak. The gigs there were always so good, and they always went out of their way to make the bands feel welcome. They made a lot of headway bringing in loads of bands who otherwise would have never consider coming to Ipswich, and showing them a really good time. We only started putting on our Uncomfortable Beach Party gigs when they lost The Oak, because we missed all the good nights! They introduced us to a lot of bands we now play with all the time and consider good friends. .

What have been the most successful and most disastrous gigs you’ve played over the years?

We’ve somehow ended up playing loads of amazing gigs, it’s hard to pick the best ones. MPF 2019 was unbelievable. The turn out and crowd shenanigans were mind blowing. We were properly humbled by that. The whole of the Germany tour we did with Chewed Up and (the best band in the world) 2 Sick Monkeys was also pretty incredible! Almost every gig was a banger and it was such a good group of people to be travelling with.

We’ve not had too many disasters to be honest. Obviously there have been times when we’ve played terribly. Or there’s not been a great turnout. Or the P.A was a home hifi with only one barely working mic. But even on those occasions at least some of us are usually still having a good time. Often times, one of us will think a gig’s gone really badly and everyone else thinks it went well, or vice versa, but we always try to make the best of it and have fun no matter what.

What are your ambitions for Casual Nausea in future?

To carry on getting to play all over the place, with awesome bands and meeting loads more lovely people. We would like to tour mainland Europe again (if that’s still going to be possible after Boris’ double hard in ya face Brexit), and start working on another album.

Follow Casual Nausea on Facebook, and check out raucous the gigs they put on in Ipswich at Uncomfortable Beach Party. Listen over at Bandcamp, or pick up the vinyl / CD versions of Demons over at the TNSRecords website.