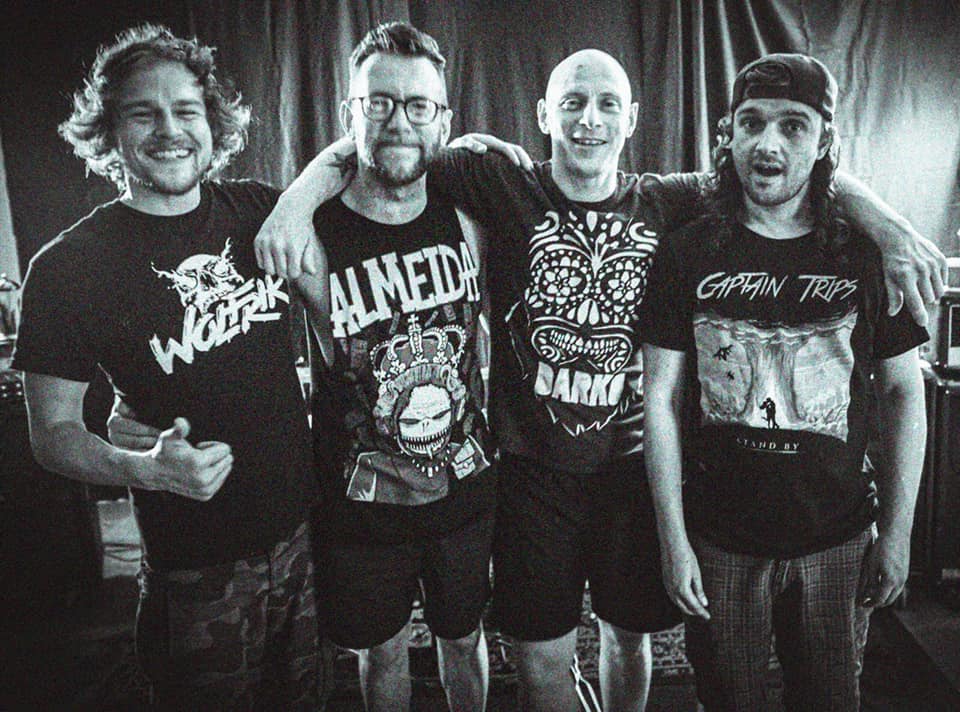 Birmingham’s fastest skate-punks Laughing In The Face Of have teased us with two video singles so far this year. They’ve posted plenty about the recording and mixing of their new record, which will be their first since 2013’s The Governor.

As a long-established band on Shout Louder’s sister project Lockjaw Records, we wanted to give them some much deserved hype, and find out what they’ve been doing with the last 6 years. We interviewed Steve Lowry (vocals, guitar) and Jimmy Carroll (bass) to learn more.

Rumour has it that you’ve got a brand new album on the way! How long’s that been in the works?

Steve: That rumour might be true. Both writing and recording were a long process. With writing, we just did what we could without forcing it into a time frame. We wanted to make the best out of it. No filler, every song well-thought out, nothing we would feel even remotely disheartened by at the end. I mean, we all wanted to get it done, but realistically it was never gonna be a quick job.

Writing started late 2013, months after we released The Governor EP. We didn’t use the first song we wrote for it in the end, so the oldest song on this new record was actually written in 2014. We had finished most of the writing process by the end of 2017 (except for the lyrics of 3 or 4 songs, which I wrote later during the recording process) and started recording end of January 2018. We finished in May 2019, which includes time spent on mixing and sending it off for mastering.

Time’s passed since Lubrication of Social Anxiety in 2011 and The Governor in 2013. What changes have there been in the band since?

Steve: The line-up on Lubrication… consisted of Stu on bass, Kris on guitar, Andy on drums and me on guitar and vocals. That line-up was the same from when Andy joined in 2004, right the way up to mid-2013. Kris and Stu were also in the band for the first 2 years from 2002-2004, along with me… and several drummer changes. Honestly, not even one of them died in a suspicious gardening accident or spontaneously combusted onstage!

It remained the same for a while after Lubrication… and also for The Governor EP in 2013. Kris decided he didn’t want to do it anymore during that year and Stu did the same in 2016. Before then, we’d already had Jim filling in bass on a tour and some other gigs, due to Stu’s commitments as a teacher. We didn’t have a full-time bassist for a while and practised as a 3-piece, then Jim would sometimes come down… or he’d agree to play some gigs then practice like mad with us leading up to them.

In the end I think he just decided, “Fuck it, I’m in the band.” He agreed to play on the new record too at that point, which was extra awesome for Jon and me, because we thought we were having to split the bass parts between us. So, yeah, two band members have changed since Lubrication… and we were lucky to already have been mates with both Jon and Jim for years before (and been in other bands with them!).

Can listeners expect the classic LITFO they love on the new album, or are you taking a new direction?

Steve: It’s possibly faster?! I feel like we’ve taken all the things we like and were doing and some things we were trying to do before and then just evolved a bit and did them better. It’s fast, hyper and melodic with choruses and it’s full of riffs and heavier influences. To us it feels like the best thing we’ve done so far, so it’ll be cool to see how it goes down with those who check it out.

Is there a theme to the album, or are there any lyrical messages you’re hoping to convey?

It’s the awareness of how we live, how we treat each other in this seemingly short amount of time and the petty things we squabble over – which really don’t mean much in the grand scheme of things.

There’s not a lot of politics, but in a couple of bits there’s a fear of things continuing to make their way down the shitter and what might come from terrible ‘leaders’ and decisions. Some were written during some kind of anger or anxiety and there’s some written retrospectively whilst in a better frame of mind, which was quite refreshing and cathartic.

Jimmy: Personally, this was my first time tracking a full length, so it felt a little daunting at first but eventually I got into the swing of things. I’m a guitarist originally, so it was interesting to come at recording bass tracks with a guitarist’s mind and try to keep it challenging… but also know when to just lock in with the low end.

Steve: As I was engineer and mix producer, it was very meticulous and time-consuming for over a year, but also great at the same time. I feel like this album has made us all a bit better at what we do, because it’s the most self-critical we’ve ever been about writing and tracking the instruments and vocals.

Did you encounter any major challenges?

Steve: Lugging my recording gear back and forth from home to our lockup studio a few times a week was a mild pain in the ass, because my flat is on the top floor and just has stairs, but that’s nothing really! It’s all good, that was my exercise. At least that way I could edit and mix at home after work in the evenings or on weekends when we weren’t tracking at the lockup.

In the video for your new single, you’ve given a nod to a lot of other skate-punk bands and to Lockjaw Records’ Coffee. Which bands do you think are really killing it right now?

Jimmy: Off the top of my head…Wolfrik, Mainline 10 and Layman’s Terms are some immediate answers. Ooh, the new Bash Brothers record absolutely kills it!

Steve: Absolutely. Fabled Mind sound fucking good too, looking forward to hearing more from them! There’s a lot of ace bands out there right now within the punk and melodic hardcore thing. New stuff like those guys and then there’s bands that have been around for years like PMX who are working on a new album and you know that’ll be exciting. Oh and the coffee was tasty, nice one!

How do you think the punk rock environment’s changed in the time since your last release? Do you think it’s easier or harder to release a DIY record now?

Steve: It’s easier to release something DIY because you’ve got all these digital platforms as well as physical pressing. Not that the platforms weren’t there when we did our last record, but they’re stronger now and I guess people are developing them all the time. Personally, I’ve always liked vinyl, but I think the online accessibility is good too.

I think the punk environment seems strong at the moment and there’s a lot of positivity around it, which is great. There have been times earlier on in the 17 years that we’ve existed as a band that things seemed quite difficult and dead for a while. Promoters still often struggle and are heroes for going out of their way to make things happen! It’s so good when it works.

What part of the album are you most proud of?

Jimmy: This might sound daft but I’m really proud of it sounding like an actual album, as opposed to a bunch of songs just thrown together. We did put in a fair amount of attention to the sequencing of the whole thing and I feel like it flows from start to finish very smoothly.

Steve: Yeah, it’s like an actual album. Which is cool considering it was mostly written sporadically, concentrating purely on one song at a time. I’m happy with the songs, the order and the production. Everyone did a proper good job of it. I don’t think I’ve ever put so much energy into anything.

Birmingham’s not well known for it’s music scene. Is there anything we should be keeping an eye out for, from the local scene, or any creative spaces in the city?

Jimmy: This is a difficult one to answer. I think in regards to our particular type of punk, I’d be confident in saying that we feel more spiritually at home in cities like Manchester or Bristol. That’s not say that there’s a dearth of creativity or spirit within Birmingham by any means. I was at a hardcore show a couple of months ago made up of all local bands and the pitting and enthusiasm was amazing!

The folks behind the annual Punx Picnic in Digbeth do some amazing work too but they are currently facing the all too familiar story of new venue owners taking over and not holding the same values, which puts things in jeopardy. A massive issue within the city is new residential buildings being put up next to established venues and we all know what happens next in that case.

What are you ambitions for LITFO in future?

Jimmy: For me, get as far and wide as we can. Play shows, make new friends, reunite with old friends, hug and drink beers together. Without being too sappy, music and punk in particular can show you how beautiful life can be at times.

Steve: That’s exactly it. It’s been my home since 2002. I can’t get the same kind of enjoyment out of much else, personally! At the time of writing this, this record’s not even out yet and I have been writing some new bits and bobs.

Laughing in The Face Ofhave so far released two singles from their upcoming album Here Lies Ordinary.  Keep an eye on Lockjaw Records for news of the release.