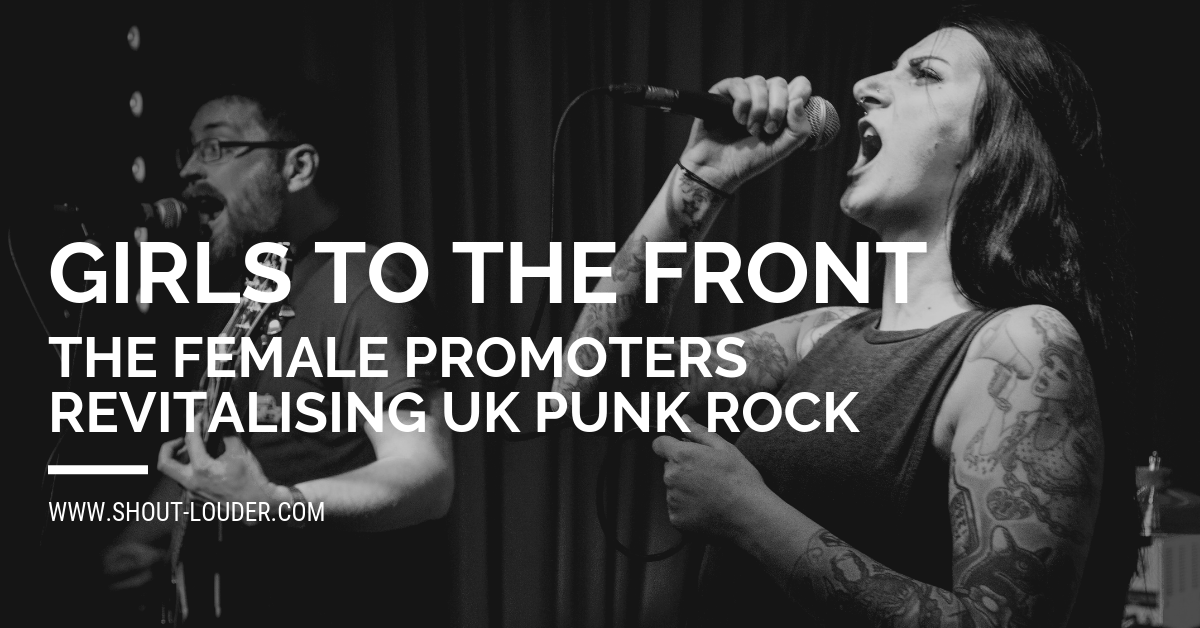 Although it’s one of the more progressive communities, even in 2019, UK DIY punk rock remains a veritable sausage fest.

Attending shows as a woman alone, I’m often asked who my boyfriend is, which band member I’m banging, or whether I’m actually interested in the music I’ve paid good money to listen to. When working at shows, there’s an assumption that I’m there to help out on the door or sell merchandise, and that I wouldn’t know the difference between an XLR and a Speakon.

I organised Shout Louder Fest in February 2019 but, in the run up to it, multiple people assumed that I’d employed Ian ‘Tree’ Robinson of Anarchistic Undertones to book it for me – I was just tagging along at my own gig (comments which he did his best to quell). As someone who frequently writes about punk rock, I’ve often had folks on the internet assume that I’m a guy, even when Shout Louder profiles are full of selfies with my hair running amok. Out at gigs with our resident photographer, Josh, it’s often assumed that he’s the running things and I’m simply there to hold his lenses.

So, although the punk scene is an increasingly inclusive space, there’s definitely still work to do.

In the past months in Manchester and Leeds there has been an explosion of women becoming more active behind the scenes. All the women in question have been involved in music for most of their lives but, somewhat by inspiration and somewhat by necessity, its midway through 2019 that they’ve chosen to cast aside their other commitments and start putting shows together.

At the forefront of this timely upsurge is Holly Searle at Hell Hath No Fury Records. Holly’s an inspiring feminist who started putting on shows in Bristol a couple of years ago but recently relocated to Manchester.

“Our aim is to provide a platform for womxn, non-binary and queer inclusive bands in a largely cis-male dominated punk scene,” Holly says, of the Hell Hath No Fury initiative. She’s an excitable and enthusiastic promoter who wavers from nervous to confident in relatable way, dedicating her time and effort to giving womxn a platform: whether that’s through organising gigs and tours, releasing records, promoting compilations, blogging or simply giving fanfare to the bands that deserve it.

“It’s my belief that to achieve true equality we must exercise equity first. It’s not as easy as a 50/50 split: it’s about dealing with the issue at source. There are plenty of womxn, non-binary and queer punks that are systematically made to feel that they are not good enough to play music, and there’s inherently been little to no representation in the scene.”

To counter this, Holly’s putting together Hell Hath No Fury Festival in Manchester over May 31st – June 1st. The first HHNF Festival took place in Bristol and was a great success, however 2019’s effort is bigger and bolder. War On Women and Mobina Galore are impressive international headliners, playing alongside heavyweights like Petrol Girls, Drones and Cultdreams.

“It’s all a domino effect really,” Holly explains. “Putting on a non-cis-male-centred festival is just one small (but effective) step in the long journey to obtain true equality. We are all part of one big grassroots feminist/queer punk community, whereby we all support each other, give advice, promote and release music. It works.”

Working as a community to support and encourage one another is what’s created the upsurge in recent female promoters. Seeing the success of grassroots operations like Hell Hath No Fury is inspiring to other womxn.

The traditional representation of female friend-groups is bitchy and competitive: a cutthroat race to look flawless, find a great man and raise obedient children. There’s been a sea change as third-wave feminism has become more deeply ingrained: female circles are increasingly seen as supportive and empowering. Until recently, I was often intimidated by other girls at gigs because I thought they were ‘cooler’ than me… but a time came when we all realised we felt the same way and collectively decided ‘to hell with it’.

“I think the more other women see fellow females doing stuff in the scene then the more that will want to be involved,” says Jo Parnham, a Manchester-based promoter. “I am constantly inspired by women in the scene.”

Manchester has a thriving music scene, however the vast majority of promoters are men. In early May, up springs Garlic Bread Club: a new zine and gig promotion vehicle organised by Jo Parnham and Emz Banks. Both women have been actively involved in the DIY music for nearly a decade, but they’ve only recently decided to put on shows themselves.

“I wanted to give something back to a scene that has given so much,” says Jo Parnham. “I got the bug for putting on gigs through helping with TNSrecords and Manchester Punk Festival. I think it’s dead important for more women to get involved and, most importantly, I thought Garlic Bread deserved a festival in its namesake.”

Garlic Bread Club isn’t just a vehicle to promote shows, it’s a zine as well. “I’ve always found it really empowering putting out a zine,” says writer and promoter, Emz Banks. “Even in a scene as tolerant as DIY punk, it’s really easy to feel dismissed as a woman when most bands and promoters are men. Putting your words, ideas, opinions in print and putting it out into the world when you see women constantly shut down in life is so powerful. It’s a kick in the face to anyone who thinks we should keep quiet and that’s fully the essence of punk to me.”

The Garlic Bread Club launch party is due to take place on September 14th at the fabled Retro Bar in Manchester. They’ve got disbanded ska-punks Harijan headlining at their only gig outside of Manchester Punk Festival (so far), however they’ve also got Follow Your Dreams and Casual Nausea: two fiery hardcore punk acts with galvanising female vocalists.

“We think it’s so important that women are involved whether it be by being in a band, putting on gigs or writing about the scene,” Jo explains. “We want to help create a diverse scene where everyone feels comfortable.”

In some cases women have stepped up to the promotion mantle where their male counterparts have taken a break. Nice As Pie has recently been announced as this year’s replacement for Leeds’ annual Pie Race Festival. Pie Race organiser Ben Hannah chose to take a break after a decade of hosting the event and a collective of five women has sprung up to fill the gap. The team includes Ben’s fiance, Liz Wigley, who drums in Plot 32.

“[We want to] build on what Pie Race achieved, with a great atmosphere, great crowd, and an event to look forward to,” Liz explains, when asked the collective’s intentions for Nice As Pie. “It’s important for us to not do things exactly the same way as Pie Race though; we are different people with different motivations. It is a great opportunity to gather together to get more female promoters involved in the scene, and to use our experience in all sorts of different things. We are great friends and a great team, so it’s lots of fun!”

Nice As Pie will take place at Wharf Chambers in Leeds around November 8-9th; they’re due to announce their first bands this week. Unlike Hell Hath No Fury, which overtly only books acts with female, queer, non-binary or gender-fluid members, Nice As Pie are taking a more subtle approach.

Co-promoter Catherine Robins explains, “[Our aim is] to normalise female and non-binary people being on the stage. We are actively working to book acts with female and non binary representation without making that a key part of our marketing message.”

“It’s about being the best woman I can be, by being supportive of the diversity in the scene and giving people a safe space to gig and enjoy themselves,” says co-promoter, Sian Upfold. “I want to show that it should be normal and not a marketing tool, everyone deserves a place to be themselves.”

All of the women featured in this article have been involved in the music scene for most of their lives, but many haven’t chosen to start regularly putting on shows until recently. Why have they chosen to step up now?

“The timings just right,” says Cat Robins of Nice As Pie. “We’ve all individually been doing more in the DIY community, both within and outside of the punk scene. Sian and I organised a gig at a local skate park for Leeds Roller Derby last year; and some of us are in Plot 32, so we’re kind of primed for taking on the pie mantle! In terms of why this female collective has come together – we’re friends!”

2019 is unquestionably a more comfortable environment for women to work in, and I think the perceived normalcy of it is what’s inspired the change. There have always been womxn involved behind the scenes, but they’re finding their voices through a culture of support and celebrating successes.

Liz Wigley adds, “Plot 32 wouldn’t have started without a lot of people around us being encouraging, and it would be great if we could do the same for other people and bands who are just starting out.”

Holly from Hell Hath No Fury knows well that, although it’s a breeding ground for womxn promoters right now, there’s an institutional bias against womxn in the punk scene that needs work.

“There’s a lot of ingrained general issues […] the majority of punk promoters are inherently cis-male, they’ve built their base over decades and therefore they have deals with venues and they are the go-to for booking agents. It’s fucking hard work to book a big band or even get a look in.”

Booking bigger bands presents a great opportunity to book diverse support acts, giving them a boost up, as Holly explains: “A few [cis-male promoters] are beginning to do this on their own back. Promoters approach me asking for suggestions for suitable bands that aren’t all white cis dudes. As much as I hate being a human encyclopedia, it’s never a bad thing being able to suggest awesome AF bands that can get a cool support slot.”

There’s no harm in involving our male compatriots. Garlic Bread Club are working in collaboration with Andy Davies at TNS Records, and Nice As Pie are not doubt making using of Ben Hannah’s Pie Race expertise.

“I buddied up with Tree [of Anarchistic Undertones] this year for Hell Hath No Fury,” Holly says. He’s a been a major part of of the festival, contributing by booking the more intimidating bands, budgeting and being a supportive friend, making a step toward diversity in the scene.

The focus is often on making space for womxn on stage, in bands. Seeing increasing numbers of women starting bands is immeasurably encouraging: something few cis, het, white males will ever be able to understand. It’s hard to imagine that you can be something until you see it represented – seeing womxm represented on stage is essential planting the seeds for young womxn to start bands in the future.

The same is true to womxn taking on other roles in the scene: organising, promoting, writing, etc. In the North there is a strong and inspiring group of women supporting one another and encouraging new creative endeavours like zines, bands and collectives of promoters. Let us celebrate that.

One thought on “Girls To The Front: Female Promoters Revitalising UK Punk Rock”