Ben (ex-Paper Champ/The 4130s) shares a personal story of how fear and anxiety have hindered his enjoyment of punk rock. 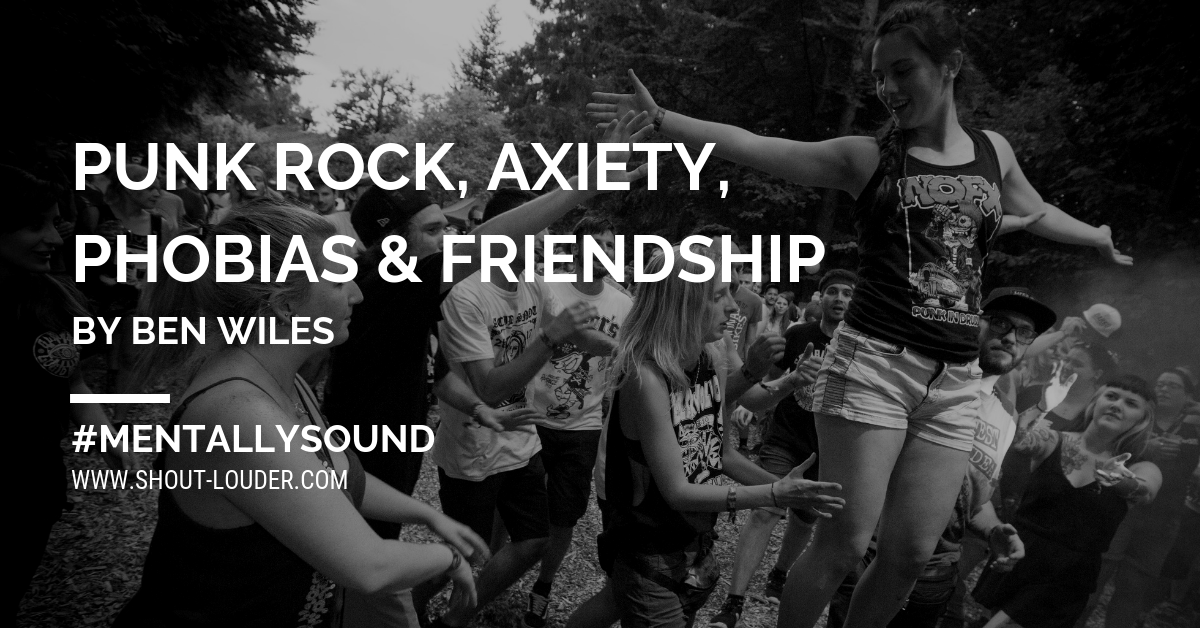 Guest post written by Ben Wiles, previously of Paper Champ & The 4130s. This is part of our #MentallySound series, discussing mental health in music.

Emetophobia is a fear of vomiting. I’ve been emetophobic for as far back as I can remember.  I have no idea of the origins of this phobia and, if you are reading this thinking, “Woah, that’s a strange one,” you’d be right.  I think the exact same thing; everyone throws up right?

Fuck – some people actively go out of their way to drink enough booze to puke every Friday.  Fair play to them.  I don’t drink.  It’s not my bag. Over the years not drinking has had a big impact on being in a band and, by extension, being in a gig setting.  I never wanted to be ‘that guy’ who was down on a party and stop my band mates enjoying themselves and getting wasted.  But it was getting harder and harder to be around drunk people.

It’s not that I’ve got a problem with my friends drinking, it’s that I associate drinking with vomiting. I feel the need to escape to a place where that’s not happening.  This is how I felt every at gig throughout the whole of my late teens and 20’s.  Sometimes I would get 50/70 panic attacks every gig I was at.  The only saving grace was being on stage.

I think many people will agree that being on stage is pretty much the best mask you can ever put on.  Being on stage is 30 minutes when you don’t have to be that beat down, fucked up, anxiety-filled wreck that you are in normal life.  It’s that reason and my love for punk rock that has kept me playing in bands.

Seven years ago my dad was given the news that he had aggressive lung cancer and brain tumours. He fought as hard as he could.  After a short battle cancer took my dad’s life. It was at his funeral I stood there and knew my own mind had two choices.

Choice one was live everyday as if it was my last.  Choice two was let my existing anxiety and phobic disorder manifest itself into something so big I could no longer control.  Unfortunately I succumbed to the latter.

Nothing was ever going to be the same again.  Now I had full blown health anxiety.  I’d go to the doctors twice a week with a new cancer I picked up and “deffo” had this time.  I would tell the doctor about the six heart attacks I’d definitely had that week.  Every time the doctor would say,

“Ben you are fine; we’ve checked you it’s all good…”

For the rest of the day I’d be on cloud nine, but the next day I would convince myself that the doctor had missed something: he only checked my heart, what if I have brain tumours and he’s missed them…

Throughout this period I continued to play in bands, although I had no fun at all.  I remember being on the bill for Rebellion Festival, which should have been one of the best moments of my life, but all I wanted to do was drive six hours home and not be at the event.

Musically I’ve died many times on stage and it’s cool that shit happens.  But now when I set up my gear all I can think about is actually fully dying on stage.  Actually dying.  This was not the most ideal prep for a show,  it was how my life was

After years of anxiety, I picked up depression, although I never admitted it. Instead I turned into a piece of shit. If you met me around 2011 – 2014 you’d probably agree.  To an extent it still remains nowadays, although I’m a lot more chilled out.  I can remember playing The Owl Sanctuary in Norwich and hanging out with great people. In my head I had decided that it would be my last night.  I couldn’t cope. I went home with plans to end this shit, but knowing I had a son on the way was the reason I never followed through.

I was always an advocate for saying the punk scene is full of shit and nobody is there for you.  But of course I’d say that, because I never told anyone what I was going through.  Instead I chose to alienate people.  I would use saying what I thought as an excuse for being a bit of a cunt.

I’m not sure attitudes towards mental health have massively changed in the punk rock scene. Everyone has always been understanding, but now more and more people are telling their stories.  The details of my own story are personal to me, but my story is not unique, especially among musicians.  I think I will always suffer with anxiety and, as I make steps to get better, I’m glad people are talking about struggles.  It is nice to know lots of people are rallying round to be there for each other in our scene.

I’m now in a place where I’m having fun in a band again.  I’m not trying to prove anything , I don’t care about good reviews or playing big gigs anymore.  I care about having fun in my hobby.  With really good friends.  In 2018 I’m looking forward to just being at gigs seeing friends again, and enjoying their bands.

This is part of our #MentallySound series, discussing mental health in music.