Alan caught up with frontman Alex to talk about keeping things positive, playing the old songs and teabagging. Not that type of teabagging, relax. 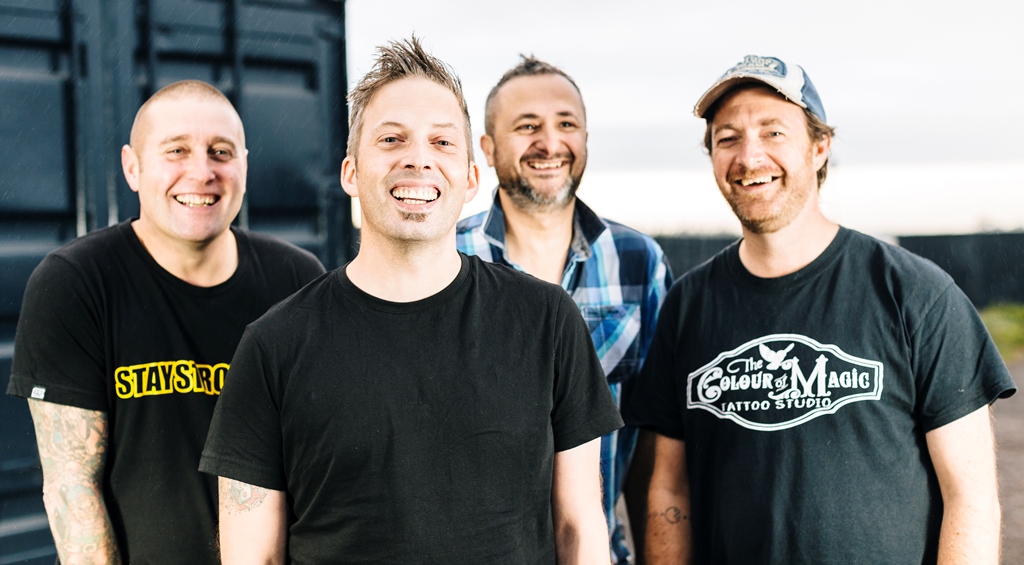 Almost twenty five years in the game and the ska-punkers with the square brackets, [spunge] are still going strong. Latest single Liar is a blend of catharsis and upbeat rhythms. We caught up with frontman Alex to talk about keeping things positive, playing the old songs and teabagging. Not that type of teabagging, relax.

Firstly, seeing as I was there, I have to say congrats on your headlining slot in Boomtown this past summer. What do you remember from that night?

Awesome – nice and muddy wasn’t it..? We had a blast. It was our first time at Boomtown and with so much going on we didn’t know what to expect but the place was stuffed full… and we had a blast, seriously enjoyed it and as we only played a few shows this year it was great to play live for sure. Definitely one we would like to revisit.

One of my memories is of teabags being thrown into the crowd..is this normal at your shows or do tea bags just become part of the life of a maturing band?

Not really, it was more that the only thing left on the rider at that time of night was the tea and coffee… if we’d have played earlier it may have been cheese and beer… who knows…

Apparently [spunge] have been a band longer than Post Malone has been a human, are there any particular moments that stick out over two plus decades of touring and recording?

We laughed – a lot. And still do. That’s what sticks out to me over the whole damn couple decades or so.

Judging from that night you seem to have a love/hate relationship with some of the older songs – I’m thinking of Kicking Pigeons mostly – is that fair?

Not really… we take the piss saying that Kicking Pigeons is our ‘Status Quo’ song… the one we always have to play. I can count on one hand the number of shows we haven’t played that song, and all of them were for technical problems like floors falling in or PA’s blowing up. Seriously though, live, there isn’t a song we hate, because of the vibe and the crowd… now when you are stood at practice in freezing temperatures and it’s next on the setlist to go through… maybe then it’s a love/hate thing.

P-Rock is a much celebrated channel amongst punk rockers of a certain vintage and we assumed anyone with videos on TV were rich and famous; do you care to confirm or shatter this illusion?

We’ve all got day jobs doing shit we would rather not be doing… so you tell me!

How intent were people on your lyrical content, in retrospect?

Quite a lot of reviewers seemed to give a shit that I wasn’t singing about something deeper… but the ones that really matter, the fans shouting them back at me at shows, they seem to be just fine with all of it.

What drives you guys to keep touring and creating new music?

We just love it, always have, always will… we actually surprise ourselves when we come out with new tunes that make us smile… again… after all this time – it’s a hell of a feeling and that’s what keeps us wanting to do more. We’ve had a couple of band sayings for years… ‘if you stop turning up, we will’… and ‘when it stops being fun, we stop’… and neither of them have come true – thankfully.

Brexit is hitting the fan at the time of this interview, and the world seems to be really politically charged right now. Does this atmosphere help or hinder a ska punk band in your experience?

We have always been about the fact that there is enough crap out there without adding to it with the stuff we do… so we stay clear of all that and just make sure that when you hear [spunge] you smile… we’re the ray of sunshine a lot of people need to escape.

Your newest single Liar instantly got stuck in my head, but after a couple listens what I really noticed the quality of the production.

We owe all that to the guy on the buttons, Elliot Vaughan, he’s done a hell of a job.

Ska punk can often be horribly recorded or horribly over-produced; did you have a sound in mind beforehand and do you guys have a hand in the production or recording?

We just do ‘us’ and we are lucky that he is not only a great producer but also knows the band’s music too. I think that really helped.

More new music is on the way; will it be in a similar vein as Liar?

Similar in the sense it is us… but I think Liar is the angry one out of the couple coming out this year.

Presuming the world doesn’t end; what have you got planned for the future?

Even if it does we intend to survive and tour the post-apocalyptic world Mad Max style. But, if it doesn’t, then we have a bunch more new music in the works that we will be releasing and we are already booking up shows and festivals for 2019, so basically more music and more touring… business as usual after nearly 25 years together… and still loving it.

Thanks a lot guys!

Appreciate it – and thank you to everyone that still listens to us and those that come out to watch this bunch of idiots bounce about on stage.

[spunge] have released two new singles: Liar and Get Out via their own label Dent’All Records. These singles are the band’s first new material since 2014’s ‘Hang On?’  – they were accompanied by a run of UK tour dates 2018.

Grab the new tunes direct from the band.