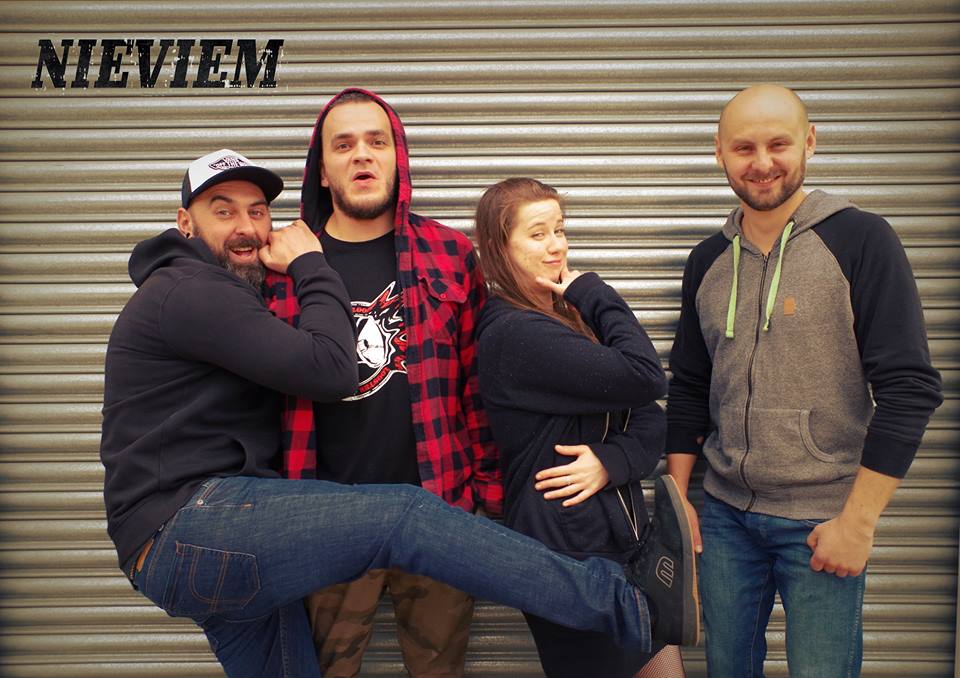 Fans of UK melodic hardcore should kee their eyes peeled for Nieviem. Having formed in Lincoln in 2016, they’re a reliatively new group that breathe life into 90’s-style melodic skatepunk with a does of heavier, nu metal influenced backline.

We spoked to guitarist Bart Stanczyk and vocalist Hope Bateman to learn more.

How would you sum up Nieviem for someone who’s just discovering you?

Hope: A Tony Hawk soundtrack, or as I think we’ve previously been described, think of Bad Religion with a lass on the mic.

Tell me a bit about how Nieviem came to be – how did you meet?

Bart: I met our previous drummer Tomek at work. As far as I remember we started jamming together in 2010. Few years later our bassist Kuba joined us but we still used to play covers just for fun. Nieviem were officially established when previous vocalist Vicky joined us in on April 2016. One year later she had to leave the band due to health issues, but thanks god we found Hope and we carry on until now together.

Hope: A mutual friend recommended the band to me as the previous singer’s position was becoming uncertain… and then later on I dragged Will into this mess after a band we had split and Nieviem needed a new drummer.

Were you involved in any other musical projects before?

Hope: I was in a few cover bands, then a blues rock type of band, and more recently an alternative rock band called Hellter-Skellter.

Bart: I was a drummer ages ago in noisy punk band in Poland. After 20 years of break, I’ve come back to drumming again and currently I play with South Holland Indecency Team from Boston too.

Where did the name Nieviem originate?

Bart: It’s been taken from two polish words “nie wiem” what means “I don’t know”. It’s been combined into one word and we’ve changed spelling for easier pronounciation which is still confusing!

What sort of bands did you obsess over as a teenager, and how do you think that’s affected your outlook on music now?

Bart: I use to grow up listening to the bands from underground scene, from folk, ska, skate to HC, anarcho, crust, grind punk. It would be hard name just one band. Polish punk scene was massive in 90’s, I would definitely point 1125, Schizma, Apatia, Post Regiment, Homomilitia, Guernica Y Luno. From other bands obviously Pennywise, Biohazard, Madball, Discharge, Disaffect, Nausea, Intensity, Resist, Oi Polloi, Disorder. I’ve never put much interest in main stream music, even these days. However I like early albums of Rise Against! But my heart is always on non commercial side of punk rock.

Hope: My childhood was filled with a good deal of pop punk so I think that is perhaps where my more melodic style of punk derives… as I grew older, my tastes expanded to all sorts that I can’t even be bothered to explain. But I think that variety is what defines my outlook on creating original music; it has to come to you naturally and it doesn’t matter if people think you aren’t talented at what you do, because if you’ve created something that resonates with a good portion of people then why take the negative comments to heart?

Bart: Definitely BigWig is my number one these days. I listen quite often to 88 Fingers Louie, No Contest and Bolshy though. If you ask about new releases, I was waiting for Pennywise album which came out earlier this year. To be honest, I put more interest in our local scene now: Truth Equals Treason released amazing album not long ago and I’m looking forward to Dyin Flies new EP. It’s on the way actually.

As woman who’s obsessed with melodic hardcore, I’m really excited to see more women in skate-punk bands. Do you think there’s anything we can do to encourage more women to get involved?

Hope: I mean, I do my best to encourage women in the punk scene at all but… I’ve not been that successful yet!

You’re based in Lincoln – what do you think is best about the local music scene there?

Hope: The people. It’s so easy to make friends who like the same music as you do and it doesn’t even feel so professional or formal as just networking when you give each other gigs.

Are you hoping to tour a lot with Nieviem? Where would you most like to travel to?

Hope: A tour would be sick… I’ll travel anywhere.

Bart: Oh hell yeah! Tour is something what we’re waiting for but I think we’re still quite young band, so we have to work hard, be patient and hopefully our time will come.

What do you most enjoy doing, when you’re not playing with Nieviem?

Bart: Drumming with S.H.I.T is good fun, so definitely I enjoy thas a lot.

Bart: We would like to play as many gigs as possible all over the country and finally go for a UK or Europe tour at some point.

Check out Nieviem on Bandcamp, Spotify or Facebook. They’re playing the following live dates before the end of the year:

Got to see @randomhanduk do their first show back yesterday and @undercoverfestival✋🕵️
NEW PODCAST 🎧 This is a round-up of the best new punk rock.
Old school podcast crew reunited! 🥳
NEW PODCAST 🚀 We talked politics and hardcore with Calvin from @grandcollapse.
I had a great time last weekend at Wotsit Called Fest 💀 Review incoming.
NEW INTERVIEW 🚐 We talked touring with Simon Walker from The SeaBin Podcast, Rash Decision and Monolithian.
Where did human pyramids first start? 🤸 A lot of people have asked me recently ...
What's your favourite low-budget music video? 🎥