South London’s Lay It On The Line deliver ferocious melodic hardcore. We spoke to vocalist, Alice, to learn more. 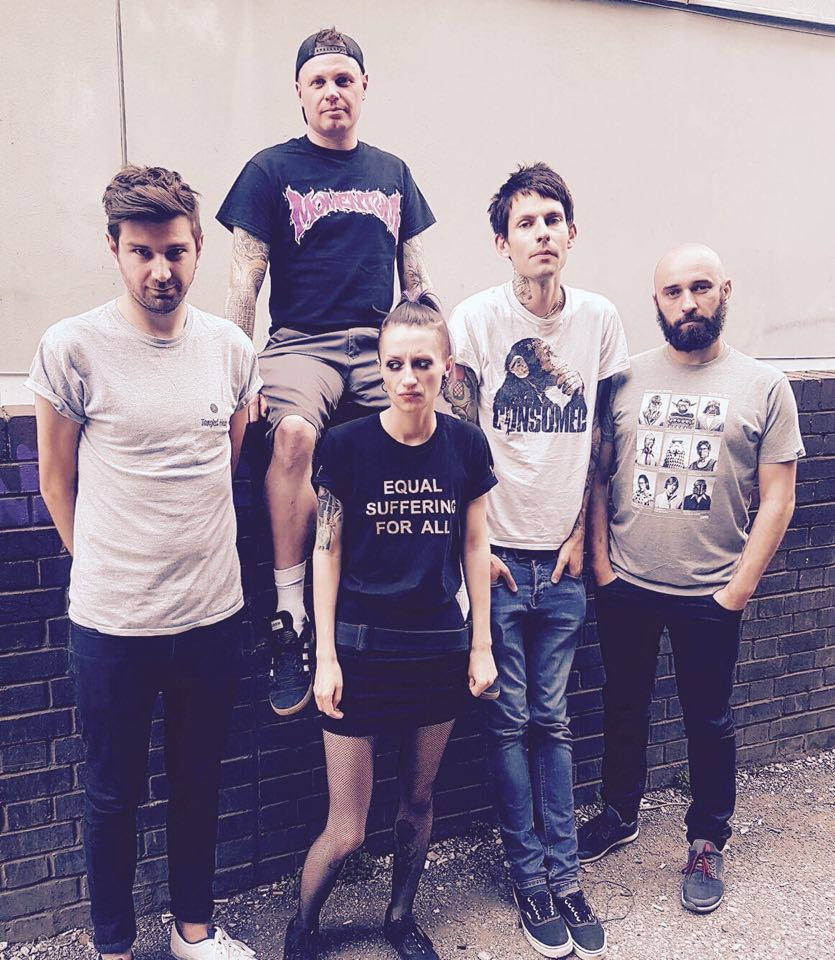 South London’s Lay It On The Line are a brutally fast melodic hardcore quintet, adhering to the popular double-time skate-punk template but twinning it with frenetic, furious anger and a unique combination of male and female vocals.

We spoke to vocalist Alice to learn more about this ferocious band.

Hey! We really enjoyed The Black Museum – it’s heavy as hell! How would you sum up Lay It On The Line for someone who’s just discovering you?

Pretty simply really, we’re fast melodic hardcore. I think every member of the band is a fast punk rock fan so we probably couldn’t play it much differently if we tried! Dual vocals between myself and Mike gives an extra edge to the sound as, whilst we both sing and scream, we do it quite differently.

There’s also a little sprinkling of the occult in there too – Mike is influenced quite a lot by the Process Church of the Final Judgement in his writing and this comes across in a lot of his lyrics, as well as a few song and release titles. The title The Black Museum itself is a direct reference to one of the writings from The Process that talks about how we are obsessed with day to day life and luxuries, forgetting that humanity does a lot of damage to the world.

For me, the thing that sets Lay It On The Line apart from other bands is the combination of your vocals – how did that first come about? Do you think it’s harder writing for two vocals parts?

Mike first asked me to do some guest vocals on some old tracks and it just worked. It was quite organic and when we wrote together for the album it was actually really easy – our ideas just seemed to fit together and in the case of the first track (Level Up), myself and Mike actually found that we’d written about similar experiences without even consulting each other first. Maybe it was just luck, but the whole process was remarkably easy – we’re both pretty open to the other’s ideas and not afraid to say when we don’t like something so it came together very quickly. We only finished the lyrics and arrangements in a few hours the night before we recorded!

You’ve also got a really engaging live presence. Is there anyone who inspired your performance style, or is it just how it naturally fell into place?

Performance is probably the biggest part of a live show for me. I get a bit mutinous at shows when bands come out and just stare at their shoes – my thing is that I want to give the kind of performance that I’d enjoy watching myself, and I love playing gigs and want that to come across.

One of the earliest gigs I ever played – it must have been about 2003 maybe? – my band at the time supported the Kings of Nuthin’. I remember being absolutely floored by the vocalist Torr Skoog’s stage presence – he didn’t even move that much and there were about 7 other people on stage playing just about every instrument you can think of – but he stared down every single member of the crowd with this kind of laser focus and no one could take their eyes off him. I remember thinking that was such a powerful thing – just direct eye contact with the people you’re performing to. Not a single person left the room whilst they were playing and I’ve used it at every show I’ve done since. He wasn’t the only one, but Torr was a very early influence on my live shows. I was sad to hear he’d died in 2013.

You’ve spoken really openly about difficult topics like addiction and bereavement in your lyrics. What events or topics did you find most inspirational when writing The Black Museum?

My lyrics on the album have drawn from personal experiences, but I can just as easily be influenced by current obsessions or whatever I’m reading at the moment. Whilst my Level Up verses focuses on my own experiences around drugs and drug use, I wrote Serious House after re-reading one of my favourite Batman comics and 120 Days is all about the Marquis de Sade’s 120 Days of Sodom. Mike wrote an EP about his murdered friend before I joined and a lot of the songs he writes are about death, both of animals and historical murder cases. I think he uses it to offload his frustrations.

Do you find writing and performing with Lay It On The Line somewhat cathartic?

Yes, definitely. My other band is political in focus and is a major outlet for all the directionless rage we can feel at the state of the world, but there’s a different kind of catharsis in writing about personal or emotional experiences.

I do also enjoy telling little fucked up stories in songs – so for instance Serious House tells the story of a doctor who suffers a psychotic break and cannibalises his murdered daughter. I think most of us like to tickle that dark part of our minds sometimes.

Are there any songs especially proud of?

120 Days. I read the Marquis de Sade’s 120 Days of Sodom a few years ago – it wasn’t necessarily an enjoyable read but it had a profound effect on me – it was written in 1785 and is still absolutely shocking even by today’s standards. I’d had the chorus line in my head for years, but it just didn’t really fit with my other band, but when I got down to writing lyrics for LIOTL it just worked.

Myself and Mike also shot a video for the song which I was really proud of – long before we shot it I had really clear ideas about how I wanted it to look and what kind of scenes I wanted to include. I included some of my favourite lines from the book in the song, as well as some horrible ones that really stayed with me and a few of my own invention. The book both repelled and fascinated me – it’s a very uncomfortable read at times and I really wanted that to come across in both the lyrics and the video.

Tell me a bit about how Lay It On The Line came to be – how did you meet?

There’s been a lot of lineup changes over the years but Mike’s always been the one consistent member – he formed the band in 2012 and I think there’s been about 14 members in total. In this latest incarnation, Duncan (bass) and James (drums) had been friends with Mike for years and I think Jakub (guitar) answered an ad for a guitarist on Gumtree! I’m the most recent addition to LIOTL so there’s an awful lot of history before me.

I met Mike at Rebellion Festival a few years ago and in 2016 he asked me to do some guest vocals on some tracks from A Prelude to the Process in a live session they were recording. I live about 200 miles north of the rest of the guys so I hadn’t really met them much before that. I remember being quite nervous but we all hit it off and splitting the vocals between me and Mike seemed to really work. Pretty much as soon as the live session was done Mike announced that we had a “new, settled line-up” so I guessed I was probably in the band!

When I was a kid I was all about David Bowie, and his gender-bending, performance-as-art style really attracted me. I used to be a bit of a goth as I was growing up so used to listen to mostly metal, particularly bands with women in them like Kittie and the Angela Gossow Arch Enemy years. It was only when I was about 17 that I got properly into punk, got listening to AFI, Amen, NOFX and started my own band. Then I heard Bad Religion and my love of melodic fast punk rock was sealed.

Do you invest time in any other creative projects outside of Lay It On The Line?

I’ve been the vocalist for northern hardcore band In Evil Hour for years now. We’re mostly influenced by American hardcore bands and the lyrics and videos are more socio-political in nature. Mike is in Phinius Gage too, who reformed after splitting up a few years ago.

The industry is such now that I think most bands get any delusions of grandeur beaten out of them pretty quickly. My focus in music has always been pretty simple – I like playing gigs. The performance aspect is something I really enjoy so as long as we get to play shows I’m good. We’re hoping to get out there on a few more tours over the next year or so, got another album developing as well. I’ve always felt that deadlines are a bit of an enemy to creativity though so like to keep things fluid – as long as we’re feeling inspired we’ll keep writing and performing.

Go listen to Lay It On The Line’s brilliant album The Black Museum, released through Disconnect Disconnect Records last year. You can find Lay It On The Line on Facebook, Bandcamp, Deezer and Spotify. We also strongly recommend checking out Alice’s other band In Evil Hour.