Guest article by Simon Widdop, a punk poet from Wakefield. Simon’s debut poetry collecton is Sending A Drunk Text Whilst Sober is available from simonwiddop.com.

Poetry ain’t dead, far from it. It’s alive and beating hard in books, at lit fests, on TV adverts and at gigs. Yeah, that’s right. But not to be cliche, the poetry you’ll find at shows isn’t the same as the stuff we were forced to recite in grey tones in GCSE English lessons.

But where does all this tie into the punk scene?

Let’s rewind to the initial explosion of punk. You’ve just entered the Mayflower Club in Manchester, waiting for The Buzzcocks when suddenly a matchstick legged, drain pipe jeans clad, backcomb rocking John Cooper Clarke takes to the stage. 20 minutes later (or shorter, depending how ‘Ramones’ he was feeling that night) you’ve just experienced the godfather of punk poetry. Fast delivery, sharpshooter word play and a right hook to the senses. At the same time, across the pond and in the belly of CBGB, Patti Smith was reciting her kitchen sink realism and strong feminist works to an audience of fellow New Yorkers at the height of the New York Scene.

Flash forward to 1982 and an anarcho-punk band by the name of Crass are blending spoken word performances with live music (as well more traditional hardcore and different visual mediums). The topics of Penny Rimbaud and Eve Libertine leaning heavier on the political landscape of Thatcher’s Britain, feminism and working class philosophy.

Over these past several years there has been an increase in the popularity of poetry and spoken word. From the above mentioned lit festivals and regular poetry nights across the UK and America (well to be fair, worldwide) to online journals and zines, to an uprising of indie publishers.

This is poetry that touches on topics such as mental health, politics, LQBTQ+ issues, identity and sometimes just a good old rant. Genuine people finding a voice and wanted to be counted amongst the smog of austerity and troubling times.

There is a beautiful parallel to the punk scene in that there is a strong sense of both DIY and comradery in the poetry scene, especially here in the UK due to the cuts that art funding has faced during the last two governments and the oncoming fallout of Brexit. You’ll hear and see poetry promoters setting up gig shares, ensuring that performers are paid in some capacity and even offering a settee to crash on. There is also active sharing of events and submission windows across social media and good old fashioned word of mouth. 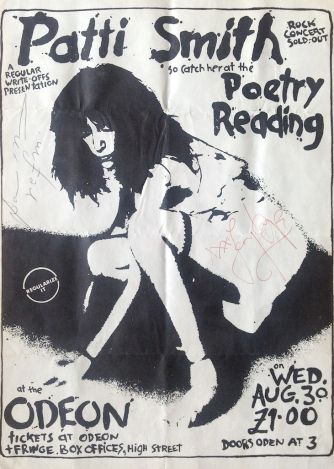 At the same time, we are starting to see our two worlds collide at a good selection of music festivals, such as Rebellion, Manchester Punk Festival, 0161 Festival, Long Division and Oxjam. Sometimes this has entailed a stage dedicated to spoken word and other times, having poets go up between bands. To the promoters and the festival directors, I ask that you take a look into your local poetry scene and see the talent that is waiting for you there. We are ready to stand with our band-based cousins on stage and share our words and philosophies with the crowds. We share the hardships and the passions that you do in these uncertain times (plus we are easy to accommodate, just pass us the microphone and we are ready to go).

So, that night you are at a gig and a poet takes to the stage, you might be thinking, “Well I’ll just nip to the bar while they ramble on,” but I say just hang on those few minutes whilst someone is on that stage, baring their words down into the microphone and out onto the audience. You might just hear something that twinges a little thing inside you to make you go, “Yeah… I know what you mean,” or, “Fuck, that’s how I feel.”

Like that legendary night the Sex Pistols took to the stage Lesser Free Trade, you too might walk away ready to put pen to paper and speak your truth.

To put a twist on a quote by Joe Strummer, poetry might not change your world, but it can change your perspective on the world.

Guest article by Simon Widdop, a punk poet from Wakefield, West Yorkshire. Simon’s debut poetry collection Sending A Drunk Text Whilst Sober was released in April 2018 on Plastic Brain Press. He also has been published in print in the New River Press Yearbook 2017/18, Paper And Ink Zine, Glove Zine, We Shall Overcome: The Anthology and Nymphs & Thugs Soapbox as well as online at DryLandLit Press, Estorica Magazine and Wildsound Festival (USA).

Simon will be performing at a selection of punk festivals in 2019 as well as regular events throughout the year. Keep up with him simonwiddop.com.