N.B.: I’d intended for this to be a happy article about how and why I enjoy live music so much, but it’s turned out a bit on the dark side. Oops. Trigger warning: Depression, suicide, bereavement. 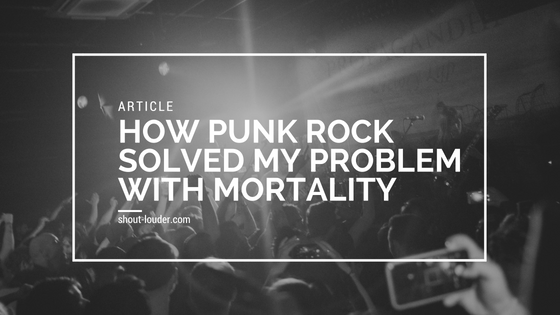 I’ve been going to a lot of gigs lately. In the last month alone, I figured out I’ve travelled over 3,500 miles just to see bands. As I’ve started booking in festivals later in the year, more people are asking me why I’m doing it.

Typically it is a question I get from the ‘normal’ people I work with or my long-suffering family, however lately it’s a question I’ve received from people in the scene, usually accompanied by an incredulous look because I’ve just turned up in yet another city.

I’ve got an answer for you, but it might not be the one you’re expecting.

Why do I go to so many gigs? I go because I know I’m going to die. I’ve become hyper aware of my own mortality.

I can feel the time slipping through my fingers, and enjoying the music I love is my way of remedying and recognising that. Every show I go to, whether that’s a sweaty Propagandhi pit, a crusty post-hardcore melee or a gentle acoustic folk gig, I will have a massive grin plastered to my face. I’m enjoying the noise, the adventure and spending time in the punk community, because I feel like it could end at any second.

They’re all right, of course, I probably ‘should’ do all of those things. I’m fucking tired. I’ve got tinnitus. I get stressed trying to keep track of all the gig-dates on my mental calendar. I struggle to motivate myself to do my day job because it’s so different to my ‘other life’. I’ve given myself alcohol poisoning more times than I can count. I’m running solely on caffeine and enthusiasm. Getting out of bed to be at the airport at 5am when I’ve still got the flu from last weekend’s festival is a hellish struggle.

It is worth it, because I am happy. Right now, I am happier than I have ever been. And I have been for a long time now. I haven’t felt the tug of depression and the cold sweat of anxiety has washed straight off me. I’ll say it again: I am really fucking happy.

When the idea that things might end is so firmly lodged in your head, whether that’s from an awareness of people around you dying, or from a long-buried urge to leave this world, life begins to feel very short. In the past few years I’ve come face-to-face with a lot of death and self-destructive behavior, which seems fairly common for anyone over 25. Each event would be minor on its own but, in combination, they’ve had a profound effect on my life outlook.

The first was one of my colleagues: she was diagnosed with a rare form of skin cancer and passed away four months after her diagnosis. She was one day younger than me. She lived a much healthier lifestyle, ate well, exercised, didn’t smoke or drink. In addition, I lost a handful of friends to car accidents, suicides and other unexpected events. I worked for a year at a hospice and met scores of patients who were bravely facing up to a looming deadline.

All of this combined to make me realise that I could easily die in the next few years, despite being relatively young.

The ‘fuck it’ approach to life isn’t a new one for me. When I was at university a decade ago, I slipped under a blanket of depression so deep and all-encompassing that I was seriously contemplating taking my own life. I wound up dropping out, and flipping my life around. I don’t feel that way now, but once you reach that cavernous, lonely place in your head, it’s a feeling that you will always live with. A bad hangover can bring with it intrusive, self-destructive thoughts. Things don’t even need to be going badly; Derrick Johnston wrote a brilliant article last year about how an urge to jump off a boat came to him in a moment of ‘pristine calm’. Once the idea is there, it never truly goes away.

I started to feel the tug of depression at the edges of my mind again in the last couple of years. It got stronger and stronger, but I know from experience that one thing that will always rescue me from that mindset is live music. I can be in the worst mood in the world, but a gig has never failed to pull me out of it.

I tried all the things ‘they’ recommend: exercise, meditation, yoga, healthy eating, curbing my drinking and smoking, inventing hobbies as a distraction. All of them worked to an extent, but it was still there, that cloud waiting to rain on all my thoughts. I started to remember my earlier point: live music has never failed to make me happy. Instead of following the healthy path, I made a deliberate choice to go to as many shows as I can, because I know that they will ultimately bring me joy.

My lifestyle might kill me, or I might be sitting in a nursing home in 50 years time telling people about the brilliant time I had. I don’t care if I die in 5 months, 5 years or 50. I know that I’ll be happy with the way things have turned out. I won’t regret the things I haven’t done.

Whichever way I frame it, that’s ultimately why I go to all the gigs that I do. It’s why my friends will see me pop up in Austria or Belgium or London or Leeds. Live music makes me happier than any other form of self-help in this world.

Life feels shorter than ever, so I’m going to fill it with the noises I love.

Article by Sarah Williams. Explore our #MentallySound series for more articles about mental health in music.

2 thoughts on “How Punk Rock Solved My Problem With Mortality”