The sun’s out, the beer’s flowing and I can hear the echoes of a band sound-checking somewhere over the thrum of conversation. All my friends are here, I’m afternoon-sozzled and teetering perilously close to evening-wasted, ready to do something dumb that I won’t hear the end of for weeks to come. It must be festival season.

I live for this. Warm weekends wasted in sweltering venues; stumbling out into the cool late-night air in a sweat-soaked t-shirt; watching band after band and loving every second of it. Summer of 2018 is loaded with punk festivals, with increasingly more DIY events popping up around the country. It’s beautiful to see so many more people getting involved and organising their own weekenders: booking a gig is stressful enough, let alone a whole festival. The scene is thriving.

These are our lovingly curated top picks of UK DIY festivals taking place this summer.

One of our top picks of last year’s festivals, we are pleased to see it growing even bigger this year. Music will be starting earlier on Friday and they have added a film-night on Thursday and an acoustic hangover session on Sunday afternoon. Music on the Friday and Saturday remain the main attraction of the festival, with this year’s main draws taking the form of a handful of TNS bands, including Wonk Unit, Faintest Idea, Matilda’s Scoundrels, Casual Nausea and Revenge of The Psychotronic Man.

The latest announcement from Wotsit Called includes the full music line-up for Friday and Saturday, featuring some really big names. Ska-punk stalwarts Inner Terrestrials will never fail to get a room skanking, and feisty Scottish punks The Murderburgers are reliably riotous. Recently announced are Skinny Milk, Punka, Haest, who will be joining The Barracks, Butane Regulators, Plot 32, The Mentstrual Cramps and Batwolf.

The other advantage of this festival is that it’s right on the beach and, although it doesn’t take place until late September, we’re British so we can handle a bit of cold, rainy sea action. If you’re not too hungover there’s also time to enjoy the arcades and quaint shops of Hastings, plus delightful coffee and vegan grilled cheese at Sham City Roasters. This southern gem of a festival is organised by a collective including members of Matilda’s Scoundrels, The Barracks and The Dead Anyways. It’s small, DIY to the core and definitely worth a trip to the South Coast.

Cromstock is a brand new all-dayer taking place in Brighton that represents a fresh direction for underground thrash, metal and punk in the UK. This event will appeal to punks who came to the scene from a love of metal, tech or hard-rock… or anyone who used to go to Download before their bookings went downhill.

If you’ve seen prog-thrash-metal melee Almeida before, you’ll know that a) they’re exceptionaly talented and enthralling live and b) they stick out like a sore thumb on most punk line-ups because they can’t be pigeonholed into one genre. Well, they’ve taken matters into their own hands and curated this collision of punk and metal all in one bill.

DIY scenesters will be familiar with Manchester’s premium metallic hardcore export, Fair Do’s, who are gearing up to release a much-anticipated new record later this year. You’ve also got melodic hardcore masters Darko holding up the side for shredded vocal chords and dual-guitar frissons. Recently-reformed TNS Records favourites Beat The Red Light will be bringing their genre-defying explosion of black metal and ska-punk for a rare live outing. You can also see catchy skate-punks Dead Neck and techy, melodic Shout Louder faves Sombulance earlier in the day.

You might be less familiar with A Night In The Abyss, described as ‘atmospheric tech death’ (I hope that’s a prophecy of where my life’s heading…), or Core of IO, who hit hard technical, melodic death metal. You can also enjoy virtuoso progressive metal from Dust of Nations and Dream Theatre-equse prog metallers Novena.

This is a one-off opportunity to catch some of your favourite bands and discover some new ones, from a genre that will really compliment them. This is seriously thrilling: do not miss it.

Now in its second year, Level Up festival is the biggest and best ska-punk festival in the country. It takes place over three days at the New Cross Inn, which boasts a hostel upstairs, making it easy to stay over (although we can’t guarantee no one will be wanking in the next bunk). Organised by a collective of three promoters (London’s Be Sharp, Fishlock from Bristol and Belgium’s El Topo) the line-up runs the full gamut of ska-punk sub-genres.

At the top of the bill are two seriously exciting reunion shows from ska-punk heroes Lightyear and Random Hand, plus Dave Hillyard & The Rocksteady 7 headlining on Friday. Everyone’s buzzing about getting to see Call Me Malcolm, having recently released the best ska-punk album of the decade in the form of I Was Broken When You Got Here (review here). Big highlights also come in the form of Faintest Idea, The Toasters, Jakes & The Jellyfish, The Hostiles, King Punch, Counting Coins, The Pisdicables, Just Say Nay, Atterkop, Millie Manders and Filthy Militia, to name a few.

It’s a pleasure to see so many fantastic weekend events popping up at New Cross Inn, which is building a reputation as one of the best venues in the UK. They’ll even have acoustic sessions downstairs in the recently-added Stocks bar, to bring even more to an already jam-packed weekend. 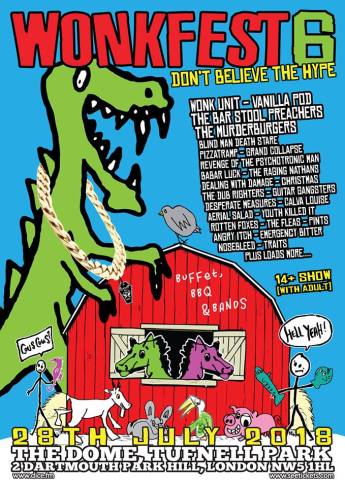 London’s biggest DIY festival is such a pure punk pals-fest that it’s entirely unmissable. Do believe the hype!

Get your running shoes on to dash between 20 minute back-to-back blasts in the Boston Arms and The Dome – two venues linked by a staircase and a smoking area. Restricted set times mean that the organisers can absolutely stack the line-up with tasty bands and there is zero possibility of getting bored. It’s a flawless plan if you’ve got the stamina to keep up with it, however if you need a quick break you’ll find everyone crammed into the tiny patch of sunshine in the smoking area or hovering like gannets around the legendary Wonk Buffet (vegan scotch eggs, anyone?).

Beyond the bands, this is a festival with an extremely strong ethical stance. Despite high venue-hire costs at The Dome, plus the plethora of brilliant acts, the organisers always make every effort to charge you the lowest possible ticket price – they clearly want to ensure that the event is accessible to everyone. Make sure you bring some provisions for the food bank collection, which rakes in heaps every year. 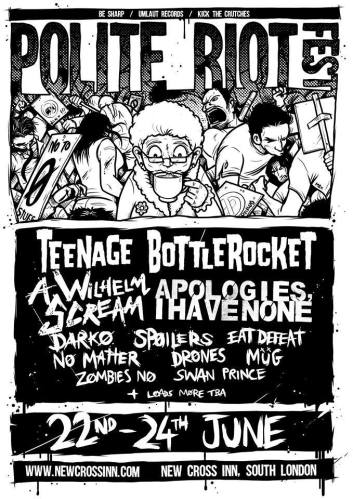 A brand new 3-day weekender at London’s New Cross Inn, boasting major headliners Teenage Bottlerocket, A Wilhelm Scream and Apologies, I Have None. You won’t encounter a single dull moment with this genre-diverse line-up, however if you’re only able to make it for a day, choose wisely.

My top day will be Sunday, which sees a high-calibre bill full of fast, techy, hard-rocking punk to enjoy in the form of bands like Darko, Drones and Zombies No. Friday will be the top choice for lovers of pop-punk and good times. Joining power-punk heroes Teenage Bottlerocket are Spoilers (fresh off an international tour with Face to Face), Eat Defeat (poised to release The Pop Punk Album Of The Year in August – catch them now before they explode), Irish pop-punks No Matter and newbies Swan Prince, who are significantly better than their name suggests.

Saturday offers a brilliant showcase of melodic punk rock bands with Apologies, I Have None at the top of the bill. So far we know that this will be one of your few opportunities to catch skate-punk lovelies Mug this year, however the promoters are still dotting ‘i’s and crossing ‘t’s before they make their final big announcement. I’ve had a sneak peak at the bill and I can assure you it’s a brilliant combination of old favourites and explosive new talent – they’re just waiting on final sign-off before they spill the beans.

If you’re thinking of making a weekend of it, there are plenty of hostels and Air BnB options as long as you book early. I also recommend grabbing breakfast from The Full Nelson: an awesome vegan junk food bar 10 minutes down the road in Deptford.

While Boomtown is not by any means an ‘underground’ festival, we have included it on the basis that a) it’s has a lot of DIY bands playing and b) the punk stage is hosted by Last Gang In Town who are definitely a DIY collective. Is has the single most impressive punk line-up I have seen this year.

The line-up for Boomtown is always brilliant, but Last Gang have out-done themselves this year. Every single one of your favourite bands from the UK punk scene will be playing this festival. It’s like they’ve looked at every single group they could book and just said, “Fuck it, let’s book them all.” They’ve also moved away from the traditional Devil Kicks Dancehall towards the new Hangar 161 in new district Disorder Alley, where you can enjoy the likes of Voodoo Glow Skulls, Capdown, Jaya The Cat, Random Hand, The Filaments, Wonk Unit, Nosebleed, Beat The Red Light, Roughneck Riot, Grand Collapse, Dream Nails, Revenge, Pizzatramp and heaps more.

Going to Boomtown also means you get to enjoy the bigger acts on the main stage, plus the incredibly diverse range of other genres across the different districts. All the while, you’ll be ensconced in the surreal theatrical settings – stage designers work hard to ensure that you will feel like you’re in the Wild West, Chinatown, an abandoned industrial hangar or worshipping at an Aztec palace, rather than stood in a muddy field near Winchester. It’s like the Crystal Maze with more ketamine and less cryptic clues.