Have you ever been to Cornwall? I live pretty close to the border between Devon and Cornwall and go there pretty often because… Well… It’s like going to a foreign country without actually having to go to a foreign country! The middle bit of the county has been filled with nothingness with all activity taking place round the spectacular coastline. Maybe it’s the sea air, maybe it’s the surf culture that’s grown up around the county or maybe it’s the Cornish insistence that they are a nation in their own right that’s led them to adopt a different pace of life to the rest of Britain. Cornwall moves slower than anywhere else in the country… more relaxed and laissez faire. Almost like a county of stoners weaned on cider, pasties and putting jam and cream on scones the wrong way round. All this makes this new release from Rash Decision seem all the more incongruous as they deliver a pissed off, vicious slab of breakneck hardcore thrash that sits at odds with their surroundings.

Karoshi amounts to 14 tracks of kinetic, angry metal/punk crossover that, to my jaded ears, harks back to the New York hardcore of 80’s bands such as Agnostic Front, Cro-Mags, Leeway, The Crumbsuckers… etc. The guitars are violent scythes of noisy crunch, drums rattle along with plenty of double kick action and the vocals are throaty, larynx stripping rants. All bar three songs come in under two minutes and say as much as most songs far longer, being rammed to the rafters with riff after riff and breakdowns aplenty.

The angry intensity spills over fully into the lyrics. Lyrically, if these songs were to paint a picture of life in Cornwall then the county’s tourist industry would be fucked in an instant. This is definitely not a child friendly album as the band spit out profanity after profanity and cover pretty much every taboo word going… and I’m the kind of cunt that fucking loves shit like that! In all seriousness though, like many punk bands before them, Rash Decision cover much of the usual punk rock subject matter… Being slaves to the system on Salary Man and just generally getting fucked over by life. The thing is, these subjects never go away and will provide abundant subject matter for punk bands for eternity.

Engineer Adam Chinner has managed to get the band a lovely, tight 80’s thrash style production with clicky drums and some fantastic thick guitar tones. Frank Bello of Anthrax would positively drool over the chunky bass tone. All of this was achieved in the unlikely locale of St Just: a village of about 20 houses! The locals must have been blissfully unaware of the hateful vibes being spewed out in their midst.

Cornwall is a difficult county to escape; literally, the A38 and A30 are prone to traffic jams and there is no such thing as a motorway in the whole county! There is also very little infrastructure for rock and roll. There are venues but for the most part these are just pubs who will let bands use the space to put on gigs as opposed to a strong network of promoters and fully equipped venues, and certainly not punk rock. There are, however, many people with the heart and spirit to make things happen and it’s this heart and spirit that has been driving punk rock for the last 40 years. Rash Decision are overflowing with this spirit in every fibre of their being through their music, their lyrics and their drive to push beyond the West Country and take their music to an international stage, which they have been doing with some success for several years now. Rash Decision are a punk rock success story, not because they’ve become household names or anything like that, but because they continue to follow their vision and pursue it with dogged tenacity to create vicious, barbed little punk rock gems like Karoshi. I’ve listened to it twice whilst writing this review and I may well give it third spin…you’ll find yourself doing the same!

Save the band some Bandcamp fees by purchasing a copy of the physcial of Karoshi direct from them – just email www(dot)rashdecision(dot)bigcartel(dot)com. You can still listen and download the album from Rash Decision’s Bandcamp page, and check out their Facebook page for updates. They’re often around in the UK, and they’ve got a sick Euro tour lined up: 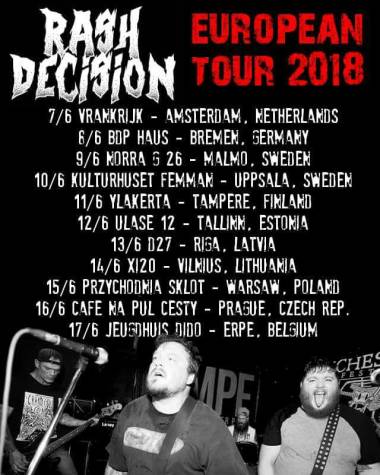