I’ve just walked out of a Random Hand gig drenched in sweat and spilled beer, having shouted my lungs hoarse and skanked non-stop for 45 minutes. It’s like 2013 all over again.

I can’t recall dancing quite so enthusiastically for a ska band since Random Hand went on hiatus in 2015; there are very few bands who give 110% live the way that they do at every single show. Tonight’s gig at the Key Club in their local city of Leeds is a special return to form ahead of a handful of festival shows this summer.

Sounds Of Swami open the show, beginning with a slow, quiet section with just a bit of guitar and a gentle vocal. It’s the calm before the storm that they tear into late into the song. From Random Hand’s hometown of Keighley, they lend the show the vibe of a party with all your friends. They served as late replacements for Jesus & His Judgemental Father, but I’m much more excited to catch them, having gotten deeply into their album Furniture for Modern Living last year.

This humble four-piece are at the forefront of current post-hardcore, channelling bands like Sonic Youth and Fugazi in their own expert DIY fashion. They create a really gripping soundscape sweeps you up, lulls, then hurls you around the room. It’s lush, complex composition that’s interesting on record but utterly captivating live. There is an overwhelming amount of skill in this band that’s enabled them to be inventive and experimental with their sound. It also allows them to look totally at home with themselves on stage, producing a depth of sound that you wouldn’t think possible with just four instruments. They look like they’re having a great time doing it.

Mr Shiraz immediately encourage us to get sexy for a Random Hand on this special Tuesday night. Another band from the old school a Random Hand family (in fact, I’ve only ever seen them once without Random Hand), Mr Shiraz aren’t really active these days and, therefore, the audience are delighted to see them. They treat us to upbeat songs on a diverse range of 90s-era topics, including Friends and Patrick Swayze. They’re strongly alt rock with a dose of swagger and a groovy, nostalgic vibe, exactly what you’re looking for on a night like this. 21 Grams is is saved for the end of their set, hitting an appeal that’s somewhere between Vanilla Pod and Uncle Cracker.

The playlist between bands serves to get me rared up for some serious ska-punk revival: King Prawn, Capdown, Adequate 7, Mighty Mighty Bosstones. I still get excited to hear the siren from the start of Anthropology in the soundcheck; it instantly gets my bloodsugar up and ready for a dance. Before they even start it looks like it’s going to go mental, just like every show I’ve ever seen them play. There’s a lot of beardy dudes standing alone at the front looking antsy, patiently waiting to throw some elbows. I’m having flashbacks to getting crushed at their final show at the Camden Underworld and planning an exit strategy.

Random Hand don’t give off the impression of a band who’ve been off stage for over two years. They sound like the well-versed, constant tourers that they once were, although Robin jokes about needing a bit of extra time to catch his breath between tunes. They are as comfortable as ever on stage, slipping straight back into the easy presence of friends who’ve played together hundreds of times.

Their set is a ride through all four of their albums, but I’m probably most excited to hear the newer tunes getting their first proper outing. They released Hit Reset just as they stepped off-stage at their ‘final’ show at the Camden Underworld after playing what was effectively a greatest hits tour so, apart from a ‘secret’ set at Boomtown and one other gig, the new songs haven’t been played live. 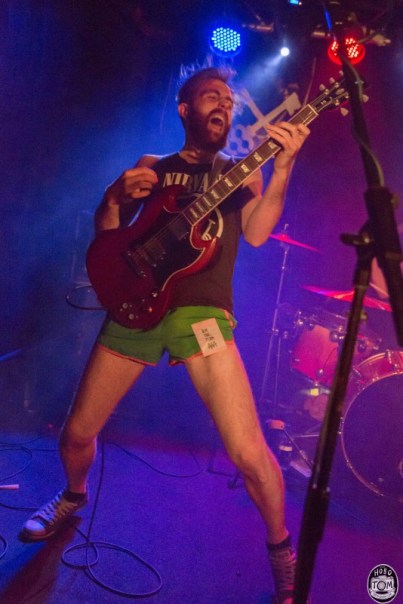 Pack It Up gets a massive chant of, “Fuck this shit, we’re doing it our way,” that’s incredibly fun. It is almost as incendiary as the Scum Triumphant chorus, but nothing will ever beat that. Robin’s top is off by the time they’ve played three songs and the steam is visibly rising from the crowd. The sweat starts dripping from the piping above the stage during After The Alarm. On Not A Number you can hear the audience chanting the horn line even above the volume of the PA, then they jump straight into Play Some Ska and Devil’s Little Guinea Pig. It’s back to back hits all night. During the last song, Robin crowdsurfs to the merch table and back, dedicating the encore to anyone who he accidentally kicked in the head.

As always, Robin Leitch’s banter is one of the highlights of the set. He admits angrily that his choice many years ago to jump around, shout political nonsense and blow into a tooty brass thing was a stupid idea, however I’m grateful for his questionable life choices. A Yorkshire/You’re Shit chant ripples through the regionally patriotic crowd, to which Robin suggests we all fuck off the gig and go for a big roast dinner instead.

He makes a big point of thanking the fans for all their ongoing support over the years, in a sweeping, heartwarming statement. No one’s more grateful for return than me right now; they’ve not lost a hint of their energy.

It’s a real pleasure to see them back. Long live Random Hand.

Enjoyed this? Why not check out the interview we did with Random Hand too?