Scottish/Belgian melodic hardcore newbies The Affect Heuristic are the most exciting thing to happen so far in 2018. 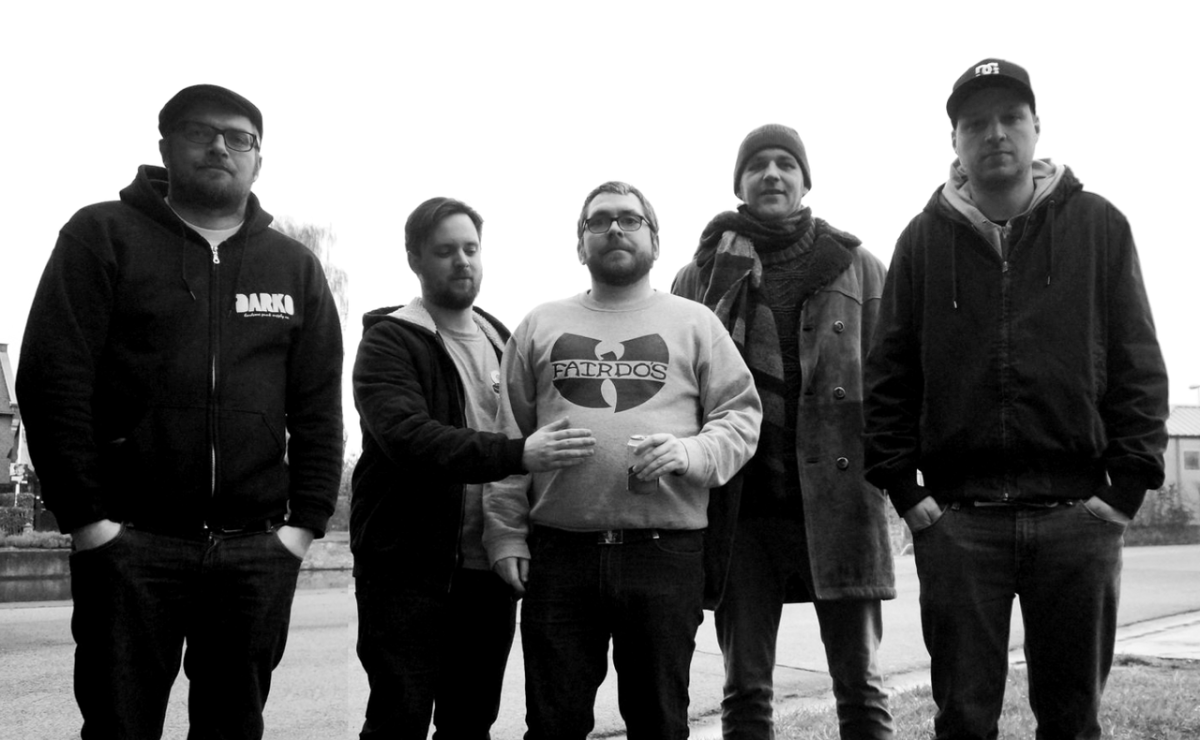 The Affect Heuristic are one of the single most exciting things to happen so far in 2018. They teased a short burst of Tightrope last year, before releasing an absolutely stunning split with Money Left To Burn in February. This is a record that deserves to be spun to breaking point; we’ve had it on non-stop since we got our hands on it.

Shout Louder aired an exclusive stream of Vs because we think it’s the most exciting record we’ve heard all year. It’s now out in a gorgeous digipack format on Lockjaw Records. If you haven’t heard it yet, you need it in your life. It’s intricate, technical melodic hardcore with a sweet twist of metal, erring more on the side of Shai Hulud or Between The Buried and Me, but maintaining all the wider appeal of Darko or F.O.D.. It’s also worth mentioning that it’s been mixed by PMX’s John Harcus, so the end product is tight as fuck.

Conveniently, Shout Louder’s writer and Less Talk More Records’ lovely Joelle happens to live with The Affect Heuristic’s guitarist Dave Gourlay, so he was easy to pin down for an interview.

Hello. I know you quite well but maybe our readers don’t. Can you introduce yourself? Who are you, what is your role in the band?

I’d like to just kick this off by saying it’s a real honour to be doing this. I bloody LOVE Shout Louder and what you’re all doing for punk and music in general. Podcasts are a tour de force of relevance, bizarre ranting and comedy. (All credit to Sarah!)

Now, to business. Hiya, I’m Dave, I play guitar and awkwardly fumble with any dates we’re given to the point of utter confusion of everyone else in the band.

Oooh! Thanks so much for the enjoyment of the finished record! Glad you’re digging it after hearing it ad nauseum while I wrote it in our flat.

The fact that I still enjoy it after having to sit through it a million times shows how brilliant it is. I rather enjoyed watching it come to life.

Seriously surprised at that.

I’m more excited about the launch of the hot sauce than anything else. Bernie Bumhole is an aptly named winner. It actually dissolves toilets. First time I had it, I left teeth marks in the sink. If you didn’t pre-order it, you’ll have to wait to try it.

I’ve heard it numbs buttholes to the point where you can’t tell if you’re farting or not. Risky business that.

Every fart’s a gamble. It’s sneaky cause it can be a slow burner. It definitely isn’t slow the next day.

Yes, I’ve seen your face change and run for the bathroom a few times…

Apart from that time I sharted on the chair.

May it rest in peace in the tip.

Now let me ask the obvious questions first. You and the singer (Sean) are from Scotland. You’ve lived in Belgium for a few years and you’re about to move back to the UK. The rest of the band is Belgian. How does that work? How do you write songs or rehearse?

So far as writing and rehearsing goes, I’ll have to really knuckle down and start demoing more. I absolutely hate that stage of writing cause I can’t play it tight yet and hearing all those duff notes drives me mental. But this is going to be key.

I absolutely love those spontaneous moments we have in the room together where I have an idea and by the end of practice, we have a song (in this case, Tightrope). But this is a double edged sword, since I can sit down with Sean and involve him waaaay more while maintaining a regular actual practice schedule with the band back in Belgium.

So we’ll demo everything, do our homework and hopefully by tour time, it’ll all be sorted. They’re incredible boys, they never disappoint.

So you’ll be going back and forth to rehearse?

As much as I can. Ideally I’d like to get over twice a month. Or once a month but a full weekend of rehearsals. Practice is everything.

You are the main songwriter, correct? What is your writing process like?

Incorrect! I usually come up with a cool little lead riff and maybe a few other parts, we go over it in the room til we’re all happy. Or I write stuff I can’t play in Guitar Pro and pitch it to the band. Guitar Pro is both an amazing song writing tool and a curse (give me free stuff Guitar Pro).

Those bloody midi tracks… Very enjoyable.
Who have been your main influences as a songwriter? Who do you look up to?

I love guitarists like Billy Corgan, Erik Mongrain, Noel Gallagher, James Dean Bradfield, Graham Coxon but the guy that really kicked it all off for me was Matt Fox. I saw Shai Hulud for the first time and I was just glued to his hands. No-one on the planet can mix aggression and melody like he can. He really got me started on the through-composed, endless riffing, weird chords thing. (Note: check out Shai Hulud Food Puns on Facebook)

I also worship Paul Waggoner of Between the Buried and Me and Ben Weinman of The Dillinger Escape Plan. I have many guitar heroes but we’ll keep it PG for now. The only real, ‘punk’ guitarists I’ve ever truly worshipped have been Jake Kiley and Jackson Mould.

What type of music do you listen to when writing? Does it differ?

Anything but punk of any kind. Mainly techy/metal bands like Animals As Leaders, The Helix Nebula, Within The Ruins, (old) Veil of Maya, Black Dahlia Murder, etc. I also love all the pop music. J-Pop, old school rap, grime and that. I am fully down wit da yoof. Notable mentions go to Save Us from The Archon and CHON.

Sean would be the best person to answer this since he wrote those lyrics but I can definitely relate. Toxic masculinity on the whole is just another part of the bullshit patriarchal society that should be dying out.

The idea that we’re so near the technological singularity and I can get pizza from a train station vending machine 24hrs a day but we still have gender inequity is a wholly archaic notion along with DVDs, shoes with wheels in or getting slapped for crying at a film and called a ‘poof’ (has never put me off The Outsiders or Stand By Me). It’s fucking laughable. Examples of this are everywhere and we can only do our best to be better and to do better. Writing songs about it is a definite start.

How has music affected your own mental health?

I’ve been pretty up and down lately. I suffer from depression and anxiety and this band has been a massive help in controlling my loud brain. There’s a real catharsis in playing/writing music. It gives me something to focus on and control when everything else around me seems to spiralling into oblivion.

If it wasn’t for music, I probably would’ve hurt myself a long time ago. Which isn’t good.
But it comes with its hazards. I get the worst post-show/tour blues. I hit a really rough patch especially after tours, particularly when I was trapped in that dead end job. Mind that? Carpets and the people who clean them are shit.

I think it’s quite common amongst musicians:you’re on the road, hanging out with like-minded and wonderful people, only to come home and be treated like what you’re doing is, ‘Not real’ if you get me?

Kind of… it’s like post-trip depression for me, only a hundred times worse I assume.

We probably feel it the exact same. Going back to the real world after an experience like that is soul crushing.

Your first gig was at the Bonsai Mammoth anniversary party in Guildford in February. It was amazing. What are your plans as a band for the rest of this year? I see you have a weekender in Belgium planned (El Topo Goes Loco/Brak&Skate) But you also mentioned ‘Tour-time’?

Yeah! That first show with Darko was just unbelievable, what a great weekend. That day was so nerve wracking! All the best bands and us singing about monkeys, it was scary and utterly amazing.

And El Topo is going to be an awesome party! Jason and the crew have really outdone themselves this year and I’m seriously happy to be opening cause that means I can watch bands and have a Gincident.

NO INJURIES PLEASE! Some explanation: our best friend split her knee in half and broke some ribs at El Topo (2017) whilst watching The Human Project. There was a pool of blood, some duct tape and a visit to the doctor the next day for stitches. Since referred to as the “Gincident”.

No! The original Gincident was when Byatt (No Contest) got leathered at Balloonfabrik in Augsberg on gin/radler and he fell out the van while trying to puke and he cut himself to ribbons. And landed in his puke.

Wonderful! We’re getting off track here. Back to the plans!

As for the rest of the year, we have a show in Glasgow in June then in July, we’re touring the mainland the 10 days leading up to KNRD (10th – 21st). We have some dates available, just get in touch if you want us to noise you up. We’re on the road with Head Honcho from Seattle. Ananananada is a KNRD regular and a wonderful guy. Cannot wait to introduce him to Slovenian Schnapps!

Love Ananda. Great news! If you had to pick one band that is your collective favourite, who would it be?

This is actually pretty impossible. We all listen to different yet similar things.
Collectively…Might be Vengaboys.

Tell us something about TAH we don’t know yet…

We’re heading into the studio this Saturday to start recording drums for the album.

I already knew that.

Yeah, you do cause we’re roomies… for the next couple of weeks.

Mimimi. You’re too nosey for your own good.

…Shut up Dave. When can we expect this new album? How far along are you?

You can expect it next year, would be awesome to have it ready to go on the one year anniversary of the, ‘Vs’ release but we’ll just have to see. We’re still very much writing it but we’re ready to start the process so that’s always good. Either way we’ll be looking at 10-12 songs, some of which are monkey themed.

Awesome! If there is one Scottish saying you’d like our readers to know about, what would it be?

We’ll cover, “Hee-Haw” which is what you get when you’re not getting anything.

“He who hingeth aboot getteth hee-haw”

Exactly. Long may your Still Game obsession continue. Just try not to force it upon Belgians or Southerners again. It doesn’t work.

I tried and failed miserably.

That’s plenty. Thanks for taking time out of your busy guitaring-schedule to answer my questions.

Thanks to you for taking the time. And thanks again to everyone at Shout Louder for liking the songs and sharing and mentions and all that, very much appreciated.

Pick up a copy of Vs, the split from Money Left To Burn and The Affect Heuristic, from Lockjaw Records now. It could well be the best thing you hear all year.