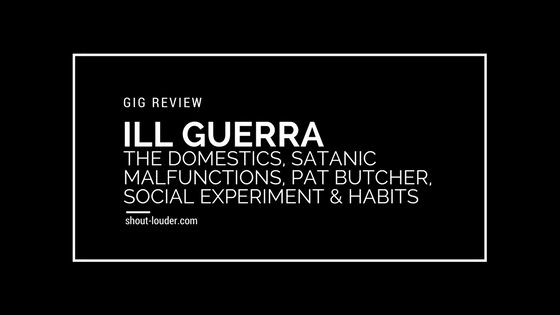 Article by Sarah Williams. Atrocious photos taken from my phone.

The main reason I relocated to Manchester was the luxury of having fantastic punk rock shows right on your doorstep, every single weekend. This particular gig, held at Fuel Cafe in Withington is a stone’s throw from my house, and is therefore the shortest distance I’ve had to travel to see bands since I lived on Camden High Street a decade ago. I’m living the dream.

MBBP have a reputation for putting on raucous live shows, always trying to pack six or more acts onto a short bill. It’s incredibly exciting to see a variety of hardcore punk bands from around the country playing tonight, including Welsh acts Habits and Social Experiment plus Yorkshire’s Pat Butcher and Satanic Malfunctions. The highlights of the line-up are reliably ferocious East Anglian act The Domestics and esoteric Spanish foursome Ill Guerra.

The room upstairs at Fuel is an unusual venue space: it’s a small room divided by an archway, with a stage painted with black and white zigzags. The night begins oddly, with Habits closing the windows and drawing the sumptuous red velvet curtains behind them to kick things off, like the band haev suddenly been transplanted onto the red room set of Twin Peaks.

Habits are a band that I would happily watch headline. They play dark, furious post-hardcore, buoyed by a lot of lush guitar tones and stormy chord changes. It’s like More Than Life, Have Heart and Defeater had a Welsh DIY baby. Nosebleed begins with a solid moody section but mutates suddenly into a much harder-rocking tune, before descending into a frantic, drawn out breakdown. Work is an indignant polemic, although the sound is ultimately positive. Other songs drift through themes of jealousy, sex and drinking yourself to death. The singer introduces each song by name and a brief explanation of the subject manner, which is super-handy for note-taking twats like me.

The singer has energy, charisma and a crazed, captivating way of roaming around the floor in front of the stage. Musically he drifts from speaking to howling in a way that isn’t jarring, occasionally pausing to stare intensely into blank space. Halfway through the set he has to strip off his shirt; it’s already swelteringly hot in the tiny venue. The subject-matter and his attitude compliment the flowing, moody hardcore of instruments – an absolutely sterling introduction to the evening.

Social Experiment are so new that they don’t have an online presence, so I can’t check them out before the show. I don’t know a great deal about them, although I do recognise Paul Payne from Bring To Ruin/Regret and general punk show attendance. They play proper hardcore punk with some really funky bass lines, gritty riffs and thundering percussion. They roll through a fast set however, much like the rest of us, they look to be struggling in the heat a little. I enjoy some of the dual shouting shared between the singer and guitarist, which sounds appropriately bleak. There are some quite fun rock guitar parts thrown in, but primarily it’s an aural assault.

By the time Yorkshire lovelies Pat Butcher start setting up, the upstairs room at Fuel has reached Mediterranean summer temperature and everyone’s dripping sweat. I first caught these guys at Pie Race last year, where I enjoyed their tongue-in-cheek style of hardcore. It’s infinitely danceable party music, without being cheesy or novelty. They open with a little self-titled theme song, followed by a great track called Crop Circle (I think) about our Theresa May’s fondness for frolicking in fields of wheat, which singer Aaron introduces by asking an audience member, “What’s the naughtiest thing you’ve ever done?” If punk music isn’t about having a dance and ripping the piss out of the Prime Minister then I don’t want to be part of it.

The whole set is thoroughly entertaining, with an amusing edge to all the songs, even the ones that are breakneck fast. The band are now notorious for their speed-eating challenge, where four audience members are challenged to consume a carrot in the time it take the bands to play the overwhelmingly catchy Carrot In A Minute. I don’t think I’ll ever get sick of watching it and the song is lodged in my head for a week. They finish off with a tune on the topic of cats which, wonderfully, features a cowbell (seriously, folks, more cowbell please) and a little section of shredding on mini electric mandolin.

Scarborough’s Satanic Malfunctions are overwhelmingly ferocious. The singer roams freely around the stage and out into the crowd, shredding his vocal chords with death-style screeches. Their opening salvo makes them firm winners of the how-fast-can-you-play competition, but it’s later on when the drummer stands up for a song that really catches everyone’s attention. He’s staggeringly fast and can’t seem to wipe the grin off his face. All of this is underpinned by growling, hammering riffs, bringing each of their tunes into the hefty headbanger category. Satanic Malfunction go off like a nuclear bomb in this tiny space and I’m already looking forward to catching them again.

Perhaps the biggest draw of the night are TNS favourites The Domestics, who are regulars in Manchester despite living over 5 hours away in Suffolk. The Domestics are a band that consistently deliver absolute chaos, taking everything they have and hurling it at the wall. They roll through a fast-as-fuck set of 20+ songs, many of which are shouted straight back at them by the frantic front-row audience, like Orchestrate Your Pose, new on No Receipt No Return and Shut Down. Unlike a lot of hardcore bands, I quite enjoy the fact I can hear the words pretty clearly with Domestics. Throughout all the songs are some of the tightest snare work you’ll see, with Simon playing a stripped back kit, plus unrelenting guitar and bass. Guitarist, Dan, occasionally throws fun little metal flourishes, although it’s a bit overpowered in this small room.

There is zero fucking about with The Domestics, like a hurricane destroying a cherished family home: total destruction and no looking back. Frustration encapsulates their sound; the whole picture is a huge release of pent up frustration. Simon’s sharper vocals punctuate lead-singer James’ growling, percussive drawl in a way that lift their songs perfectly. James is constantly moving, standing just in front of the stage and goading the audience on. By now the space is cramped with enthusiastic punks; you can taste the sharp tang of other people’s body odour and the miasma of spilled lager.

Ill Guerra have travelled all the way from Barcelona for this small tour with The Domestics, and I’ve been really excited to check them out. It’s unlike anything I’ve seen previously. They turn out fuzzy esoteric hardcore that is much slower than many of the other acts tonight. There’s a triple layer of delay on the vocal that sounds unusually trippy, like you’re in echo chamber with waves of heavy noise. Outside of the experimental vocal, the band play fairly traditional hardcore, rolling forward with unstoppable force. Notably, their drummer also has the only mullet I’ve seen anyone rocking outside of Rotten Foxes. Some might say that’s completely irrelevant to a review, but I couldn’t take my eyes off it.

Their singer can’t stop moving, roaming in front of the stage looking crazed, conducting most of the set facing the rest of the band. They pick up the speed on the final two songs, ending the evening on an exciting, enticing and confusing note, like a drug trip you weren’t expecting. It’s quite entertaining and all round it’s been a fun, fast evening.