Sweet Diego are a new West Midlands-based band, who play pop-punk with a wry, Brit-pop slant to it. Their excellent second EP The After Party is out right now and they’re playing Dügstock on Easter Sunday. Shout Louder’s Mark Bartlett spoke to lead singer Diana Nguyễn to discuss the new EP, their inspirations and where the band is headed in 2018.

What’s the origin story of Sweet Diego and where did the name come from?

Before I joined Sweet Diego I was writing songs solo on my acoustic guitar, but I was too shy to share them online. Singing was a secret hobby of mine at the time but I found it extremely difficult to write songs on my own because I only knew a few guitar chords, which meant that all my songs were either really short or incomplete. It frustrated me that I had so many ideas but couldn’t put them together, so one day I decided that I wanted to collaborate with people. I spent some time online searching for musicians who had similar music tastes to form either a duo or a band and it was a crazy journey for me, but I met some amazing people along the way.

After some trial and error, I finally came across Mitch (our bassist) who was looking for a lead singer to join their trio, who were previously a five-piece named The Real Quaid. We exchanged demos and found that our writing styles and tastes in music were very different. I love listening to punk rock but I had never written a punk rock song before, however I instantly vibed with one of their tracks. So I wrote lyrics to it, recorded it on my laptop, named it 40 (which was later changed to Kabigon on our first EP, Kong’s Little Finger) and sent it over to Mitch who digged it and booked our first practice. I was anxious that it was going to be super awkward, but they were all so hilarious and we kicked off to a great start. Prior to Sweet Diego, I had never performed on stage or recorded music in a studio before, so I’m very thankful for the all of the amazing experiences that I’ve shared with these guys; they truly are some of my favourite people.

Have you all played in bands previously or do any of you play in other projects?

Performing in Sweet Diego has helped me gain more confidence over time. I only used to send songs to a few of my friends but now I’ve started sharing some of my solo work online, which was a huge step for me. I post short covers and originals on my Instagram in my spare time, which is a lot different to Sweet Diego’s music – it’s much slower and emo.

How would you describe your sound to someone? Is there a genre within punk you feel any special kinship with?

It’s quite tough to pinpoint because we all like artists from all sort of different genres ranging from hip-hop, EDM, folk and cheesy pop music just to name a few. It plays a massive part in our writing, in terms of the ideas we come up with in Sweet Diego. Overall though, most of our music is upbeat and catchy. Some of our songs will make you want to dance and others will make you want to smash a plate on the floor (or several).

Which artists have been huge influences on the band and also you personally?

Again, it’s pretty difficult to answer this since we bring in different ideas to the band based on what we listen to individually. Collectively some of the bands we love are Blink-182 and PUP, but I wouldn’t say we sound like them or are influenced by them at all. Personally, some of my favourite bands would have to be Have Mercy, Linkin Park, Modern Baseball, Paramore, Tiny Moving Parts, A Day To Remember, Say Hi, Basement, Moose Blood and The Story So Far – the list can go on! The others will probably shake their heads when they read this because I’m sure they disagree that some of these bands are amazing!

What are the main themes and topics of your lyrics?

Although I think our music is very upbeat and catchy, the lyrics I write are kind of sad I guess. Some of them stem from personal experiences that have happened in the past or things that I wish had happened instead, which is quite nice when performing live because it gives me an opportunity to channel all of that of anger and sadness in a healthy way. I also write lyrics about picking yourself up after going through an emotional whirlwind, feeling worthless on your lazy days and laughing off mistakes you’ve made. So, in a nutshell I guess the main themes would be past regrets, staying hopeful and trying to accept your flaws.

What music do you love outside of the punk genre?

Ahhhh, there’s too many to name! I’ll list a few artists in some of the genres I love. So, some of my favourite alternative rock bands include Death Cab For Cutie, Tellison, Kings of Leon and Arctic Monkeys. I also love indie folk artists like Bon Iver, Ben Howard, Hozier and Daughter. Neo-soul artists like Miguel, Jhené Aiko, Frank Ocean and Daniel Caesar. Trip-hop artists like Little Dragon and FKA Twigs. Lastly, this is a guilty pleasure… I love K-Pop. My all time favourite K-Pop group is 2NE1, who unfortunately disbanded two years ago (I’m still not over it).

How does the creative process work within the band?

We all jam on our instruments at home and from time to time we come up with something catchy. When we have that moment of creative spark, we make sure to record it and share it on our group chat or upload it on Dropbox and if we all dig it, we chip in our ideas based on that foundation. Usually Mike, our guitarist, would come up with a short catchy riff for an intro or a chorus and I’d write lyrics over it and record it. By the time Ad and Mitch adds their drum and bass parts, the song transforms into something completely different to what I imagined it to be. It’s exciting to see how our individual influences shape our work, it’s kind of like pass the parcel. 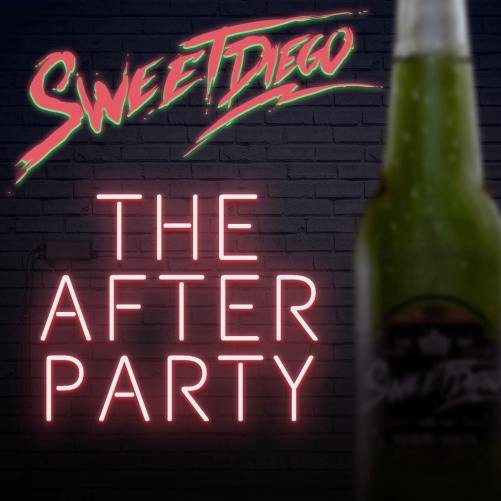 Your new EP, The After Party, is out now! What does the title reference?

The After Party is about reflecting on your bad experiences and knowing that it’s possible to bounce back from them. Sometimes when we’re feeling down we force ourselves to go out to a club or a house party when we don’t really feel like socialising at all. The title refers to the celebration of pushing yourself to do that and realising it’s not all doom and gloom when coming home from a great party that you would’ve missed out on. It’s out now on iTunes, Spotify, Google Play and other platforms. We’ll have physical copies of The After Party that you can pick up at our upcoming gigs too!

How do you see the UK music scene currently? Do you think it’s in good health?

I think the music scene in the UK is amazing; there’s a little bit of everything out there in right now, from hardcore to lo-fi shoegaze. People are experimenting and branching out into different genres, which is really nice to see. Also, I know that there are a lot of female musicians stepping up in the punk scene at the moment and advocating for women to be given the opportunity to do their thing on stage. Big shout out to Holly from Kiss Me, Killer and Hell Hath No Fury Promotions for being one of those amazing people.

What’s been your proudest moment in Sweet Diego so far?

It would have to be supporting The Bombpops on two dates of their European tour last October with our friends in Shackleford and On A Hiding To Nothing. The Hairy Dog’s stage is the biggest we’ve played to date, so that was pretty cool for us. Overall, The Bombpops were just so lovely and hilarious. We all got drunk, played pinball and ham-slapped each other. It was wild.

What’s your favourite Sweet Diego song and why?

My personal favourite are between LOL, My Life Is A Meme and Eat, Sleep, Repeat, both of which have similar themes. I don’t know if we’ll release them, but we really enjoy playing both of them live so who knows.

What bands are really exciting you right now?

My favourite album right now is Peripheral Vision by an indie rock band called, Turnover; their stuff is really chill and dreamy. Also, I heard on Twitter that the new Arctic Monkeys album features Playboi Carti, Quavo, DJ Kahled and Gucci Mane! I’m not sure if it was a joke but I would really love to hear what it would sound like.

We’ve got Dügstock 2 coming up in April at New Cross Inn hosted by the awesome Umlaut Records. Some of our good friends are playing the Easter weekender too, so it’s going to be an absolute rager. We’re also really looking forward to playing with Get Dead at Redrum in Stafford, with our pals in Shackleford and Aerial Salad. We don’t have any tours planned for 2018 yet, but that could change. We’ll see and keep you posted.

Where are the best places for people to check the band out online?

We post our latest gig dates and other announcements up on Facebook. We’re also on Instagram and Twitter but they’re both a bit dead because the others are grandpas when it comes to social media but maybe we’ll try to change that this year.

Any word of advice for people in bands out there?

For many people in bands, music is everything to them. Just remember to take a break from it every now and again to tune into the important things and people around you. I think music is a great outlet to express yourself, but there comes a time where we have to face people head-on and be vocal about how we feel.

Can you remember what the first CD/LP/Tape etc. was that you bought?

The first single I ever bought was Lonely by Akon and the first album was Slicker Than Your Average by Craig David.

If you had to replace yourself with a member of another band, who would it be?

Thank you to Diana of Sweet Diego for chatting to us. Make sure you check out their new EP The After Party and catch them at Dugstock this weekend.

One thought on “Sweet Diego: “Past Regrets, Staying Hopeful and Accepting Your Flaws”[Interview]”