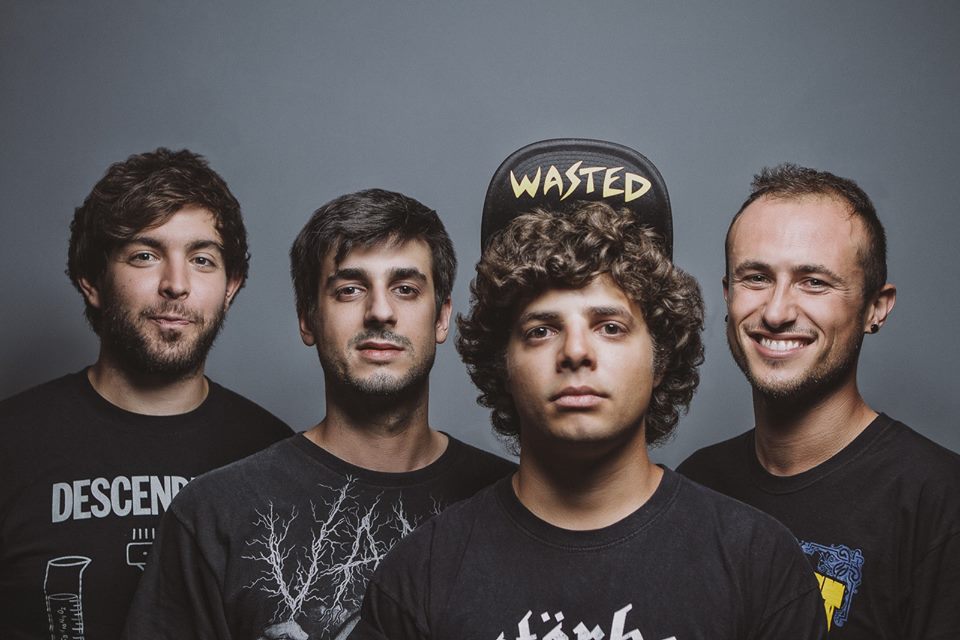 I always get excited when I see band on a bill who’ve travelled from another country. It is often a chance to discover a new act and usually they turn out to be the best on the line-up. Inviting bands from mainland Europe to play the best way to bring new talent and inspiration to our local music scene. I’ve also got a lot of respect for bands like LineOut for making the effort to visit us for a couple of days – it’s a lot harder to get here from Milan than it is to sit staring at the M6!

LineOut are a band I’d heard plenty of good things about, but it wasn’t until they announced their current run of UK dates that I realised I hadn’t actually listened to them. I was impressed to find an energetic mix of punk, melodic hardcore and thrash that ticked all of my boxes.

Knowing that I would be seeing them at Shredfest this Saturday as well as at Punk Rock Holiday in the summer, I was keen to find out more. I was lucky enough to catch up with singer/guitarist Andrea Codini just in time for the tour.

I was hoping you could give us an introduction to the band, for those who may be less familiar with you. What can people expect from your live shows?

We will make sure that it’s not a boring show, for you! We always try to put a mix of songs into the set list, to cover all different styles. Everything from punk rock, to metal, to funk! We’re not the kind of band to play all the same style of songs. 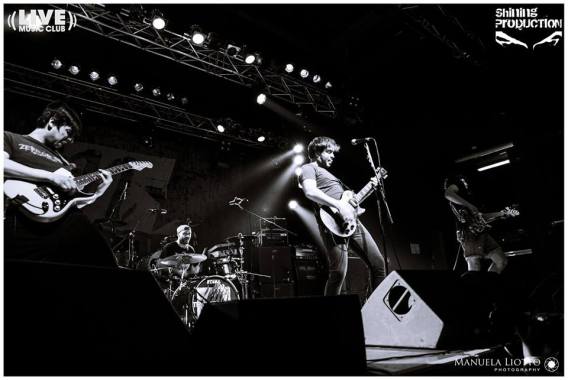 Who are your biggest influences?

In the underground scene we’re big fans of Mute, Satanic Surfers, Atlas Losing Grip and Discomostro. We love skate-punk that mixes with solid riffs and 80’s hard rock influences. The biggest names that have influenced us would probably be Pennywise, Iron Maiden and Lagwagon. They helped us make our path.

You released an album last year – Blast in Turbigo. Is Turbigo the part of Milan you’re based in?

Exactly, it’s the name of our hometown. It’s a small and cosy village that is unfortunately very close-minded and obsessive with religious stuff. On our album every song talks about a corner of the city and tries to push people to go beyond the borders of Turbigo.

What was best about recording and touring the album? Does it differ to your earlier releases?

Luckily, it’s always been pretty much the same over the years. We were friends before starting the band, so it’s cool to get to spend time together, see new places and forget, for a while, about all the duties and issues that you’ve got at work or home. It’s a great way to positively escape from reality. We try to change the place and the way we record or every album, so that we don’t get bored.

I heard you recorded it up in Sweden with Gustav from Atlas Losing Grip? That must have been pretty cool!

Yeah, Gustav is probably the best sound engineer I’ve ever worked with. He is super kind and professional, he has a solid background and he knows how to make you feel comfortable in the studio.

You’ve toured the UK before – what’s your favourite thing about visiting us?

Without hiding behind stupid theory, in UK people seems more interested about punk music than in Italy. We’re always surprised about the number of gigs and band composing the UK scene.

That’s funny, because we hear the reverse about Italy – that the skate-punk scene is much bigger and better than in England! What would you say are the biggest differences in the UK and Italian punk scenes?

The Italian skate-punk scene is dead.

What makes you say that?

The number of bands and concerts has collapsed in the last couple of years. It’s very hard if you want to put on a gig for a band that are travelling from another country.

Where will you be playing this time around? Anywhere new?

We are going to play in Lincoln for our very first time. The promoter has spent a lot of effort in booking the gig. We’re really grateful to find super nice and positive guy like him.

Are there any bands local to you that you would recommend we check out?

Yes, of course! I really recommend Thousand Oaks from Rome (featuring ex-members of Jet Market) and 7 Years from Livorno.

You’re playing Punk Rock Holiday as well! What a special place. What other big tours/dates have you got lined up?

We used to play as much as we can but currently we’re trying to slow down a bit in order to focus on new songs. We are probably going to tour Brazil in early September.

Finally, if you were lost in the wilderness with no other option apart from cannibalism, which member of the band do you think you would eat first, and why?

Probably me because I’m the fattest one!

Massive thanks for Andrea for chatting to us. We are really looking catching LineOut at Shredfest in Manchester – an awesome escape from all the St Patrick’s Day nonsense. As the name suggests, it’s a full day of melodic hardcore, where LineOut will be playing with the likes of Almeida, Sombulance, Dead Neck, Laughing In The Face Of and No Contest. LineOut are also playing in at Liquor in Lincoln on Friday 16th March, along with No Contest, Dyin Flies and Nieviem.

You can hear their latest album Blast In Turbigo over at their Bandcamp page, or pick up a copy from Lockjaw Records.