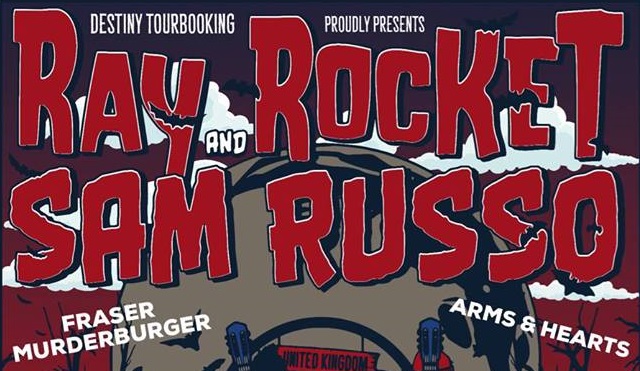 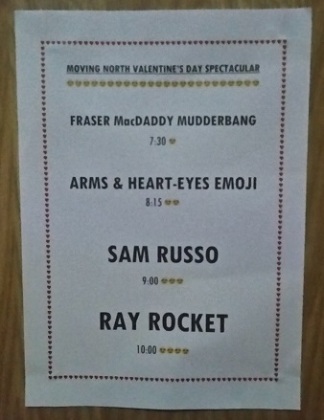 Fraser kicks things off, commenting that he’s pleased to be correclty referred to on the poster as MacDaddy Mudderbang. This sets the tone for an evening of in-jokes, as all the acts really engage with the intimate audience. He opens with Born For This which, like many of his songs, is catchy, energetic and self-deprecating. His vocal has a gritty, edgy tone which works well as part of an acoustic show, although we’re more familiar with him belting it out live with The Murderburgers. It also sounds great on his poppy cover of Descendents’ Hope.

Halfway through the set he seems to shed some nerves. He actually declares that he ‘thinks he’s enjoying himself,’ before going on to play Another Way Out Of Here – a tune about ‘trying to find a way out without tying a noose and kicking a chair’. He also plays Wank, Florida, Wank, the gloriously named new single from his other band Fuck (It’s Pronounced Shit). He shouts out audience members (well, mainly just Mikey Wong) and chats to Ray, who’s sitting at the back of the room. It makes for a very intimate and friendly show. Everything about his set makes me happy and I’m grinning with laughter by the end of it.

Up next is Arms & Hearts, which is the moniker of solo singer-songwriter Steve Millar. He opens with a tune called Sore Sight For Sorry Eyes, a good example of the clever, emotive turns of phrase that he often uses in his lyrics. He seems to write with traditional tattoos in mind; if Arms & Hearts gains more popularity, soon everyone will be walking around with his words inked in banners around roses and skulls. Every word comes across crystal clear because Steve has a good, practised microphone technique, allowing you to fully appreciate the rich range in his voice.

Blue Sky Minds fees like it would benefit from a violin in the arrangement, but is beautiful nonetheless. He takes a pause to talk about mental health and how it links with one of his earlier EPs, the aptly named Too Much Sleep Not Enough Dreams. He also talks about Sam Russo being one of his personal heroes, something which is quite clear in the style of his songwriting, along with influences like Brain Fallon and Chuck Ragan. He plays a strong, lively tune called Wires Crossed but ends the set by stepping off stage into the audience to play Fortitude, the title track from his latest EP. It’s warm, moving and completely acoustic. It feels oddly special to hear someone play completely unplugged; it’s the most memorable moment of the set. 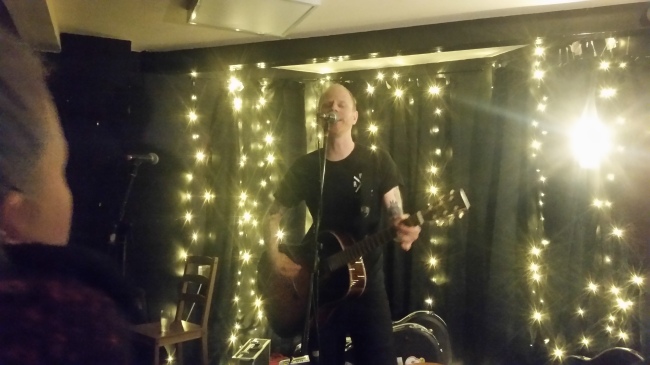 Sam Russo is one of the most talented acoustic performers in the country and his set tonight only serves to further cement that notion. He has a quintessentially British style of poetic, evocative songwriting, accompanied by warm acoustic guitar and traditional folk storytelling. I’ve often found it surprising that he is so firmly rooted in the DIY punk scene, when his musical style such brilliant acousic folk, but I believe it’s his delivery of tales, anecdotes and jokes between songs that has caused so many of us to fall in love with him. Even mid-song he’ll chuck a one-liner without missing a breath, most commonly in this set whispering, “Happy Valentine’s Day,” during some really depressing verses. The genuine quality and relaxed humour of his approach transcends genre affiliation.

He tells us stories of his friends taking too much cocaine, of his grandfather’s Tinder girlfriend in Germany and of miming along to Slipknot songs in his first band Adamantium Dreams. He starts off with Western Union and hammers straight into our hearts with his strong but dynamic, plaintive vocal. It’s the sort of sort of show where you just move your lips to the words rather than singing along, especially in the whispered breaks after choruses. We’re treated to Nobody’s Fool and my personal favourite Dry Shampoo, after Sam takes a pause to change from one busted guitar to another. He tells us that Small Town Shoes was written here in Manchester, adding that it’s his favourite city, which explains why I’ve seen him more here than elsewhere even though we share a home county in Suffolk. He closes an exciting, intimate set with a huge bottom-of-your-lungs sing-along for Sometimes.

Ray Carlisle, better known as Ray Rocket, best known as the frontman of power pop punks Teenage Bottlerocket, has been billed as playing solo but he brings Fraser on to play the whole set with him. Apparently they played two songs together the night before in Bristol and it worked, so they decided to build on it. Their dynamic works really well and Fraser’s harmonies and guitar add a lot to the sound, plus a plethora of opportunities for jokes and amusing ‘Ramones’ intros. One of the most precious things about live music are the occasions when you know you’re getting a unique experience – something which will never happen again. This is one of those times; I know I’m witnessing something special.

Ray Rocket opens the set by saying they’re, “Stoking it like fucking Hetfield up here, dawg,” bringing his Wyoming background into immediate relief. They start by playing his solo hit Do You Wanna Go To Tijuana and go on to play a range of solo songs, Teenage Bottlerocket tunes and select covers. Highlights include TBR track Without You, a slow, heartfelt cover of Ramones’ classic Pet Sematary and a big sing-along for Nothing Else Matters.

Ray tells us that their plan is to go from rad to sad with every song, to keep us on our toes. Easily the top song of the set is one that was unplanned – an audience member had made a passionate request for Ray to play Maverick. The guy who asked for it looks so unbelievably happy when Ray plays it and everyone sings along, it’s quite touching. It’s so quiet in the room that he’s even able to say thank you. Even more heart-wrenching is Ray’s tale about his brother Brandon (who drummed in TBR and unfortunately passed away in 2015). He tells us a joke that finishes on choked-back tears: as twins Ray would pretend to be Brandon and vice versa, something which he once wrote a nonsensical chorus about. Now that Brandon has passed away the lyrics, “For the first time I can’t see you, I can’t be you,” finally make sense. It’s a deeply emotional, touching and beautiful moment, lightened by a reference to phantom twin boners. Frankly, I’m grateful that Ray’s willing to share these moments with us.

Everything is slower and more stripped back than Ray’s full-band material but it still holds the bright, fun element that is everyone’s favourite thing about Teenage Bottlerocket. It’s a great set to end a fun and intimate evening.

P.S. We discussed this gig and the following show in London on Episode of the Shout Louder podcast! Have a listen here, or over at Soundcloud: