F.O.D. and For I Am provide surprising evening of skate/pop-punk shenanigans in Manchester with help from Upstream Colour, Aerial Salad and a bear.

This was a gig full of surprises. I was surprised to find a tiny venue in the back of The Eagle Inn in Salford, a building that has more in common with a mythical labyrinth than a pub. The venue has more height than floor-space, a minuscule stage and a lot of exposed brickwork, all found via a maze of corridors. A floor has been removed to make way for a stage, so I suppose I shouldn’t be surprised to see an open fireplace 8 feet up the wall, just above the guitarists’ head.

When I arrive the crowd is a little sparse, so by the end of the night I’m pleased to see the room full of people dancing and cavorting, with plenty of further surprises along the way. The evening serves as proof that you can find a room full of drunk Belgians having a great time just about anywhere, even in Salford. So much great punk rock seems to be coming out of their country at the moment that it’s almost unfair on the rest of us – F.O.D. and For I Am are just some of the highlights and I’m chuffed they have decided to tour this far.

Also, I was surprisingly late. I’m still getting the hang of the Manchester bus system (by which I mean I still expect them to move quickly, rather than oozing their way round town like treacle) and, as a result, I unfortunately missed Clayface. I was gutted, as they were great when I saw them at Pie Race last year.

I do make it in time for Aerial Salad. I am always excited to see this fresh power-punk trio, although I think it’s the first time I’ve seen them in their hometown. [Irrelevant side note: I did have the chance to see them at the Manchfester all-dayer 2 years ago, but I skipped their set because I was hungry and I thought their name was shit. I’ve learned my lesson.]

Aerial Salad are the tightest I have seen them by a distance; their recent extended tour with Wonk Unit has clearly given them the practice they needed. That said, they’ve still not quite got the hang of talking to the audience rather than to each other between songs, although Jamie’s awkward anecdotes about leaving his corporate sell-out job are endearing.

97 remains their strongest song, with Jamie bitterly drawling the opening lyric into the mic: “I’ve just told my Mum I’m going to kill myself, it’s so easy now.” It’s powerful both live and recorded. The stage is so small that for me, stood at the front, I feel like I’m hearing all the raw crunch and power straight off the back line rather than through the PA – it’s an intimate set to say the least. Habits and Problems is a right racket – the kind of catchy noise you expect from a young Mancunian punk band. Check My Mind is perfectly designed to get lodged in your head, purely for the stripped back intro that smacks of Longview-era Greenday. Aerial Salad get a lot of Greenday comparisons, but they are beginning to carve out their own space, with a sound that’s youthful, angsty and raw. 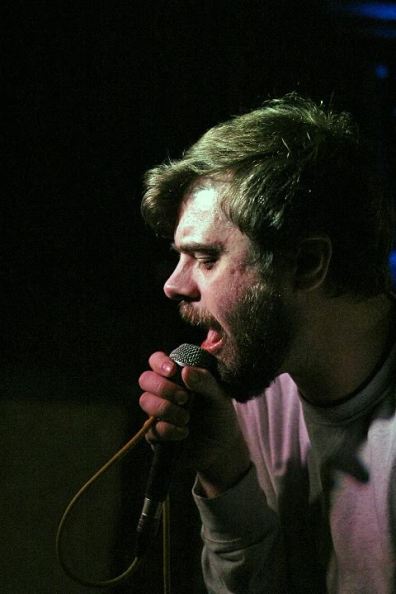 It’s my first time seeing Upstream Colour and I’m thoroughly impressed. They’re a local four-piece who play quite technical, melodic post-punk/post-hardcore – it is closer to metal than punk but it’s conveniently right up my street. I feel like they’ve got a lot in common with Alexisonfire, but that might be wishful thinking on my part. Their whole act is very tight, but I’m particularly impressed by the drummer, who looks cool and collected while nailing every beat and chucking in tricky little cymbal fills.

I’m similarly transfixed by the guitarist – he manages to get a lot of love from his 7-string, along with some lush tones that bring to mind the recent Counterparts records. He calmly navigates a lot of little finger-tapped sections, particularly on their penultimate song, which is so technical that it brings a big grin to my face. Their vocalist is what gives the band their edge, though. His style is very dynamic and soulful for someone fronting a hardcore band – it reminds me of 36 Crazyfists and Almeida in equal measure, although it’s probably more accessible than either of those. Unencumbered by an instrument, he’s free to add a lot of physical emphasis and passion to the lyrics. If I had to criticise their performance, I’d simply say that the set was too short.

F.O.D. and For I Am have both travelled over from Belgium, currently sharing a bass player and a lot of friendly love on the tour. Their styles are distinctly different though: F.O.D. provide more classic skate-punk full of harmonies, whereas For I Am offer solid, upbeat pop punk. The tiny stage in the Eagle Inn looks cramped for all the bands, but none moreso than Belgian 5-piece For I Am, with the vocalist performing most of the set either stood in the crowd or perched on the steps up to the stage. This only adds to the intimacy of the performance – I want this band to be my new best friends. It feels like they already have that relationship with the rest of the crowd; there’s a group at the front taking selfies of themselves drinking red wine, which the band jokingly photobomb.

I immediately fell in love with their singer, Hanne – her incredible voice and their skilled musicianship means that For I Am could give Not On Tour a run for their money. She enunciates and delivers each line perfectly, bringing a lot of soul and passion into the performance. Bassist Bo has heaps of energy and character and can’t stay still on stage, all the while adding some lovely hooky basslines into the mix. The full sound is fantastically catchy, fast pop-punk with oodles of fun ‘whoa-oh’-type singalongs, like Descendents meets Paramore meets the best party you’ve ever been to.

Perhaps most importantly, the whole band look like they’re having the best time ever. The crowd pick up on this and really get into it, with one attendee demanding a circle pit, as it’s Friday night after all. F.O.D.’s Hans Roofthooft joins them to sing a song about being together with friends which, as one of the slower songs, slightly confuses those trying to get a pit started. They shift back into gear for a fast cover of NOFX’s Leave Me Alone before finishing on their own song Time and Time Again. After the set you can hear the audience humming the melodies as they walk to the bar.

Finally it’s time for F.O.D. In late 2017 they brought out a new album called Harvest that I’m extremely excited to get to hear live. Although it’s a small venue there are a lot of other very keen faces in the room, people who know all the words and can’t wait to shout them back at the band. It’s a surprising reaction for a band who say it’s their first time in the UK.

F.O.D.’s vocals are quite unusual and really make the band stand out. The main vocals comes from guitarist Hans with added contributions from drummer Lode, however they’ve also got Stijn who’s purely singing harmonies without an instrument. The concentration on vocal harmonies adds nuanced depth to their songs and enables them to excel in earworm-catchiness. So many of their tunes feature big lyric-less ‘whoa-oh’ shout-backs that are perfect for a sozzled Friday night crowd, even if they don’t know the words.

The first two songs of the set are proper singalong skate-punk, simultaneously techy and classically balls-out with proper catchy vocal hooks. Heroes and 41 inspire a huge soaring sing-alongs from the audience. Dear Grace is slower and lower but has a banger of an intro that excites the crowd. They even chuck in a nifty and uplifting cover of Frenzal Rhomb’s 5000 Cigarettes.

Just as the third song kicks in a surprise visitor arrives: a bear bounding into the pit from the back of the room, stirring the dancing into full swing. He scoops me up in a huge bear hug. I hate to think how overheated the guy in the bear suit is, but he keeps moving for the rest of the set, whirling around blindly and tripping over his feet, having fun. I’ve never seen a crowd so enthusiastic about picking someone up when they fall over, everyone wants to look after him. It’s a thoroughly intimate and friendly set, one of those inspiring shows where there seems to be no barrier between fan and band.

The night ends on a slightly bum note. The band had already run over the strict venue curfew by five minutes and therefore, although the audience are calling more enthusiastically for an encore than any I’ve seen lately, the band can’t play any extra songs. The lack of encore leaves the crowd chanting the words to one of the last songs at the top of their lungs.

Overall it’s been one hell of a gig. Anarchistic Undertones consistently put on brilliant line-ups in interesting venues and I’m stoked for Shredfest next month. As one guy declared at the end of the show, “FUCK YEAH!”

P.S. We discussed this gig and the infamous bear in Epsiode 1 of the new Shout Louder podcast. Check it out: