This split from Italy’s Actionmen and Manchester’s Dead Neck is an exciting and rare fast-punk find. FFO: Strung Out, Millencolin, Mr Bungle and having your mind blown. 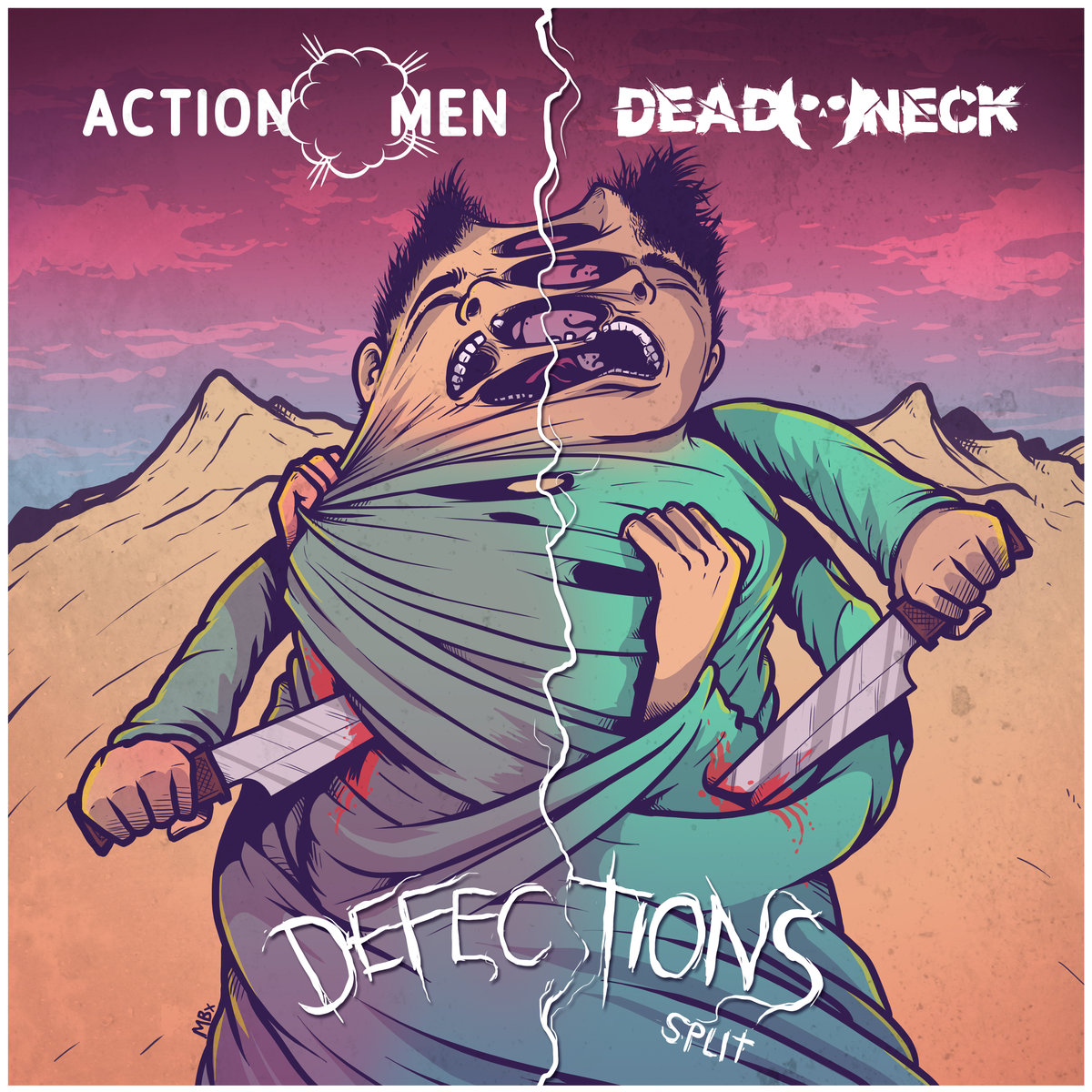 Actionmen are a band that defy description. I’ve heard this Italian group called punk, funk, thrash, gypsy and psychedelia, which barely begins to sum up the fantastic, frenetic racket they make. Their sound is a flabbergasting melting-pot of different genre influences, although ultimately there’s the heart of a melodic hardcore band beating fast underneath it all. This is where they converge with Dead Neck, who are a similar melodic hardcore band from Manchester, with more traditional skate-punk influences evident in their intensely fast songs. Although Dead Neck don’t share Actionment’s flagrant disregard for genres, the two divergent sounds gel well together on this diamond of a split.

Actionmen are up first on the CD, which features four songs from each band. Opener Lion is the single they’ve chosen to stream ahead of the release, presumably because it’s the most accessible of their four tracks. The punk element is incorporated via machine-gun drumming under every second, however the guitars and vocal have more in common with trippy ‘indie’ rock sensibilities. There’s a depth in the distorted words, so gentle and slow in comparison to the percussion, that’s deeply appealing.

Born To Be High opens with a slightly mad little guitar riff. The combination of instruments and paces paints an intricate soundscape in your mind, like an artist daubing varied brushstrokes across your cerebellum, leaving you unsure whether to dance or nod appreciatively. Flowers has more traditional musical structure, nonetheless incorporating a variety of slightly disparate sounds, particularly in the higher-pitched guitar. Actionmen have a progressive approach to composition that borrows from a lot of different influences, bouncing between tones and time signatures with abandon, and yet they tie it together in a way that sound completely natural, flowing beautifully. It’s no surprise, considering two of the band are jazz musicians outside of this project, something which is clear in the skill and freedom of their songs.

If there’s one thing that unites the two bands on this, then it’s a love to short, fast songs. Actionmen’s contributions to the record are all within the under-two-minutes bracket, apart from C’est Dada which is by far the strongest (and maddest) song on the record. It begins with a staccato guitar part that grips your ears, before delving into a short punk section. The riff returns later on in an almost call-and-response section, that’s oddly reminiscent of the Mario Kart soundtrack (in a good way). The song descends into odd guitar twiddling that’s unusual but also intensely appealing.

It is hard to think what could possibly follow or compete with the unfathomable insanity of Actionmen and, as result, on the first listen I’m completely floored by Dead Neck’s contribution to the record. All four songs are grippingly tight and infectiously melodic, with a combination of soaring riffs and shout-it-back harmonies. The biggest influences have come from classic 90’s EpiFat bands, particularly Strung Out or Bad Religion, but it’s paired with the Propagandhi-type technical prowess that’s popular in European melodic hardcore/skate-punk at the moment.

Die Tryin’ opens with the heart-attack fast drumming forms the foundations of all Dead Neck’s songs, however it’s the techy bassline sitting high in the mix that gives the tune its guts. This track deserves to be on the Tony Hawks’ soundtrack, with a couple of choice refrains that would give Millencolin a run for their money.

Similarly, Baker’s Dozen has been firmly lodged in my head since the first listen; I can’t wait to sing back the chorus and harmonies live. This harks of early-Rise Against quality anthemic songwriting and is easily my favourite of the four Dead Neck songs. More of this, please.

Clatter is a more aggressive assault, with a howled vocal salvo twinned with more frantic drumming. The guitars crunch and chug along at pace through the song, shifting dynamically through lighter, more melodic segments. Seven Shades of Shit closes the album with equal force and speed, including some interesting, lifting vocal harmonies. This reminds me a lot of Bad Religion, with somewhat less prosaic lyrics. All four tunes are top-drawer, unrelentingly quick skate-punk full of energy.

Split records are a useful format for cross-promoting bands and sharing costs, but as a listener you often find yourself skipping tracks to get to your favourite band. Defections is the exception to this rule: Actionmen and Dead Neck’s individual sounds converge beautifully on this sharp little record. It’s a cracker and I highly recommend seeking it out.

Good luck getting hold of it; if you’re lucky you can pick up a copy from one of the bands directly, however so far it’s only been sold on their recent Japanese tour. Luckily, there is a UK release coming up! Keep an eye out on Facebook for updates: Actionmen and Dead Neck.