Thank fuck January is over. The darkest month is always a death note for gigs. People are too busy pretending that they’re going to save money, stop boozing or start dieting, when in reality we’re all cramming our faces with leftover Christmas chocolates and eyeing up the crème de menthe. No wonder it’s the month we’re most likely to off ourselves.

Fortunately, February is absolutely chock-a-block with noisy fun times. I’m double-booked on three of the four weekends and curating my top gigs was a right mission. I hope you all appreciate the effort and, in turn, make the effort to get down to one of these splendid shows.

Now, firstly, some shameless self-promotion. I’m not going to announce a Gig of The Month in February because I’m a tad biased…

The first weekend of February sees four gigs from two incredible bands, including one hosted by Shout Louder in Ipswich.

Actionmen are an Italian trio who you’ll rarely catch in the UK. Deciding how to describe them is a bit of a challenge, so you best come check them out for yourselves. Fast-punk, metal, funk, psychadelia, garage, utter craziness? All of these things are good. Apparently ‘post-melodic hardcore’ is a term made up purely for them. You know the general rule that if a band have travelled from mainland Europe to play here it’s always worth seeing them? That rule has never applied more. They’ve been flooring audiences since 2000 and, if you’ve not caught them before, you’d be a fool to miss this opportunity.

PMX are also travelling all the way down from Scotland for four dates in England. If you’ve not heard me bang on about how great they are already, they’re a supremely talented bunch who’ve been peddling skate-punk and melodic hardcore for over 20 years. They’re preparing to release a new album this year and they’ll no doubt play plenty from their recent EP Dark Days. We had an exclusive interview with them last weekend, check it out: Part One and Part Two.

We also interviewed Darko who will be playing our show in Ipswich on February 2nd. They have put together an incredible line up on February 3rd to celebrate the 1 year anniversary of Bonsai Mammoth – definitely a worth the trip: 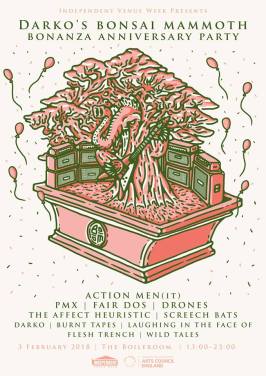 If that’s a tad to far for you, you can catch them at any of the following shows:

Ipswich is only a small town, but it’s got a bloody good punk scene that seems to be exploding right now. It’s just over an hour on the train from London and not at all far from Norwich and Cambridge, so it’s worth making the trip for bigger line-ups.

Late in February, The Steamboat is playing host of a big skate-punk lineup, ranging from old school to modern. Veteran 90’s punks Consumed will be headlining on Saturday, which is also Vanilla Pod’s last ever Ipswich show. It goes without saying that can’t be missed. Earlier in the day is more of a modern skate-tacular lineup, including three of my favourite shredders: Almeida, Dead Neck and Sombulance. There’s plenty of other excitement in the form of Aerial Salad, Burnt Tapes, Alaska Alaska and hosts Paper Champ, among others.

It’s definitely worth picking up a weekend ticket for £15, as the Sunday line-up is worth getting out of bed with a hangover for. France’s Bare Teeth and Norwich’s Clown Smash Everything are the top highlights, with support from local hotties Cheap Heat, new Bury hardcore act B.U.H. and stunning genre-smashers Project Mork.

Make sure you grab tickets for this one as it’s clearly going to sell out. Instructions are on their Facebook page, or contact Paper Champ directly.

Ray Rocket (of Teenage Bottle Rocket fame) will be playing a handful of solo acoustic shows across the UK in February, including Bristol, Glasgow, Cleethorpes and Derby.  His solo material has all the singalong catchiness and simple charm that you’d expect from the TBR frontman, just in a gentler, stripped-back format.

He’s joined by the delightful Sam Russo. Russo’s downbeat, heartfelt songwriting strikes you straight in the heart with every clever turn of phrase. Watching his live show can be equally uplifting and tearjerking; it’s quite an experience. And who can resist yelling, “Russoooooo!” at the top of their lungs, hooligan style?

Their Manchester show at The Peer Hat is the perfect Valentine’s present for your punk rock sweetheart, with support from Fraser Murderburger and Arms & Hearts (who we reviewed a while back). The London show on 17th is yet another massive Umlaut Recs line-up!  They’re playing with Alex Wonk, Dan Goatham (Spoilers), Triple Sundae, Stew Gush, Wayfairer, Lucias Malcolm (Call Me Malcolm) Dan Peters (RxR), SKIV, Mark Noble and C-RAGE. Fully packed day and a nice change to the normal deafening volumes.

When I saw that Free Throw were touring I squealed and leapt around my mate’s living room like a lunatic. I then promptly realised that no one seems to have heard of them. I picked them up from a playlist made by one of The Fest’s organisers last year, heard one song and completely fell in love. Here’s the song:

I love the way it floats from gentle and melodic to throat-shredding fury in a few bars. The dynamics and the lighter approach will appeal to fans of indie-punk and noises on the emo end of the punk spectrum; they wouldn’t be out of place on Specialist Subject or Big Scary Monsters.

They are playing a handful of UK dates with indie-rockers Dryjacket:

Special mention also goes to all the following shows:

Did I miss anything? Give us a shout if you’ve got anything cool going on in March and we’ll consider adding it to the list.

In the meantime, we’ll see you down the front.

One thought on “Gig Guide: Bands You Need To See In February”