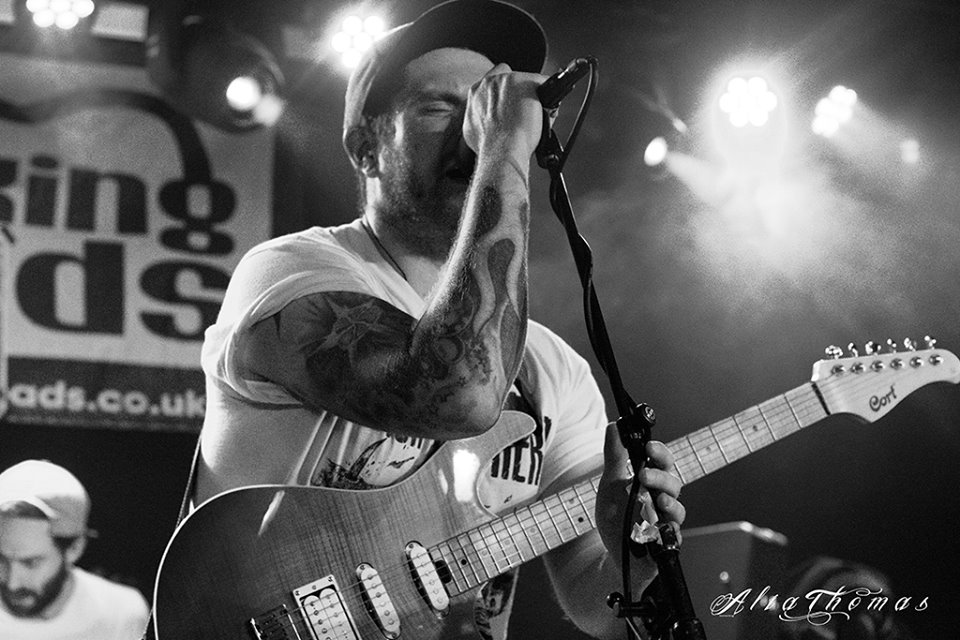 Yesterday, in the first instalment of our 2-part interview with PMX, we got an exclusive look at their history as a band. Check out the article for all the ups and downs that coming of age in the skate-punk scene brings.

As we learned, PMX have been going for over 20 years, although that did include a hiatus and a few variations in their line-up. 2017 has been an especially busy year for them and 2018 is shaping up to be even bigger.

They have just announced the release of a single-session live album, Clochridgestone, on February 26th, the aim of which is to the fund the recording of a full-length studio album later in the year. They’re playing a run of dates with Actionmen in February (including one put on by Shout Louder on February 2nd at The Smokehouse in Ipswich), a handful of festivals, plus a jealous-making jaunt to Japan.

To get us up to speed, singer and guitarist John Harcus and I discussed how they’ve changed and what they have planned for the future.

Your priorities must have changed a lot since you got started 20 years ago. When you first started out as a band, what was your main aim?

To be honest, Pmx has always been about having fun and that priority has not changed to this day. We have always strived to better ourselves as musicians and get our music out there to like-minded individuals who enjoy the music we enjoy playing. It’s always been that way.

What would you say is your main priority for the band now?

To last another 20 years! 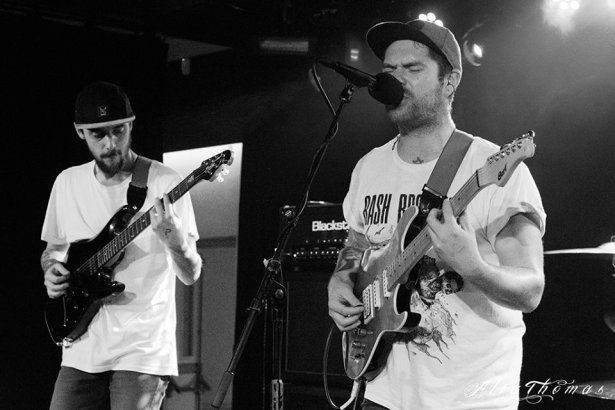 What’s been the highlight of your musical career?

Too many to mention. I’ll put my X-Factor audition at the bottom of that list! We have been lucky enough to play alongside some of our favourite bands and tour in places we never thought we would ever see, let alone play in. We hope to extend that list in coming years.

Long story short, when I was playing solo my mate Tom filmed this rad video of me playing two of my tracks live (below). At somepoint in 2012 I was emailed by some A&R type who saw the video, asking if I would like to come to London to play my tracks to some music producers at Sony Music. There wasn’t really much more info than that other than it could be for publishing, performing or TV.

I went, and when I got there found myself at the Sony Offices. They took me to this casting couch setup where I played live to them and they asked if I would be interested in going for auditions for X Factor. I thought, “Fuck it, you only live once”, so I went to the Free Mantle Media/Syco Offices, did the audition, then fucked off. Never heard from them again!

What do you feel have been the biggest changes in the punk rock universe since you first started out (if any)?

I think one of the biggest changes in punk rock and music in general is a band’s ability to self-record, promote and release their music to an extremely high-quality. Self-distribution through digital streaming services and advertising through social media are powerful tools these days and if used to their full potential can get your music seen and heard worldwide. I still miss Myspace though!!

You’ve been writing and recording new material recently. How far along are you with the process and can we look forward to a full album or just an EP?

We are very much three quarters of the way through the writing and demo process of our second full length. Nine tracks are pretty much there but we like to get the bare bones of our tracks playable and structured then rip them apart, add in more technicalities and work on the finer details in the pre-production process. We hope to be tracking by summer 2018.

The Dark Days EP was brilliant and a real step ahead of your earlier releases. Can we expect more of the same? Do you think your sound has matured a lot?

Y’know, I listen back to Rise and Shine now and again and think that it is inhumanely fast and a definite reflection of how young we were, specifically regarding lyrics and song structure. Between that record and The Ballad of Tony Montana, I had played drums in numerous different bands as well as playing as a solo acoustic artist. During that time I learned a lot about songwriting and song structure in different genres. This certainly had a massive effect on how Dark Days was approached. That being said, I still adore our first record and hope that some of the qualities of Rise and Shine will merge with the tonality and maturity of Dark Days. I feel our music is always best appreciated live and I hope to capture that energy and sound in our upcoming full length.

Musically, who do you think has had the most impact on how you write music?

Influence wise, Propagandhi, Green Day, Strung Out, Lagwagon and Belvedere to name but a few. However the most impact comes from shooting the shit at jams with Matt, Hendo and Kev.

Dark Days was, literally, a lot darker than a lot of your previous songs. What’s most inspired your lyrics on that EP and on the new release?

Politics, relationships, family, friends and life experiences. Matt wrote the lyrics on Dark Days and he is a dark horse. The man is phenomenal at writing and conveying his words. We are working together on the new record with lyrics from the both of us. He’ll spell check mine!

As well as the band, you’re making a real name for yourself in the audio production world. Who have you enjoyed working with most in the last year?

I absolutely love mixing music and trying to get it to sound as best as it can. It has been a passion of mine since I started recording and mixing bands with my tiny little 16-track recorder and dinosaur of a PC way back in 2001.

I am always striving to better myself and in this day and age, where many bands/artists are home recording, I love to lend a helping hand finishing the product so it sounds as professional as I can.

In 2017 I got to work on Bash Brothers debut album, which I adore and The Affect Heuristic‘s four track E.P., which is a monster. I also got to work with my very good friend Derrick Johnston of The Tragical History Tour (and main man at Make-That-A-Take Records) on his debut album, plus Mister Godson‘s split, French folk-punk band Breaking Tag, Goodbye Blue Monday and countless more.

They all share a special place in my heart! When you mix records you probably listen to each song around 100 times in full. It’s safe to say I am all of the artists above’s biggest fan.

What have you got lined up for the business in 2018?

I am currently mixing Money Left To Burn‘s next E.P., then I will attempt to batten down the hatches to get PMX pre-production and tracking nailed but any new projects are welcome, just get in touch!

You’re based up in Perth. What’s the music scene like up there?

Ten years ago I was heavily involved in the Perth music scene as a booker and live sound engineer at our beloved local venue Bar-Code. A lot of great bands came and went and, to this day, I have fond memories of the punk rock, metal, indie and hardcore gigs of times past. I am not so involved with the local scene these days, however there is a quality rehearsal space and recording studio called Clearwater Studios in Perth and still two or three venues putting on bands in the city.

Do you see any major differences in the Scottish scene and the English circuit?

There isn’t a great difference except Scotland is about a tenth of the size in terms of people. Unfortunately, that ratio generally stays true to gig turnouts. But what Scotland may lack in numbers it makes up for in hardcore-ness! 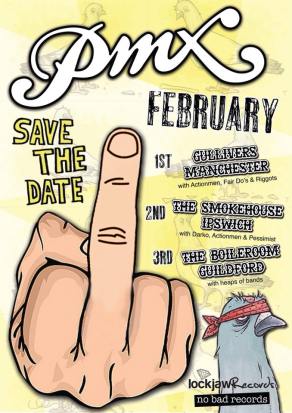 Getting back to the band, you’ve got some tour dates coming up (yay!). A mini-tour with Actionmen in February, Manchester Punk Festival and I heard rumour of a Japanese stint. What are you looking forward to most?

All of the above! Japan is a dream come true. Our records Rise and Shine and The Ballad of Tony Montana were both released on there and I hope, with that, we will be well received!

To make the best record we can and have a blast doing it!

Is there a long-term plan for the band, or are you just intending to see where life takes you?

Absolutely! Live in the moment. Take it as it comes and hopefully make ourselves and others happy in the process!

Check out Part One of our interview for the full story.

Shout Louder are putting on PMX with Darko, Actionmen and Pessimist at The Smokehouse in Ipswich on February 2nd. Come get your faces melted with us! Full details here.

Keep an eye out for them at Gullivers in Manchester on Feb 1st and at Darko’s Bonanza on Feb 3rd, as well as at Manchester Punk Festival. It’s likely that Sarah/Shout Louder will be sinking pints and scribbling notes at all of the above, so come say ‘hi’.

If you want to hear more from PMX (don’t we all?) then make sure you buy a copy of Clochridgestone – your investment in their gnarly live recording now will enable them to fund a new album later in the year. It’s a beautiful business model – support the hell out of it!

Finally, check out Part One of our interview, if you haven’t already!

7 thoughts on “PMX Interview #2: Some Things Always Seem To Change”