The only thing better than an all-day punk show is multiple days of punk shows. Festivals are undoubtedly the most important part of my year. You get to see your favourite bands, discover new ones and if it’s a bigger event there’s a good chance that your friends will travel from far and wide to party together. I love how punks from around the UK are drawn to gigs like Manchester Punk Festival or Wonkfest like a big punk rock Mecca; there’s nothing better than weekends spent watching bands, catching up and crashing on mates’ floors.

Admittedly, I’ve only been to a handful of major festivals this year. This Top 5 is intended to be a personal and somewhat self-indulgent recollection of my favourite bigger events of 2017. Hopefully reading it will bring back some positive memories for you too.

2017 saw the second Wotsit Called Festival – a little DIY fest run by a collective in Hastings. It was a wonderful weekend away by the seaside, without a dull moment musically.

Friday was the huge party, serving as Matilda’s Scoundrels‘ release show for As The Tide Turns. They played an absolutley storming set full of dancing, crowd-surfing, human pyramids and all that malarkey. Following them were Nosebleed who caused their usual well-dressed ruckus, including a stage-invasion, getting out into the crowd and generally causing chaos. Getting to witness two of the UK’s best live acts all in one place in such an intimate setting was really rewarding.

The diversity of the line-up was what bumped Wotsit Called into the Top 5 for me. I greatly enjoyed starting the day with some skiffle covers, followed by melodic gruff from The Dead Anyways and then gradually descending into the entropy of Riggots via Pizzatramp, Natterers and The Crash Mats, among many others. This is still a relatively small punk gathering, but definitely one to watch for next year.

Check out our reviews here: Friday and Saturday.

At the start of Wonkfest I was joking with a friend that it might be funny to find the drunkest person at the festival at attempt to interview them. Later in the evening, I reached the unfortunate conclusion that the drunkest person at the festival may actually be me. As such, my memory of the headline bands is a tad hazy (Wonk Unit played, right?) and on the way home I fell backwards over my own bicycle and got trapped in a hedge for ten minutes. I’m not proud, but I did greatly enjoy waking up bruised, broken and covered in gold glitter. In hindsight, perhaps drinking vodka on the train at 9.30am wasn’t the best idea I’ve ever had.

Although it’s the drunken debauchery that will stick in my memory, the festival itself was as fantastic as it is every year. The gig is split between two stages, running 20 minute sets back-to-back with few breaks. It’s a format that works well, although you do have to skip a band if you want to eat, smoke or drunkenly make out with someone. Matilda’s Scoundrels opened the show with an aggro-folk riot, Spoilers were the closest things to Snuff that you’re going to find apart, perhaps, from Simon Wells playing a sweet acoustic set downstairs. Nova Twins were my highlight for the second year running; they’ve got an unprecedented amount of swagger. Aerial Salad and The Kimberly Steaks played exciting and energetic sets, between them managing to be so close to early Greenday that I felt justified in jeering at all the people paying to watch Greenday at Hyde Park the same night. Finally, the pit for Pizzatramp was one of the most wonderful, enjoyably violent experiences I’ve had all year. We got a huge rowboat, people crowd-surfing on inflatable pizza slices and general elbow-dodging chaos. What an incredible rollercoaster of punk fun. 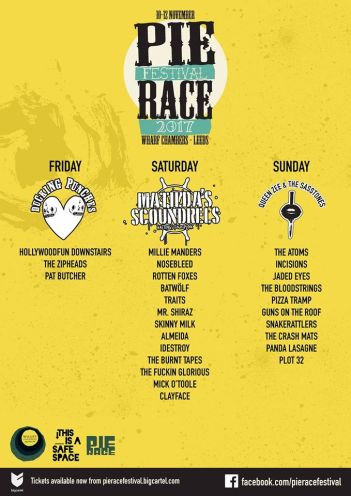 I’ve wanted to go to Pie Race for years, but this was the first time I’d made it up to Leeds for the three-day punk-stravaganza. The heartwarming feeling of being surrounded by mates from far-flung parts of the country can’t be under-estimated, but the line-up was also delightfully varied and exciting.

Matilda’s Scoundrels’ Saturday night headline set was something else – total chaos with every kind of silly shenanigans on display. At one stage the entire room transformed into one big line of row-boats, with an inflatable boat crowd-surfing over us and someone hanging from the iron girder in front of the stage. Spending half a set worrying that all the lighting is about to cut out from the utter chaos it’s generally the sign of a good show.

It was an incredible weekend all round. My highlights were finally getting to watch Incisions, awesome sets from Almeida and The Burnt Tapes, and getting a dance about to Plot 32 with a hangover on Sunday morning. For me what really set this festival apart was the pie itself; I ate five over the course of the weekend, all slathered in gravy and mushy peas. I was bloody fantastic. The race to eat a pie as quickly as possible was hilarious too: all the best kind of nonsense you can enjoy with your mates.

Check out our reviews here: Friday + Saturday and Sunday.

Frankly, I love MPF so much that it’s convinced me to relocate to Manchester. It’s amazing to see how this festival has grown so quickly and the 2018 lineup is looking even better than ever. 2017 saw some incredible headliners, but for me it’s more about reuniting the ever-growing punk rock family from around the country (and abroad) and the smaller underground bands. The after party is where the most exciting performances tend to take place, and this year was no exception with Matilda’s Scoundrels, Clowns, Riggots, Sweet Empire and Chief tearing Zoo apart well into the early morning.

There was so much going on that I had to meticulously plan who I was going to see, and I wound up dragging a bunch of mates around with me. Surprisingly, my favourite band was definitely The Afternoon Gentlemen. I’m not a huge grindcore fan but they were insanely good; it was quite something. Other highlights were Stoj Snak wandering around The Underdog with his guitar, leading us on a merry folk romp, being unexpectedly wowed by Edward in Venice at Gorilla and watching a guy stage-dive into empty space during Pizzatramp’s set. Rocking out for Mighty Midgets fun, as was watching my friends’ faces drop as they witnessed Grand Collapse and Pizzatramp for the first time (“You’re going to shit yourself with joy, pal.” / “You’re right, I just shat myself.”).

I got staggeringly drunk with two of my favourite people on Thursday night and was worried I might have ruined myself, but I somehow got away scot free on the hangover front for the whole weekend! I loved dancing around like a lunatic for Faintest Idea, then getting to dance with Faintest Idea as we all stayed to watch The Toasters. I had a moment of really joyful clarity when I realised that pretty much every single person I know was crammed into the same room on Friday night; you couldn’t walk the halls of Sound Control without stopping to hug five or six people. Whenever I leave MPF I feel like my heart’s going to explode for all the love I have for the wonderful people in my life, and I’m thankful for the opportunity to see them and the best bands the punk scene has to offer all in one place.

This one will be a no brainer for anyone who was there. I’d heard a lot about Punk Rock Holiday in the past, but this was the first year I’ve been able to go, and it completely exceeded all my expectations.

The calibre of the bands was staggering. The music is split between the main stage at night and the smaller beach stage during the day, with little to distract you from the music apart from sunshine and cocktails. My musical highlights were primarily the smaller acts: Not On Tour, Darko, La Armada, Sombulance, Straightline… Of the bigger acts, Teenage Bottlerocket, 88 Fingers Louie and No Trigger were immensely enjoyable. Getting to see Propagandhi also ticked off a long-term life goal for me.

Never before have I been able to combine a love of fast, technical hardcore with a relaxing beach holiday. The festival site on the banks of two glacial rivers, surrounded by lush green hillsides, is breath-takingly beautiful. In complete contrast to English outdoor festivals, the whole affair felt relaxed, clean and safe. It certainly didn’t feel like a big commerical cash-in. It was a gem of a week spent enjoying pure paradise.

I’m not one for resolutions, however in 2018 I’ve resolved to attend more festivals on the European mainland. If you’ve got any recommendations, get in touch.

Check out our other End of Year Top 5s: