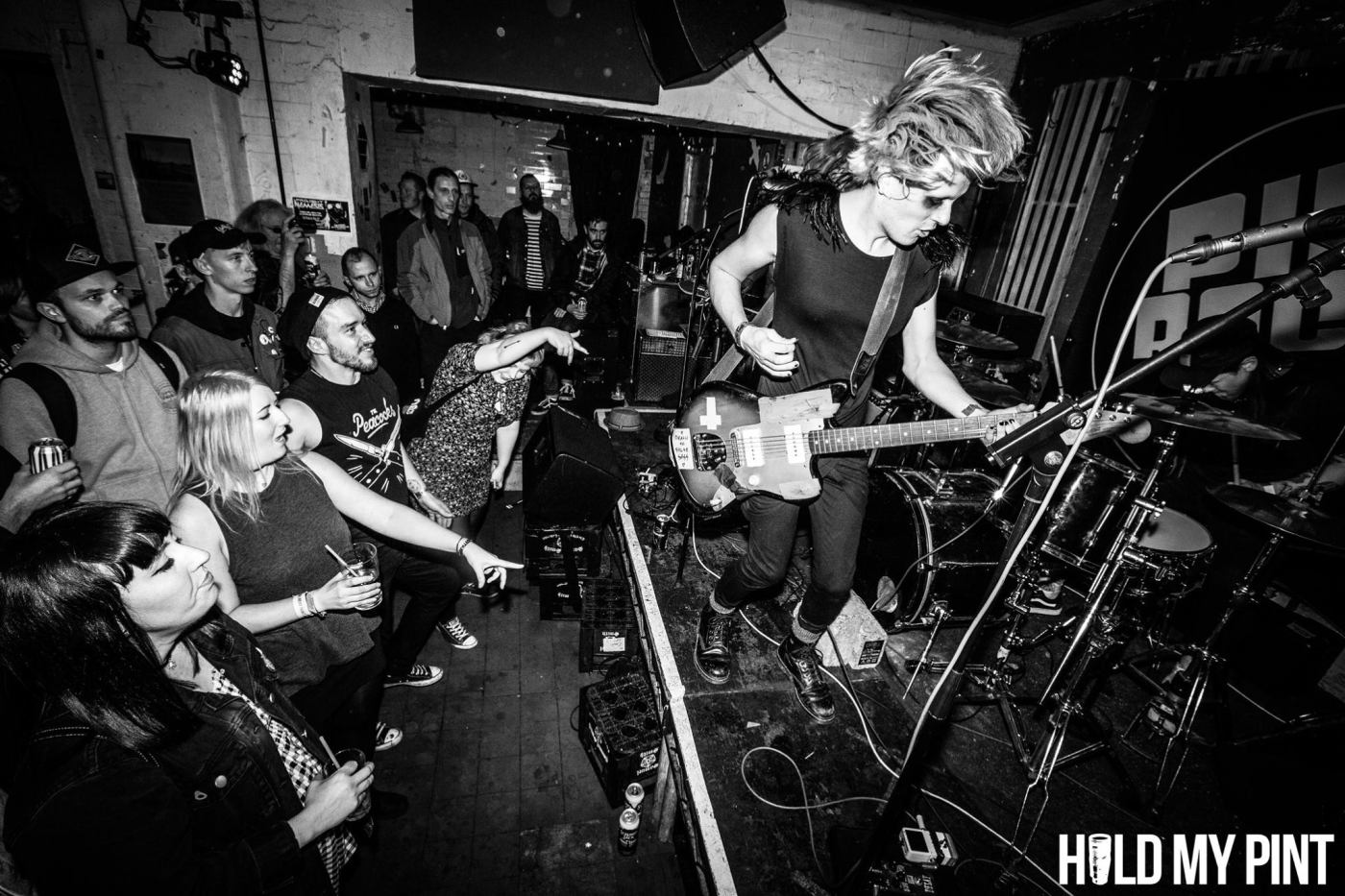 Firstly, check out our review of Friday and Saturday’s Pie Race.

The Sunday mood at Pie Race is notably subdued. People slowly return to Wharf Chambers, begrudgingly accepting the need crack on with the drinking and pie consumption once again. The day starts with a bar full of bedraggled punks nursing mugs of coffee or gingerly pushing their way through their difficult first pint. That said, there is still a buzz of excitement for more noisy nonsense to come. Today’s bill has a distinct sense of fun – plenty of ska, no brutal hardcore – exactly what you need on a rough morning.

I am pleasantly surprised by Plot 32. They spent Saturday spreading the word about their band via the excessive distribution of badges, but playing themselves down by explaining they were so new to music that they’d only just learned to play their instruments. As such, I approached their set with very low expectations and was wowed to discover one of my favourite sets of the whole weekend. The room is full of warmth for this band; they play good, simple ska with a party vibe, perfect for the recovery that the crowd are in need of. They throw a little medley of Operation Ivy and the Vengaboys, plus a perky cover of Catch 22’s Keasbey Nights that’s deeply enjoyable. Just the injection of skanking fun you need after a wild Saturday night.

Whitby’s Panda Lasagne follow them with some standard-but-solid punk rock, apparently playing their first gig in Leeds for 11 years. They’ve got demonstrable hangovers much like the rest of us, but they’re still fun and fast. Tunes like Housewives’ Choice are fun, but it’s rock ‘n’ roll tunes like Witness that really get the room going.

The Crash Mats are exactly what my hangover needs right now. There is nothing remotely sad or downbeat about this brilliant little ska-punk band, it’s all funky bass lines and jumpy upstrokes (with a few bursts of fast hardcore thrown in for good measure). They start off strong with Terry Funk Forever and Party At Lou’s Place early on in the set. They know as well as we do that it’s time for some silly punk shenanigans, and they use all their I’ve-got-a-microphone powers to make it happen. Baz suggests that rather than a human pyramid we create a human sphinx: a concept that’s better in the imagination than it is in practice, although the eager crowd make a valiant attempt. We’re a lot more successful at creating a reverse wall of death – starting off in a mosh pit and ending the song in two neat rows. Soppy Love Song remains my favourite tune, but their closing track Get Me Off This Ride is a close second, describing an LSD-fuelled rollercoaster experience, completed by Baz’s demented laughter over a backing of jumpy ska-core. 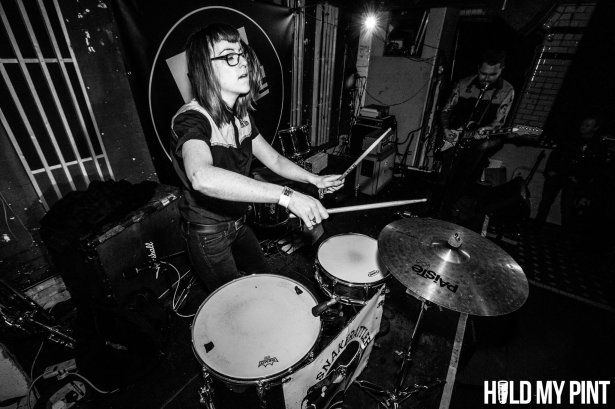 Next up are Snakerattlers, which is the moodier reimagining of The Franceens. They open with a song that is instrumental apart from a series of howled guttural noises, slightly bewildering the audience and warning them that they’re in for a wild ride. There’s a dusty Tijuana vibe to much of their death-punk stylings, conjuring a taste of hot sand and desolation. They perform with just a distorted electric guitar and drums stripped back to a snare, floor tom and a crash cymbal. It doesn’t sound like a lot written down, but it’s played with a captivating spit-in-your face attitude that’s impossible to ignore. Much like a rattlesnake, they’re slightly intimidating, although songs like Let You Go are catchy and danceable. Guitarist/singer Dan Gott falls backwards out into the crowd with his guitar for Rattlerock Rumble, bringing a more intimate element to the performance. It’s extremely cool, sultry, swagger-ful stuff. 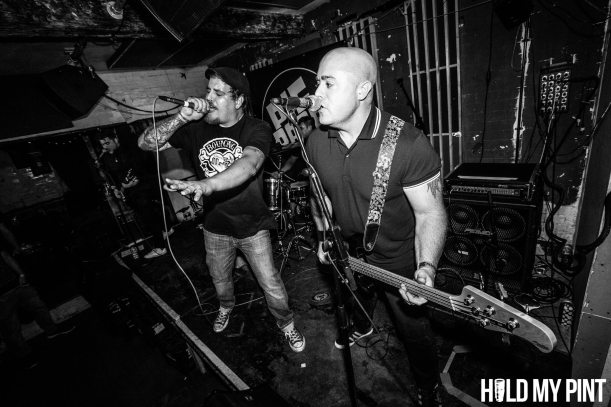 Guns On The Roof completely take me by surprise, firmly landing as my band of the weekend. It’s exciting melodic punk in the vein of Bad Religion or The Bouncing Souls, with a timeless anthemic feel that should probably be unsurprising from a band named after a Clash song. Unusually, the basslines standout for having a simple but catchy Karl Alvarez feel to them. The venue’s full and we get to see the first girder-action of the day, with Plot 32 singer Stache keen to hang upside down from the rafters. It’s angry shout-along fun for the entire set, with chunky rock riffs underlying every song.

At this stage, it worth mentioning a couple of the day’s notable absences. Pizzatramp are due on next, but they’ve not appeared by the time Guns On The Roof finish. Instead, The Bloodstrings start moving their kit in, ready to set up on stage. Poor old Ben Hannah, the organiser in charge of this shindig, is wandering around the venue looking like he’s about to have an aneurism. On the plus side, absentee Georgia Davies has just turned up. The main topic of conversation all morning has been, “Has anyone seen Georgia?” as she had managed to leave on Saturday night without her wallet, phone or a place to stay. After a number of Facebook shout-outs and some concerned souls figuring out how long to wait before reporting a missing person to the police, Georgia suddenly rocks up at 4pm looking absolutely fine. Apparently she’d spent the night sleeping safely behind the bar. 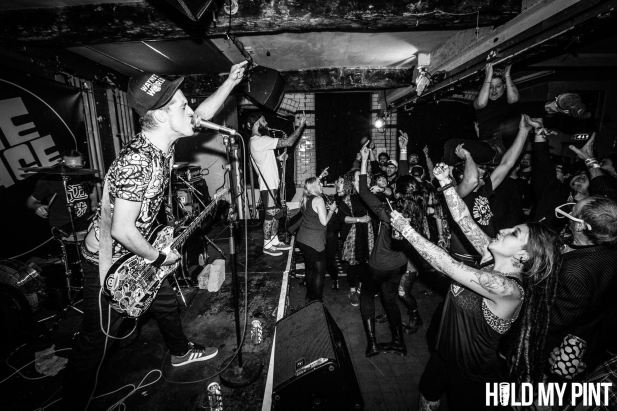 Staggeringly, Pizzatramp turn up the second they’re due on stage, apparently at the expense of a parking fine. “We’re all on a comedown, we’re all hungover and we got here about a minute ago,” explains singer Jimbob. “I’m sure it’s going to be wicked.” They dive straight into Blowing Chunks, a song about not letting a little bit of vomit bring your night out to a halt, which I’m sure we can all relate to right now. For a band that can be relied upon to bring heavy thrash and top-drawer banter to every show, they still manage to inject an unpredictable and vaguely dangerous edge into their performances – like they (or we) might fall apart at any minute. Tying the set in beautifully with the pie theme of the weekend, they do their usual gimmick of running through a few variants of I Hope You Fucking Die. When the band notice recently-found Georgia Davies eating a pie down the front, they launch into a forceful rendition of, “Georgia’s eating pie!” as part of the joke. They suffer a few technical problems with the bass during Tramp Life and Clairvoyant but it’s so fast and hard that it still works. There is a properly rowdy pit for Ciggybutt Brain that’s the most energetic we’ll see the crowd all day. 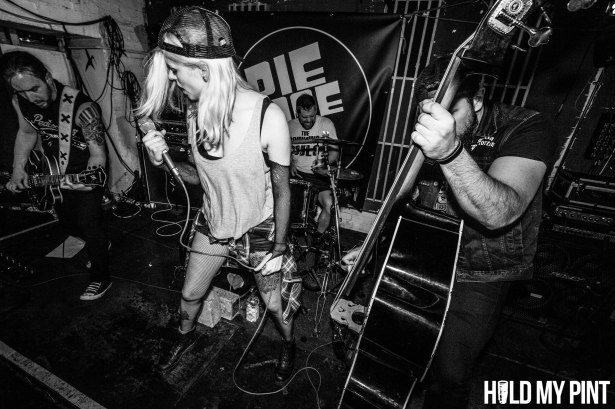 Whenever I hear a band have travelled from overseas I tend to get quite excited, so I’m buzzing when German act The Bloodstrings come on. Unfortunately they encounter some technical problems, which mean that Nosebleed’s drummer Dickie winds up sat on the stage perilously holding the button on a power adapter for the whole set (much to the amusement the rest of us). He saves the show for The Bloodstrings, who play upbeat punkabilly with a coarse female vocal, not dissimilar to The Distillers if Brody Dalle had grown up with 1950’s. They gain a bit of momentum by the end of the set, throwing in some songs that are hard, fast and really enjoyable. 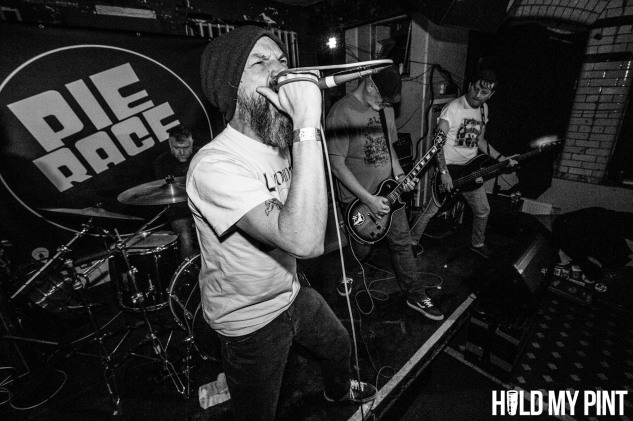 Up next are Jaded Eyes, a gravelled hardcore band, who displayed a lot of more hard rock influences. They layer clean guitars over a heavier backing, tying it all together with a very rough hardcore vocal. The band are little older and more experienced than the rest of the bill, and they clearly know what they’re doing. It’s a ferocious and impressively tight set – they make it looks easy as pie. I Am A Feminist is the stand out song of the set, although they do throw in a caustic cover of The Damned’s New Rose which goes down really well. 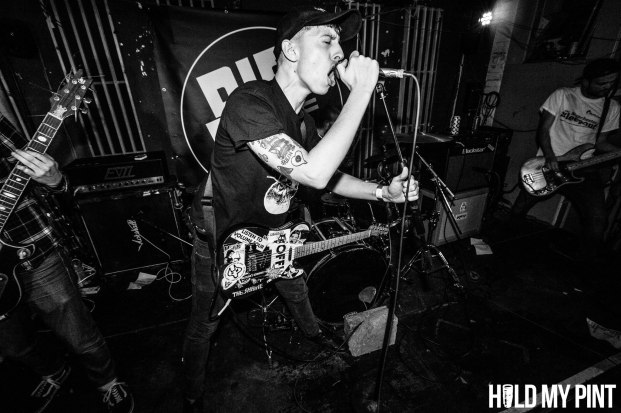 I am overwhelmingly excited to catch Incisions and they do not disappoint. They fill the room with explosively fast hardcore and a fuck-everything attitude. The relatively new 4-piece from Manchester have nailed straight-forward ferocity and memorable choruses in a way that’s immediately appealing. Between songs, singer Jordan Lloyd spits out wry asides that give us all a giggle. He introduces a song by saying, “This one’s called rahrahrahrahrah,” which sums up my entire opinion on punk banter. Fuck The Government gets their point across succinctly, and they throw in a new song that’s heavier and harder and promises big things for the future. They are possibly my favourite new-band discovery of 2017. 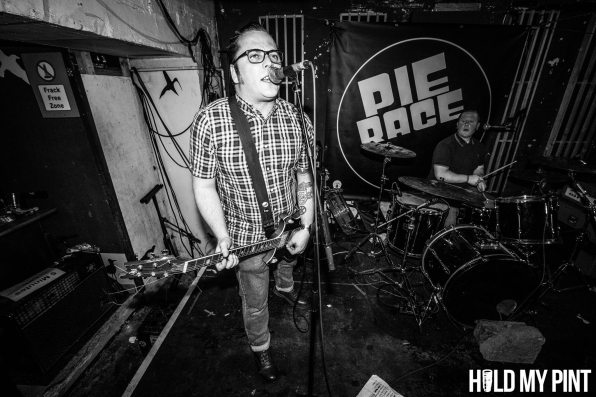 The Atoms are a real treat, playing fast geeky pop punk infused with short bursts of heavier punk. It reminds me of the positive, poppy vibes you get from bands like Teenage Bottlerocket. They’re really good at do-wop style harmonies but it’s the shouty fast sections that I enjoy the most. There are a few less people in the room at this stage; it’s one of the only gigs I can remember attending where there have been fewer people in the evening than during the day. Evidently a lot of people have come from further afield, or are keen to get some rest before work on Monday morning. I’m really glad I stayed for the full weekender as the evening bands have been cracking. The Atoms close on a song called You Must Be A Loser, leaving everyone in a great mood. 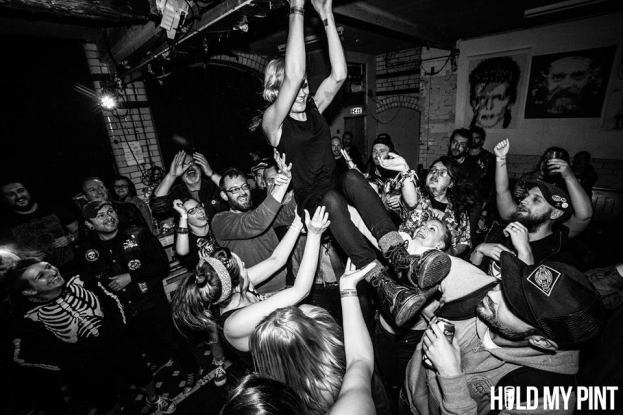 Final headliners Queen Zee & The Sasstones have an impressive reputation as a live band, particularly in the Liverpool LGBTQ punk scene. It takes me a little while to get into them, but by the end of the set they’re my new favourite band. It starts off with a slightly odd horror-punk vibe with heavy and angular guitars, before drifting through some sultry almost-indie into something unique, raw and aggressive that I can’t not love.

Their on-stage chemistry and energy is electrifying; the stage of Wharf Chambers looks like it’s going to collapse, rocking with every jump and dance move the band bust out. There’s a lot of crowd surfing and Zee gets in on the girder-climbing action, hanging upside down from the ceiling mid-song. Their last song Fly The Pink Flag has the whole room heaving, with a proper headbanging beatdown to close the set, but it doesn’t compare to the reaction they receive when they cover Electric Six’s Gay Bar and Dizzee Rascal’s Bonkers in the encore. It’s staggeringly good: raucously energetic, infectiously fun and punk as fuck.

I cannot imagine a more fun way to end an incredible weekend, and there’s no doubt I’ll be back again next year.

Check out our review of Friday and Saturday’s Pie Race.