The Sinking Teeth bring raw post-punk straight from Melbourne, with support from Darko, The Burnt Tapes and Miami Nice.

Review by Sarah. Photos… also by Sarah. Prepare yourself for some truly terrible photos.

After a long week, sometimes small rooms full of big noises are exactly what you need. I’m just about coming to terms with the dark October nights and I’ve said a fond farewell to beer garden season. Shoreditch still looks colourful on a Thursday night, and the glowing lights of The Old Blue Last are like beacon of hope on this chilly evening.

I hadn’t heard of Miami Nice before this show, and I’m thoroughly impressed the second they hit stage. It’s certainly far better than I had expected from a band opening a free show organised at short notice; they’re fantastic. Once I discover that these locals have previously been in bands like Young Conservatives and Grand Central it’s less of a surprise, and everyone I speak to sounds equally impressed. The singer has a raw, stony quality and he belts out words with a huge weight of force and emotion behind them, sounding like his voice could crack at any moment. The band has some fantastic bluesier melodies in the backing, particularly on some of their later songs. 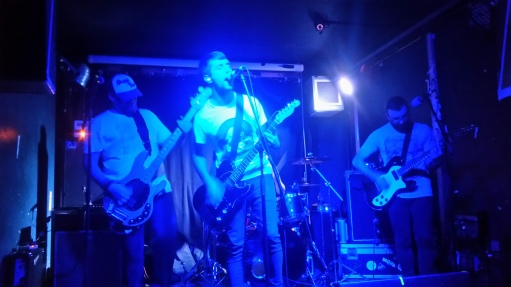 I’m not going to lie: I’m a tad obsessed with The Burnt Tapes at the moment. Alterations has had so much play on my iPod recently that I think it’s permanently etched on my eardrums. Their signature gritty lead-vocal swaps between Pan and Phil give them a unique edge, showcased early in the set on Ghosts. It might be one of the weaker moments on their EP, but has some strong shout-along potential live. Similarly, Oh Marie has an enormous regret-fuelled chorus that grabs your heart and squeezes hard.

Throughout the night, all the bands are drowned in the classic blue lights of The Old Blue last, and at no point is it more fitting than for The Burnt Tapes. They’re the masters of sad punk, transforming some deeply depressing themes into songs you want to dance to. Phil introduces a song by saying, “This is a sad one…” Normally that might be a bad thing, but I’m immediately filled with excitement knowing they’re about to play Things Get Weird. The chorus is so visceral that you can nearly feel the broken teeth in your mouth as you sing along.

I’m chuffed that Darko have trekked up from Guildford for tonight’s show, as I never get sick of watching them. This is a bit of a contrast to the last two times I’ve caught them (PRH and Punkle Fester): it’s a much smaller venue and a smaller crowd, but they still give 110%. Opening with Just A Short Line, their set is a whirlwind of fast melodic hardcore, punctuated by moments of marvellous technical skill. The intro to Timepieces & Lock Shaped Hearts is enough to make my heart leap straight into my mouth, and Dan’s lyric, “Scream my lungs into this void,” seems particularly apt when they hit some technical issues. It sounds like the force of his voice has pummelled the mic into submission, although it turns out to be another cable.

If feel a bit self-conscious singing back the words in a room this small, but Darko are incredibly good at writing songs that you want to belt out at the top of your lungs. Karl’s harsher backing growls are the most fun to shout along to, especially on songs like Lifeblood. For me the highlight is Chewbacca Defence played back-to-back with I Knew I Should Have Taken That Left Turn At Albuquerque, the latter underscored by some awesome dual guitar runs. Watching Rob and Chris’ hands move across the frets in synchrony is mesmerising and oddly satisfying. 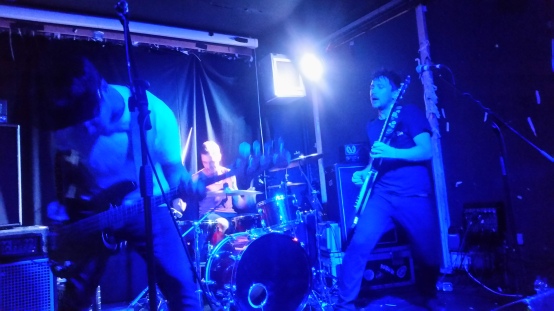 After a pause long enough to changeover the stage, and to allow the other bands time marvel at their impressive pedal boards, The Sinking Teeth get started. They jokingly say, “This is possibly the coolest thing we’ve ever done,” as it’s their first London show, one of a handful of European dates they’re playing.

I’ve heard a bit from The Sinking Teeth before but I’m no expert – which is fantastic, as I’m thoroughly floored by their live show. They bravely open on a mostly instrumental tune, getting all post-rock and giving us a taste of the chunky, growling chords and heavy resonance we can expect from the rest of the set. On their other songs, they switch vocal duties between all three band members, adding a pleasant duality to their sound. Guitarist Nick Manuell does the bulk of the singing, switching from rough emotional growls to more melodic moments to match the dynamics of their songs. It’s more raw than Gnarwolves, heavier than PUP and more organic than Refused, with an underlying groove that’s almost Queens of The Stone Age. For me the song of the set is The Bottom of The Lake. They say is about drowning, and it genuinely feels like it. Starting with slow, moody vocals they then drop full-pelt into a pool of heavy atmospheric noise; you can feel the water filling your lungs.

Nick takes a break between songs to say that he assumes anyone who’s out at a punk rock show on a Thursday night probably has a person buried inside them that wants to break things, and he’s probably right. He encourages us all to get up on stage and ‘break shit’ – literally break his arms – on their song Pavement, which is a huge tour-de-force of a song. ‘Shit’ remains unbroken, apart from my expectations, which are totally shattered by how awesome their set is.

Unfortunately I have to make a dash before the end to catch my train, but it’s been a brilliant evening of fast melodic punk. What more can you ask for on a Thursday?