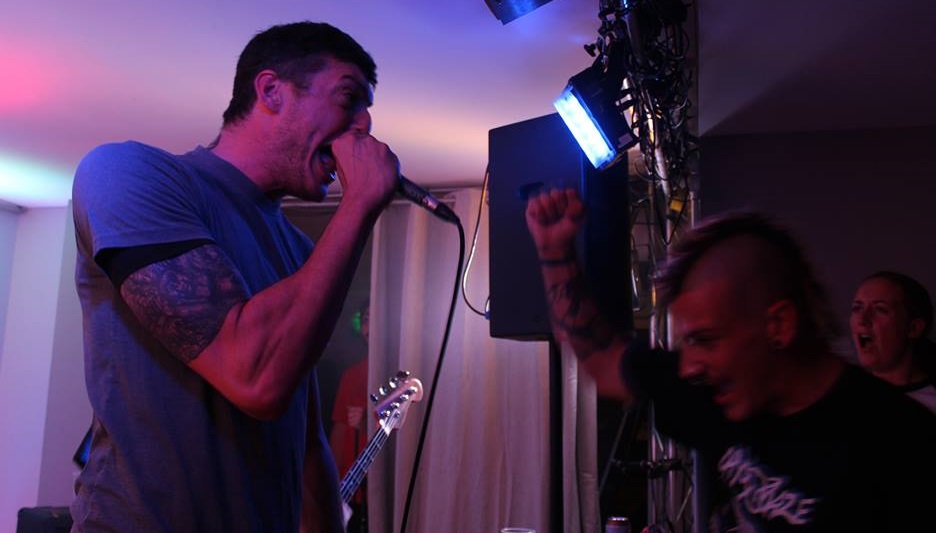 It’s a grey, overcast Thursday in October. You’ve been chained to desk for eight hours, battered with spreadsheets, deadlines and inane office chatter. Your eyes sting from the air conditioning, strip lighting and screen glare. The phone rings incessantly and you’re hoping your boss hasn’t noticed you muttering ‘wanker’ every time you hang up on someone.

At the end of days like these, The Smokehouse in Ipswich is the light at the end of the tunnel. The endorphin rush you achieve at these shows is worth every second of your mid-week wage-slave drudgery. Tonight is especially exciting: Grand Collapse have travelled all the way from South Wales to jolt us back into reality with an insanely fast barrage of thrash mastery. Joining them are Spoilers, undoubtedly one of the most consistently great punk bands in the UK, plus local shouty legends Casual Nausea. Uncomfortable Beach Party Promotions have pulled another banger out of the bag.

This is Casual Nausea’s first Ipswich show this year, plus their first local jaunt with new bass player Matt Kemp. As Spoilers put it later on, Casual Nausea are both, “The hardest sounding band and the loveliest bunch of people.” There is a palpable warmth and love in the room, with many of the local punks getting down early to catch the whole set. I have to fight my way to the front and through to the bar, it’s packed already.

The Smokehouse hasn’t got a stage to speak of, just an area behind the PA where the drumkit and the musicians typically reside. Throughout the evening the acts disregard the little barricade of monitors, with singer/shouter Simon being the first to get out into the crowd, trailing a long mic-lead. His antics get the rowdy dancing started down the front, setting the scene for a chaotic evening of elbows and shout-alongs.

It’s an enormously fun set to stomp along to. DIY or Die is a jumpy, hip-shaking riot. Move On, with the repeated chorus, “Fuck xenophobia,” gets their point across in a super-fast frenzy of noise. Simon’s nasal snarl works well in combination with Zoe’s more melodic singing, blending to make an unrelenting, unstoppable force. There’s a strong sense of fun in many of their tunes, not least Benefits Benefit No-One (on the subject of whales), which is a huge boot-stomper of a track. Simon takes a start-your-own-pit approach by hurling himself into the front row of the audience as it all descends into demented gypsy ska for a few bars. There’s so much energy, anger and fun in this band that there’s very little not to love. 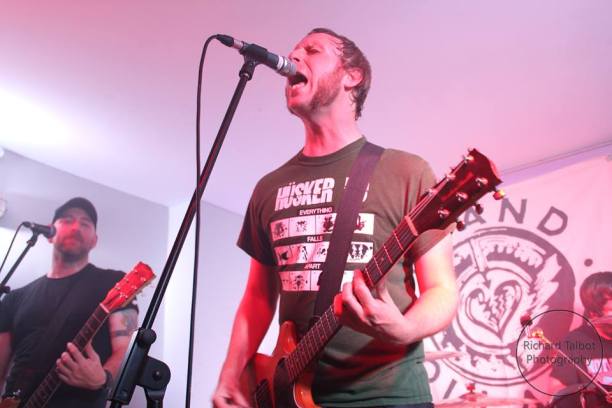 I have never seen Spoilers deliver any less than 100%. They’re consistently excellent, always bringing a fun, fast show of classic British melodic punk. They open with Short Cuts but it’s Stay Afloat that really gets us all dancing. As is guaranteed at a UBP gig, there is a wall of people dancing in the front row as close to the band as possible – we’re a keen bunch in Ipswich.

Freaked is an instant-classic that has us all shouting along and inspires the first successful human pyramid of the evening; there’s nothing quite like winding up in a heap of sweaty mates on the floor to make your evening. One major advantage of having a bespoke music venue in a small town like this is that the sound out-front is perfect. It’s loud but with every note audible, especially the backing vocal and Dan Goatham’s gritty lead singing cutting through the mix, perfect for shouting along to. It makes a huge difference to your average back-of-a-pub punk show.

Spoilers dedicate Who’s To Blame to local lovelies Tammy and Mike, complaining that they weren’t invited to their wedding (they were) – it says a lot when you can take a pause between songs to hug a member of the audience. Their set culminates in arguably their most popular and definitely most anthemic song, Punks Don’t Die, always performed in memory of Davee Wild, a legendary punk promoter from their hometown of Canterbury. 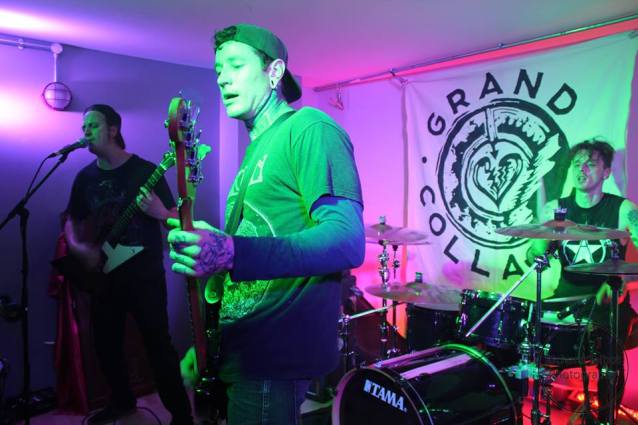 Grand Collapse arrive on stage like a freight train careening off the tracks. They take more musical influence from metal bands like Slayer and Death than they do punk, but augment it with all the bitter, intellectual fervour of stalwart political activists. That’s further enhanced by their extraordinary skill – they make it look easy to navigate complex twist, turns and time changes. You can hear every bass-note that’s shredded in clear detail, and all their songs are overlaid with outstanding 6-string licks that hark back to ‘80s metal. It’s this attention to detail that makes Grand Collapse one of the most intimidating talents in the UK hardcore scene right now.

You can sense the anger and frustration resonating in tonight’s audience, using this opportunity to unleash hell on each other down the front. The Smokehouse is quite a narrow venue with a slippery floor, and there are literally people pitting by hurling themselves from one wall into the other at one point. The ceiling is so low that all the keen crowd-surfers get thrust face first into the ceiling and held there, as is Ipswich tradition. It’s one of the most violent reactions I’ve ever seen at The Smokehouse, and the perfect response to Grand Collapse’s ferocity.

Between aural assaults, Calvin gives us an insight into the reflective, thoughtful nature of the sentiments behind the songs, but including a spoken word rendition of the lyrics to Along The Dew and an explanation of the grief and heartache that inspired Memoirs of Heath Park. The pinnacle of this is his introduction to their brutal track Chalk and Flint, which describes the clashes between anti-fascist and anti-migrant groups in Dover last year. He calmly explains that the song reflects on those events with a sense of sadness, rather than the the anger and frustration they deserve, building himself into an indignant fury before the song drops. Grand Collapse are always stunning, but it’s moments of vehemence like these that give them a depth far beyond your average thrash band. I will never get sick of watching this and I cannot wait to see what they do next.