Part 2 / 4 of my PRH writeup, featuring Not On Tour, Face to Face, Good Riddance and an entire paragraph on the subject of melon balls.

Welcome to Part Two of my Punk Rock Holiday writeup.  Make sure you also check out Part One, Part Three and Part Four.

Today is the first serious band day for me. After a good long sleep and a quick trip to the shop for supplies, I’m feeling fresh and ready to go.

The primary daytime activity at Punk Rock Holiday is recovering on the beach, wearing your hangover like a badge of pride. The sand is populated with inflatables: boats, rubber ducks, unicorns – you name it. Festival-regulars load their vessels with beer and float downstream from the campsite to the Beach Stage, dodging the checkpoints where they confiscate cans on the way into the arena. Genius.

I enjoy watching Acid Snot rinse through some technical pop punk (yes, I did just say that) in the dappled shade of the Beach Stage. This foursome from Barcelona bring the party-vibe: they pull off an amazing medley of Superman, Take On Me, One Love and Rhythm of the Night with some seriously sweet, fast-as-fuck saxophone. Resident wheelchair hero, Richie Parker, joins them on stage to juggle water balloons – a big favourite with the crowd. It’s novel watching a heavier band playing in the sunshine, although it’s just as sweaty as a tiny basement show.

Greek 4-piece Day Oof pull a decent crowd for their fast, technical skate-punk. They err on the melodic side of Darko’s style, with a lot of sex-jokes thrown in. A guy stagedives using an inflatable crocodile as a raft, successfully making a full loop to the bar and back to the band. The singer asks, “Is there anyone here who’s never stage dived?” Total silence. There are very few places where I’d believe that, but this is one of them.

German melodic punks Teenage Love Guns are fast, fun and not a million miles from Bad Religion – one of my clear favourites of the afternoon.  It’s nice to see a singer doing just that: performing without an instrument allows him to inject extra energy into their live show.

The audience really perk up around this time, visibly recovering from last night’s antics. Not so coincidentally, this is also when we discover the magical panacea that is the melon ball. This thirst-quenching combination of vodka, midori and pineapple juice may not sound like the most ‘punk’ of beverages, but holy hell they’re great. I could write sonnets for this drink. There’s a whole range of cocktails available, served by the pint: exactly what you need to gently escort you from hungover to drunk in holiday style.

Between sets on the Beach Stage I catch Mike Moak from After The Fall performing acoustic over on the far side of the beach. He rocks through Dedication, my top ATF tune, a sweet cover of Jawbreaker’s Do You Still Hate Me, plus an awesome punk-rock love song which I gather is named 80-85 after the Bad Religion album of the same name. It features a run-down of top all time punk albums: “You’re my Milo Goes to College… You’re my 80-85…” and I absolutely loved it. If anyone can tell me what that last tune is, I’ll make it the first dance at my (non-existent) wedding.

Next I watch Slovenian 4-piece Start At Zero playing some energetic, melodic skate punk, before taking a little yoga interlude on the beach with Jo of Bad Juju Yoga. Unfortunately we’re interrupted by a guy who thrusts in and asks if we can do the sort of yoga that ‘involves his dick’. He’s immediately shut down, but we’re left wondering what the fuck guys round here think is normal behaviour, especially when the yogis are mostly male. Having stretched and realigned, I go to watch a mosh-tastic show from Leeds crew Higher Power. They play great, heavy hardcore, spun with some interesting grungier chords. 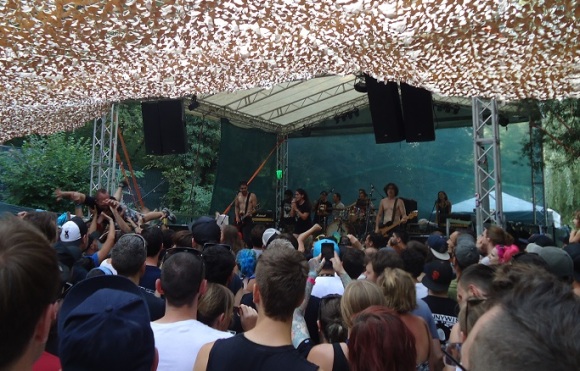 Closing the Beach Stage, Not On Tour smash through the best set of the entire week. I catch my friends gaping and saying, “Shit! Shit this is fucking good!” This Israeli group are gaining themselves a big reputation, and they get the best turnout of any band on the smaller stage. Singer Sima Brami, has a unique and captivating voice – every note is laced with fury, yet she articulates clearly through every verse. In short, Not On Tour sounds like an angry Gwen Stefani singing for Descendents. They are firmly rooted in old-school 80s pop-punk, with a strong anti-fascist ethic and a huge future ahead of them. Without question, they’re the band of the week, bar Propagandhi.

We relocate over to the mainstage just in time for No Trigger. I’ve been looking forward to seeing them, but they’re even better than I’d expected. Older tracks like Fish Eye Lens hit the melodic hardcore mark, while new material like the instant-singalong Dogs on Acid aces the pop-punk test. It’s also touching to hear vocalist, Tom Rheault, saying that playing Punk Rock Holiday is a personal achievement for him. He was here as a punter last year, standing in the rain with everyone else for Descendents’ set. After playing together for 20 years and then breaking up, he says PRH is what brought them back together for a new album and a tour. I’m very grateful they did.

Following No Trigger, Boston old-school hardcore act Slapshot make me want to stomp around in a Jason Voorhies mask, throw myself offstage and choke-slam Milan Lucic. They’re one of the heavier bands of the week, delivering infectious, grinding hardcore.

Face to Face are another of my top bands of the week. It’s a tight live show: their solid Californian punk rock is the backbone of this scene, and their casual professionalism shows. It’s great to hear them delving into their back catalogue, too. They play a lot off 1995 album Big Choice: You Lied and Disconnected have me pogoing and shouting along, trying not to spill lager on myself.

Anti Flag give a reliable show filled with singalongs, rousing political speeches and more whoa-oh’s than all the other bands combined. They get The Press Corpse and Confessions of an Economic Hit Man out of the way early on, which is a little frustrating as they’re my personal favourites. Just as I catch myself wishing they’d play a song that was little less Anti-Flag, they do throw an very unexpected cover of Chumbawumba’s Tubthumping.

Good Riddance are consistently good, although one of my mates does question whether they’re really festival-headline material. I totally disagree – I think they storm through their extensive repertoire with aplomb, and they have fun doing it. It’s fast, catchy straight-up punk apt for shouting along at the top of your lungs. Favourite Son and Fertile Fields both cause chaos, and they predictably end on Mother Superior, which we’re singing the whole way home.

We head down to the Beach Stage for the after party however, after Monday night’s excesses, the hipflask of rum I’ve been swigging doesn’t seem to be having an effect. I’m disturbingly sober for the third night of a festival, which probably isn’t a bad thing. The moon’s high in the sky, eerily illuminating the beach and the river. I perch on a grassy outcrop and watch people skinny dipping while Jon Strader from No Trigger DJs in the background. The immediate looks of regret when they jump in the glacial water are priceless.

Check out the other instalments: