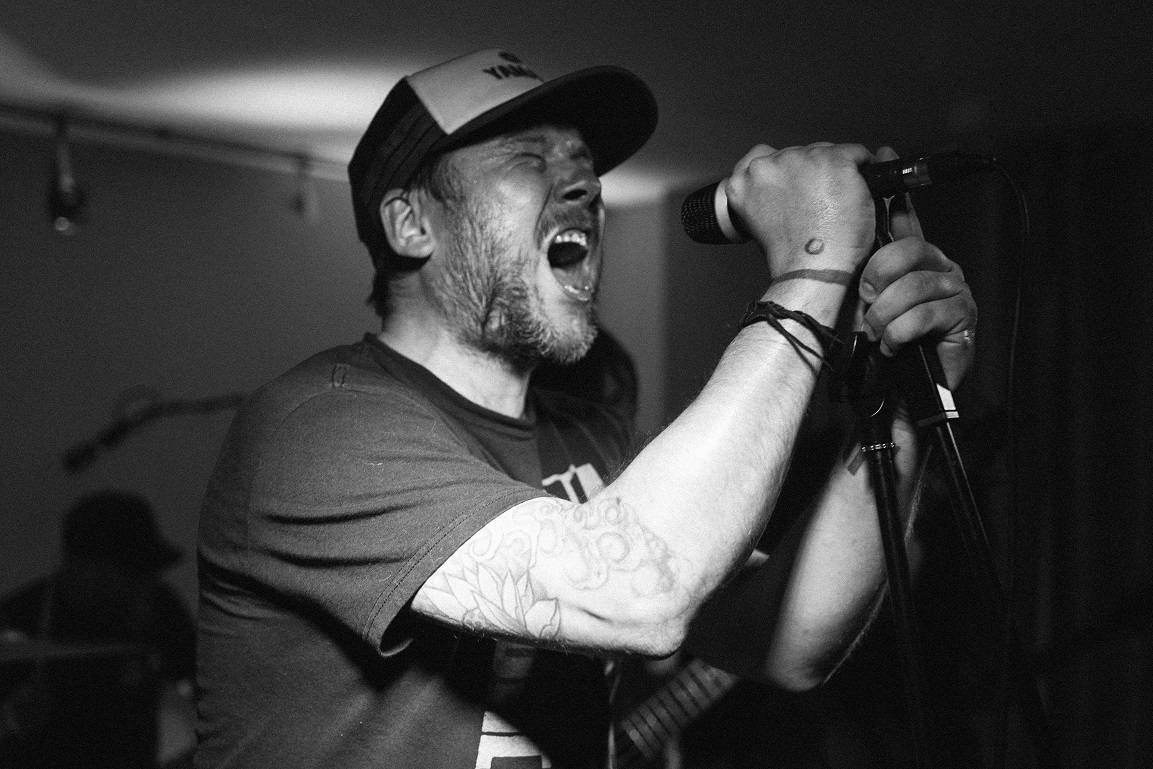 Another Saturday, another trip down The Smokehouse. It’s starting to feel like a second home. 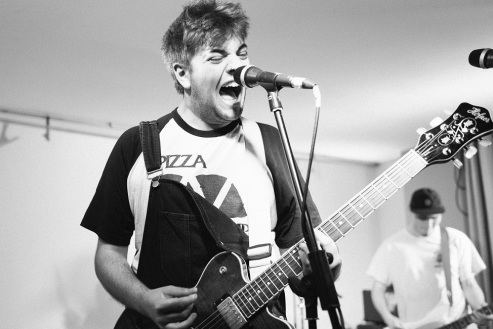 Aerial Salad have so much potential it hurts. The three-piece from Manchester are four days into their first proper tour. Before the set, frontman Jamie Munro tumbles out of the venue, bubbling with anecdotes of tour debauchery and 8am facedrugs. [EDIT: Jamie would like to point out that he was not a fan of the guy snorting pills for breakfast. Poor life choices right there.]. He’s concerned that he’s not going to last until Wonkfest next weekend. They’re a young bunch but they’re growing into the rock ‘n’ roll lifestyle damn quickly.

Growing is something they’re doing a lot of: I’ve seen them a few times in the last year and every single time they get better. They’ve been playing together since they were 14, and when their set kicks off you can immediately feel their untainted youthful energy and passion. Recently, they’ve been playing increasingly bigger line-ups, including a show with Bouncing Souls and a slot at The Fest in Florida. This tour celebrates the release of their first album, Roach, which is now out on Alex Wonk’s label, Plasterer Records.

They perform an entertaining set of stomping pop punk, of the Teenage Bottlerocket / early-Alkaline Trio variety. They sound a hell of a lot like Greenday, but in a good way rather than an overly-derivative-3-chord way, or an American-Idiot-eyeliner-overload way. They give me a massive urge to get high, play Tony Hawks and eat too much pizza.

Lyrically, they tap into a relatable angst that will resonate with anyone who remembers being a moody, sexually-frustrated 16-year-old. Songs like Success and Conservative Thinking get us all moving. New single Check my Mind has some delightfully warm bass and raw vocal breaks, in the vein of Nirvana or The Pixies. They’re endearingly rough around the edges; you know they’re here to play and to party, and it’s okay that they make a handful of mistakes.

I look forward to catching them in 20 years, when I imagine they’ll have been wrecked by their own success: harrowed by over-indulgence and still singing about teenage break-ups. 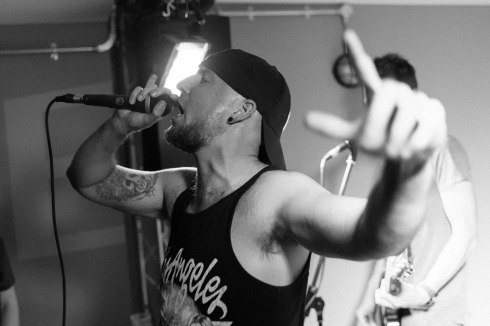 I’m seriously excited to see The Kirkz playing in Ipswich, primarily because I’m surprised they’re allowed out of Macclesfield. Their Rancid-meets-Rise Against metal-tinged punk could wake up the sleepiest of crowds. I’m bouncing around with my fist in the air from the first beat. Their set is a wild ride through their back catalogue, with their singer joining us in the crowd a lot of the time. He takes a shine to one of the local lads, telling him, “This is your time, son,” causing the first pit of the night to open.

The Kirkz are notable for having stubbornly out-lasted the vast majority of bands in the scene; they are the brilliant, unstoppable cockroach of the punk apocalypse. Unphased by exciting new trends and genres, they’ve carried on doing their own thing for nearly 20 years and, as a result, they’re really fucking good at it. They play with a huge amount of energy and vigour, and a causal professionalism that stems from their longevity.

Their endurance has also led them to be ironically egotistical, most evident when they shout the opening lines of Buenos Dias Motherfuckers: “It’s my pleasure to introduce the greatest band in the word – we are The Kirkz!” They are so proficient in taking the piss that their bravado’s endearing. They even have a NOFX-style biro-on-lined-paper backdrop, so small that you can hardly read it.

Their classic take on hardcore punk slots in well with Vanilla Pod on a bill, but they wouldn’t be out of place with Good Riddance, Consumed or even System of a Down. Every song is fast-paced and catchy as fuck. Newer songs like Tanks & Machinery are full of contagious shout-alongs and tense riffs. On 1998 they drop in a little skacore, reminiscent of Random Hand or The Junk. It’s an intensely fun, angry and beer-soaked performance. 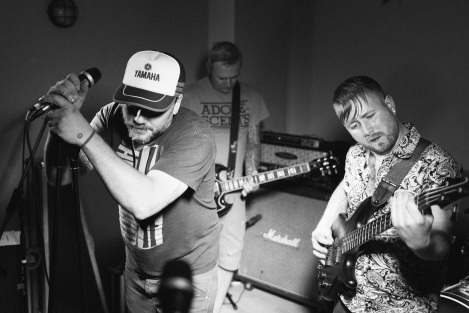 Vanilla Pod are the perfect contrast to newbies Aerial Salad. They are well-respected skate punk veterans who, despite putting up with each other for over twenty years, maintain an energetic and youthful feel. I have vague memories of ‘discovering’ them on a free Rock Sound compilation CD at approximately age 13. I was shocked that I could see a band from a magazine playing down the road from my parents’ house for a fiver: one of my first introductions to punk.

Hailing from Kings Lynn, they’re especially popular with the East Anglian punk crowd. Lots of less regular gig-goers have come out of the woodwork for the evening. Once the jokes about venturing south of the Norfolk border are out of the way, they crack into a faultless, energetic set full of new tunes and old classics.

There’s a point during their first song, Saturday Night, where I suddenly realise I will be unable to stop singing along for the next thirty minutes. This is straight-up skate punk at its absolute best, with the catchiest riffs and most anthemic choruses you could ask for. That being said, the most infectious moment is when they throw in the riff from Slayer’s Raining Blood – successfully earworming many of us for the next week. 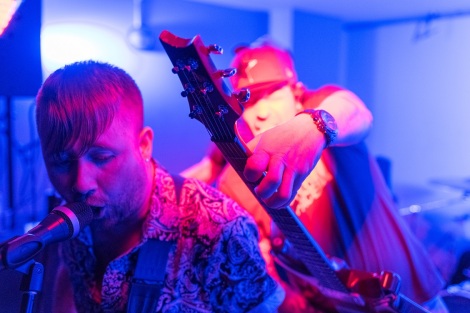 They play some newer tracks, including Deaf Lugs, Wishing Well and A47 – all of which fit perfectly in with their older material. Surrounded by Idiots and Waterdown send the crowd into a frenzy, and everyone bounces around for Big Decision. In traditional Ipswich style there are human pyramids, piggybacks, and a valiant attempt to get some new footprints on the white ceiling. Those of us down the front have shouted our voices hoarse; I’m unable to quit grinning.

Vanilla Pod close with their sublime classic Dead End Town (probably a teenage anthem for every East Anglian kid in the room), finishing with a shout-along to, “I’ve gotta get out of this town FOREVER.” Watching Vanilla Pod is a fast, bouncy, sweaty experience. I don’t know how they manage to keep it fresh, but they sound as relevant and exciting as when I first heard them on that Rock Sound compilation 15 years ago.

Aerial Salad’s new album Roach is out on Plasterer Records. The Kirkz’s latest album Unregrettable is out on TNS Records, as is Vanilla Pod’s latest long-EP Seeing Out The Sunrise.